Reverse osmosis (RO) and deionization (DI) water treatment processes have found wide spread acceptance among aquarium hobbyists, and especially among reef aquarists, for many reasons. A properly functioning RO/DI unit can deliver water meeting rigid criteria for ‘pure’ water, does so at a modest price, and requires no operational skills. 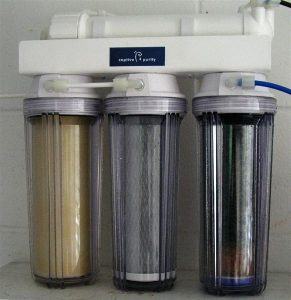 Figure 1. Not a glamour ad photograph – this Captive Purity Reverse Osmosis Device has treated thousands of gallons of water.

As saltwater aquarium hobbyists, we need pure water for a number of reasons. Perhaps the two most important are for ensuring that freshly mixed artificial seawater is not contaminated with various chemicals commonly found in tap water. Secondly, we do not wish to add tap water’s chemicals when we ‘top off’ an aquarium to make up for water loss due to evaporation. Just what is in tap water that we want to avoid?

Before answering this question, almost every public and private water supply company is regulated by the Environment Protection Agency (although some very small systems are not). Minimum standards have been set in order to ensure that your drinking water is safe. For instance, water utilities must check the amounts of copper and lead found in drinking water. Copper and lead are usually not found in ground or surface waters, but instead are generally a result of degradation of copper pipes and old solder joints containing lead. If concentrations of lead and copper exceed a given amount in a certain percentage of homes, then the utility must develop and implement a plan to reduce these metals’ concentration. This is usually accomplished by chemically treating the water to minimize pipe corrosion, and can be done with a number of compounds, including those containing phosphorus, zinc or tin. After the treatment process has had time to work, the pipes are coated with, say,
phosphorus, corrosion is minimized and copper and lead concentrations meet safety standards. Phosphorus is benign and is not a regulated substance in tap water – but it is a critical element for algal growth. Some areas will have naturally occurring compounds such as iron, sulfur, etc., or, as the case here in Hawaii, nitrate and fluoride. This list could go on and on, but I hope the point is clear – we can have safe drinking water, but it is not really acceptable as aquarium water when we want to control algal growths and minimize accumulations of certain elements due to evaporation and contaminated make-up water which results in ‘cycles of concentration’.

Captive Purity has been around for a number of years (reference one of their advertisements in a 2000 issue of FAMA), yet their name recognition is not equal (at least to me) to that of some other pet industry suppliers. When considering a replacement of my ancient RO unit, I considered the purchase of several brands. Price was a consideration and Captive Purity’s units were substantially less expensive than their competitors. But quality was an unknown. I decided to purchase a Captive Purity RO and DI unit and put it to the test. This would be a tough test too, as the tap water is chlorinated and has a high total dissolved solids (TDS, nearing the EPAs secondary standard of 500 mg/l) content, relatively high chloride (due to saltwater intrusion), silica, and nitrate.

There are many parameters to test when determining water quality. I decided to check for these:

Here are the results for each item:

Conductivity, or Electrical Conductance, is the ability of water to conduct an electrical current, and is reported in units called micro-Siemens per centimeter (µS∙cm) at a given temperature (25ºC). If the water is really trashed with conductive compounds, conductivity could be reported in milli-Siemens per cm, or mS∙cm). It may come as a surprise to many that ultra-pure water will, for all intents and purposes, not conduct electricity (However, water contaminated with any number of compounds will conduct electrical current – we know that – we’re conditioned to the old movie plot where the radio falls into the bath. If the girl in the tub had only used ultra-pure water instead of taking the bubble bath…).

Conductivity is measured with a special sensor, and it is inversely proportional to water purity – the higher the conductance, the less pure the water is. See Figure 2. 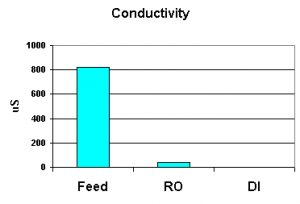 The resistivity of absolutely pure water is 18.2 MΩ∙cm (meg-ohm per centimeter). Resistivity values as high as 7.3 MΩ∙cm have been noted in the discharge of Captive Purity’s deionization unit, but is usually lower (~5.2 MΩ∙cm). This value meets the definition of ‘pure water’.

Salinity is usually considered to be a measurement of the mass of dissolved salts in a given mass of solution (water). Simply evaporating the water away and weighing the residual salts is not particularly accurate. Complete chemical analyses are expensive, time-consuming and offer little advantage over the method used in this report: Conversion of conductivity to salinity, using the Practical Salinity Scale 1978. Fortunately, the meter used (Hach HQ40d multi-meter) is programmed with this conversion and a simple push of a button reports salinity in parts per thousand (ppt).

In this case, salinity is due to seawater intrusion into the freshwater aquifer. Freshwater, since it is less dense, floats on seawater beneath this island. This floating freshwater is called the basal lens. When freshwater is rapidly withdrawn (in this case, by pumps supplying drinking water to the island), seawater is locally pulled upwards, and the aquifer is contaminated with saltwater. Obviously, this is not a good situation. Persons limiting their sodium intake are affected, and, when there is not treatment of top-off water in an aquarium, the sodium chloride content increases.

This RO/DI unit was very good in removing salinity. The RO membrane removed 95% of salinity, and the DI cartridge removed some of the remaining salts, with an overall removal rate >99%. See Figure 3. 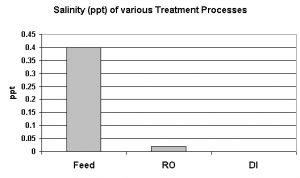 TDS is a measure of inorganic salts dissolved in water, and is expressed in units of milligrams per liter (mg/l, which is about the same thing as parts per million). The higher the TDS in mg/l, the higher the concentration of inorganic salts. The EPA has established a secondary, non-enforceable standard of 500 mg/l TDS. The feed water to the RO/DI unit was 401 mg/l (80% of the EPAs maximum concentration). See Figure 4. 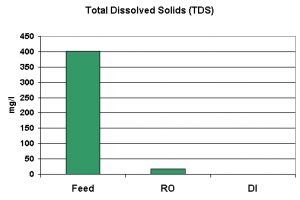 Nitrate in many drinking water supplies is relatively high on the Big Island of Hawaii. This is due to leaching of nitrate from relatively young volcanic rock by rainwater; however, the groundwater pumped in this particular district is not among those with concentrations approaching EPAs Primary Standard (enforceable) of 10 mg/l NO3-N. 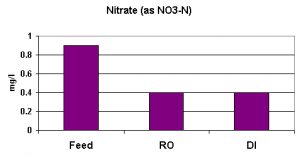 Figure 5. Nitrate removal by the various stages of water treatment.

Phosphorous is sometimes added to a water supply in order to prevent corrosion of water pipes. This is not the case in this instance. Results (not shown in chart form) were at 0.02 mg/l phosphorus (as P), which is below the detection limit of 0.14 mg/l. Therefore, results for all three streams are reported as <0.14 mg/l P.

pH, as we know, is a measure of hydrogen and hydroxyl ions on a scale of 0-14 standard units. A pH value of less than 7 is considered ‘acidic’ and those measurements above 7 are said to be ‘basic’. A measurement of exactly 7 is called ‘neutral’. pH is usually checked with an electronic meter using a probe specifically designed to report pH. However, see comments in the ‘Methods’ section below.

pH values will generally drop as water becomes more pure – this is usually due to removal of alkalinity and substances buffering against the effects of carbon dioxide as it dissolves in the water (carbon dioxide and water mixed makes carbonic acid). It takes very little CO2 to drop the pH in pure, un-buffered water. See Figure 6. 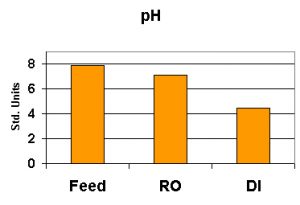 Figure 6. pH of fed water, and discharges from the reverse osmosis and deionization units.

There is some controversy over the negative impacts of silica in aquaria. Relatively small amounts apparently cause no harm, but, at higher concentrations, could help promote diatom growths. I have included silica in the testing results since some pet industry suppliers tout their products’ abilities to remove silica. Silica (as SiO2) was monitored on all water streams. The silica concentration of the deionized water read zero, but is reported as <1 mg/l. See Figure 7. 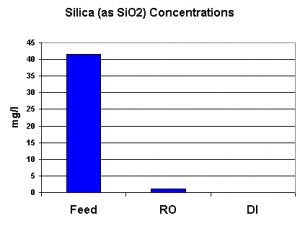 For the record, temperature was monitored on all samples. This is especially importance for conductivity (EC) samples (although the meter used has an automatic temperature compensation feature, EC is reported at a temperature of 25ºC – or 77ºC). Temperature also affects the performance of the reverse osmosis membrane. Temperatures ranged from 24.1ºC to 25.4Cº (~75.4 to ~77.7ºF).

This Captive Purity RO/DI device is rated to produce 75 gallons per day, and came close (~67 gallons/24 hours) after some tweaking. Since production and rejection are competing processes for a given amount of feed water, we should pay close attention to physical variables. Among variables, temperature and water pressure are two important factors to consider when attempting maximizing the efficiency of your RO unit.

A drawback to the reverse osmosis treatment is its water consumption (though it is more efficient in this respect than some water distillation units). The water containing the removed elements is called the ‘reject’ or ‘concentrate’ water, and its volume is always greater than the volume of the ‘pure’ water, or permeate (if the permeate flow suddenly increases, this is an indication that the membrane has failed catastrophically, or that a seal, such as an o-ring, has failed).

In my particular case, the RO/DI unit produced pure water at a rate of ~170 milliliters for every 768 mls of feed water, which means, of course, ~598 milliliters were rejected. Your situation may, and most likely will be, different and the amount of product water will be higher. (To give you an idea of how poor the drinking water quality is here, I can taste the salt – the tap water has a flat briny flavor).

This Captive Purity RO/DI unit generally performs very well, especially when considered the low quality of the feed water. As such, it is worthy of your consideration when making a purchase.

The strengths of this device are:

Next time, we’ll look at what it took to get the most out of this water treatment device (and these recommendations are applicable to any RO unit).

And for hardcore hobbyists:

A colorimeter (Hach Model 890) was used for testing of nitrate, phosphorus (ortho-phosphate), silica, and ammonia. The procedures involved were cadmium reduction, amino acid, silicomolybdate, and salicylate methods, respectively. See here for an evaluation of this colorimeter: http://www.advancedaquarist.com/2005/6/review/

Electronic measurement of pH in ‘pure’ water is not recommended unless the pH sensor is specifically designed for pure and/or ultra-pure water – mine is not. So, in the case of the deionized water, pH was determined with a litmus paper strip. See here for a review of various ‘test strips’: http://www.advancedaquarist.com/2007/4/review/

Comments, suggestions? Reach me at RiddleLabs@aol.com.