On September 1, 2011, Ecotech Marine introduced the Radion XR30w.  The highly anticipated LED light was marketed as a “purpose-built” modular, upgradeable lighting system.  Ecotech Marine’s President Tim Marks remarked at the time: “Our goal was to deliver a product with the ability to evolve and get better over time, not become obsolete.”

Flash forward a year: On September 15, 2012, Ecotech Marine made good on the Radion’s upgrade potential when they announced the Radion XR30w Pro.  The Pro is an evolution of the original XR30w and builds on its  strengths with additional features and increased output.  As such, my review will focus on the improvements the Pro brings to the table when compared to the original, well-known, and highly-regarded Radion. 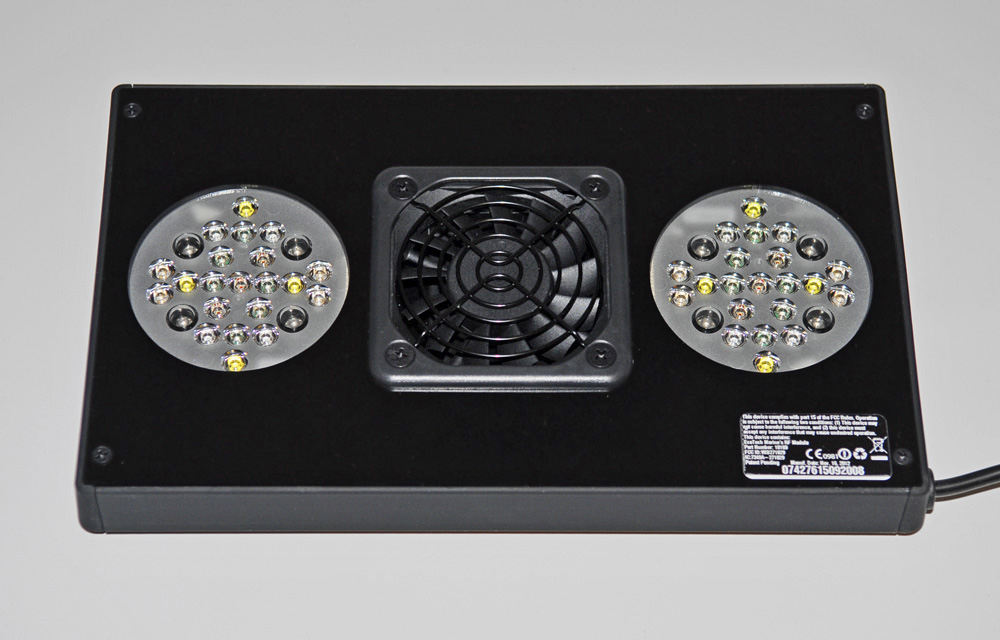 *All wavelengths are the peak emitted wavelength of the LED.

The radion XR30w Pro is an evolutionary product that shares much of the design and components of the original XR30w but with some key changes to enhance its functionality and performance. 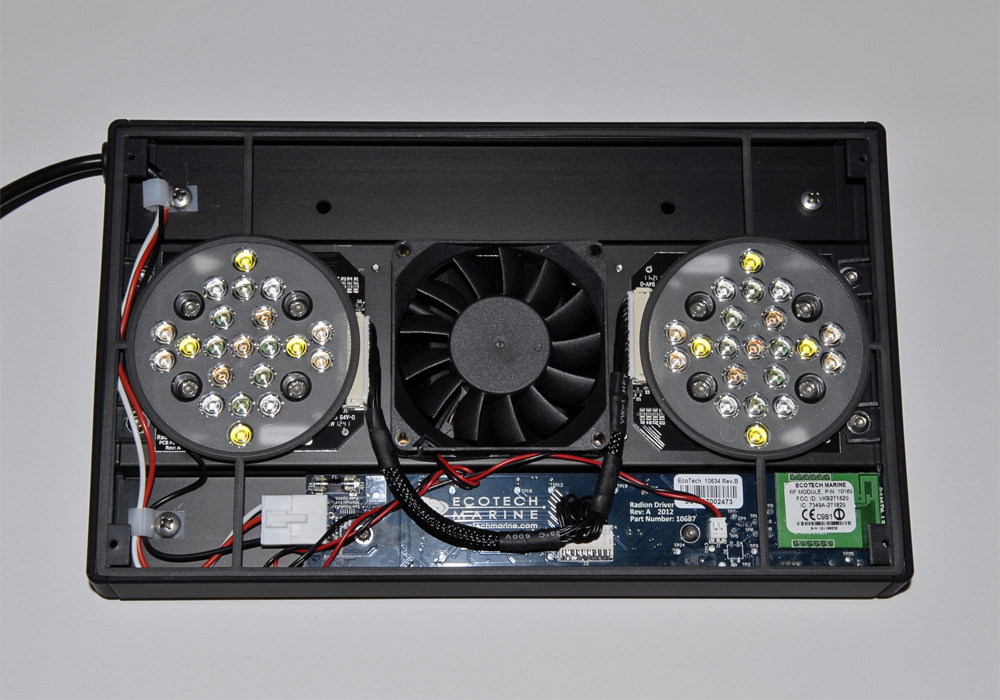 A look inside the XR30w Pro.  Notice the new black LED circuit boards.

The most obvious and significant improvement over the standard XR30w is the new LED array cluster.  The Pro features eight more LEDs over the first generation XR30w and ten more LEDs over the second generation “G2” XR30w. (42, 34, and 32 respectively).  Like the recently announced XR30w G2, the Pro now uses the new 5W Cree XT-E white and royal blue LEDs.  The XT-Es are more efficient than the XP-E and XP-G bulbs they replace (and is consequently why the XR30w G2 requires two less bulbs than the first generation).

The additional LEDs are comprised of two 3W Osram Oslon SSL Yellow diodes (590nm), four 2.5W SemiLEDs “Indigo” diodes (415nm), and four 2.5W SemiLEDs “UV” diodes (405nm).  The 590nm diode – a spectrum bordering between yellow and orange – is centered on each of the LED cluster arrays and was chosen by the Ecotech design team “to provide a more rounded spectrum” according to Tim Marks.

The indigo and “UV” diodes warrant a paragraph of their own because few aquarium LED fixtures include sub-440nm “royal blue” spectra, and those that do often output only token amounts.  The Pro, on the other hand, includes a class-leading 20 watts of sub-440nm light. Ecotech Marine recognized that lower wavelength bulbs are less efficient so the radion would require a substantial number of sub-440nm LEDs to produce meaningful light in this spectral range.  Thus, Ecotech Marine engineers added eight 2.5W LEDs to provide the bottom end of the spectrum.

The four 415nm “indigo” LEDs are a close approximation to the tried-and-true 420nm actinic fluorescent lights reefkeepers have used for decades. The 405nm LEDs are technically not UV (UV is defined as spectra between 10-400nm) but extremely close.  The four 405nm LEDs extend the Pro’s combined spectrum to encompass nearly the entire 400-700nm photosynthetically active radiation (PAR) range 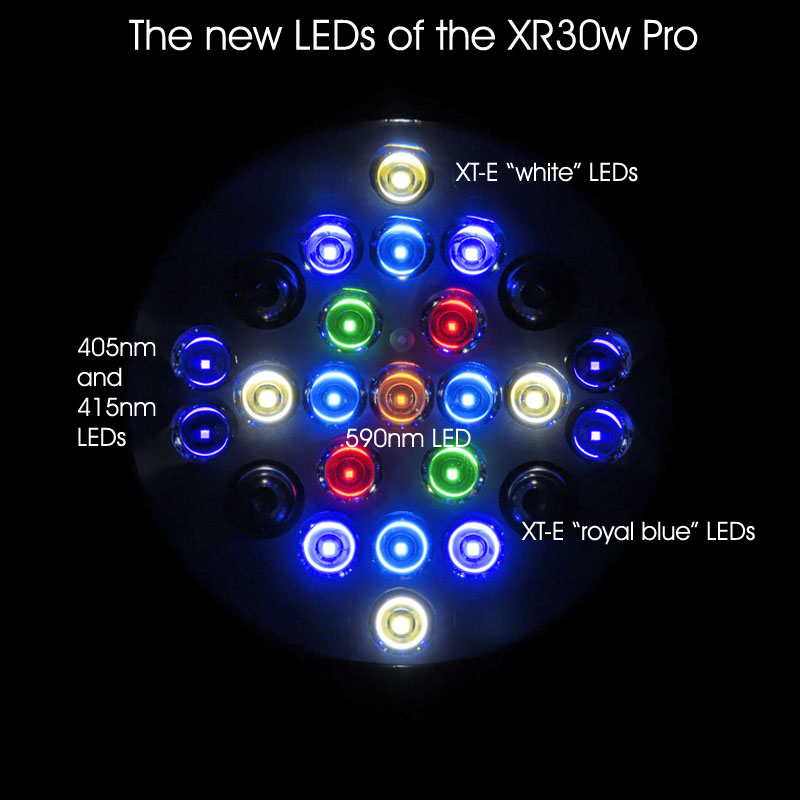 Below are two photos comparing the first generation XR30w (left; upgraded with the TIR lens) and the new Pro model (right; TIR lens are now standard on all Radion models).  (Read our review on the TIR lens) 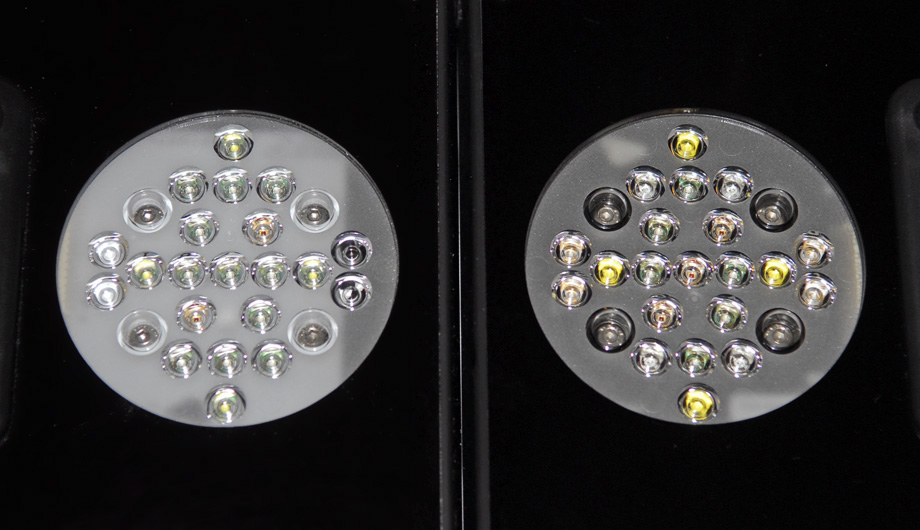 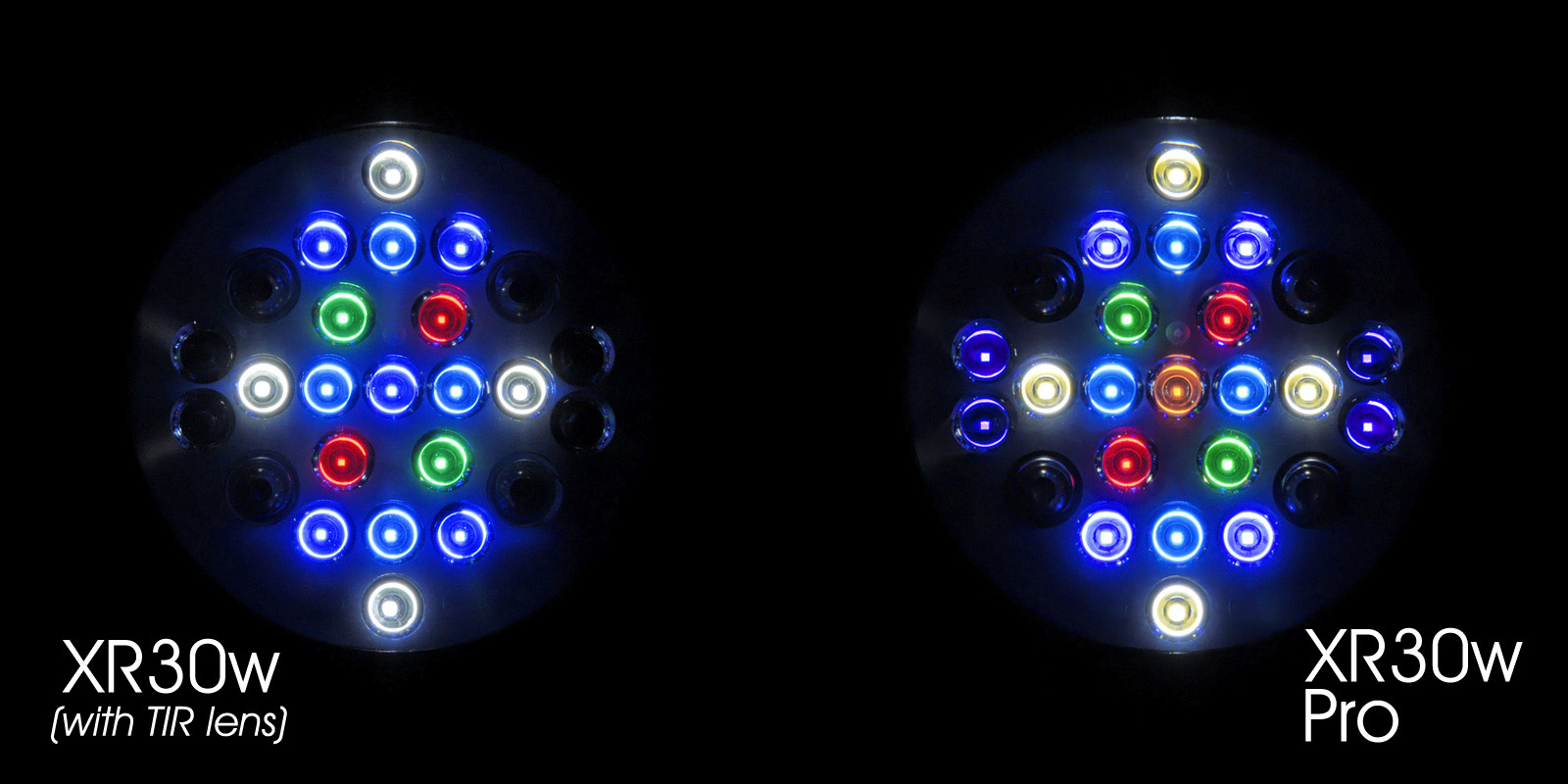 Beyond the new yellow, indigo, and “UV” LEDs, you will also note the new white XT-Es produce a warmer colored white light compared to the previous white XP-Gs.  Both LEDs are marketed by Cree as “”cool white,” yet they look visibly different. You can also easily spot the design difference between the older royal blue XP-Es and the new XT-Es.

The Pro also employs a redesigned “water-resistant” fan, which operates at approximately the same volume as the original radion.   The top acrylic panel (including the touch controls and mounting points) remain exactly the same as the standard XR30w. 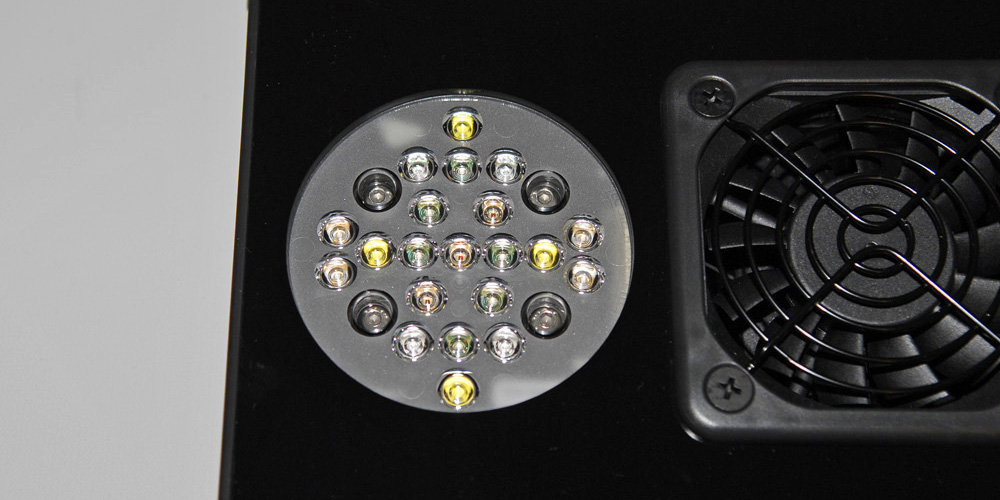 I will not review the Pro’s user interface simply because it is the same interface as the original radion.  Anyone who has used a radion will know how to use the Pro, and there is an abundance of reviews/documentation about the radion user interface posted over the past 15 months. The one notable change to mention is the Pro includes one additional control channel (six channels vs five channels on the standard XR30w G1 and G2) to control the sub-440nm LEDs.

At the time of this writing, Ecotech Marine is still beta testing their new EcoSmart Live web-based interface, which will of course be able to control the radion Pro. Note: The beta platform is now open to the public so all radion Pro owners can use the beta EcoSmart Live if they so choose to.

Dr. Sanjay Joshi plans to test the Ecotech Marine radion XR30w Pro for an upcoming Advanced Aquarist magazine article.  His tests will provide definitive empirical data on spectrum and light distribution.  I will do my best to describe the Pro’s light within the scope of this review.

So the big question is: Just how much more light do the new LEDs add to the Pro?  The answer is: Quite a lot.

Using our Apogee Quantum Meter, I measured the the PPFD 36 inches directly under the center (in between the pair of LED clusters) of each radion fixture.

These results tell us the Pro is significantly brighter than the original radion (even with the TIR lens upgrade):

(Note: These measurements are for comparative purposes only)

Advanced Aquarist does not currently have access to the radion XR30w G2.   However, turning off the sub-440nm channel on the Pro should adequately replicate the G2.  With the “UV” and “indigo” LEDs switched to 0%, the PPFD was reduced to 127 μmol m-2s-1, which means the Pro produces approximately 11% more PAR (requiring 15% more power) versus the G2. 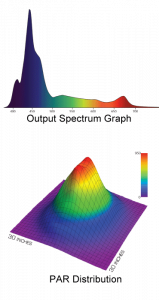 But quantity is only half the story of the Pro.  What about its light quality?

The Pro produces a richer light than the original XR30w.  Ecotech does not assign correlated color temperatures (AKA Kelvin rating) to their LED lights because it’s an inexact math at best.   To the naked eye, the Pro produces a warmer and more natural color rendition than the first generation Radions.  While I would describe the original Radions as a cool blue-grey light at full output, the Pro hedges towards a warmer purple-white.  We can safely assume the difference is accounted for by the new yellow and indigo LEDs as well as the warmer XT-E white LEDs.  And sure enough, when you dial the “UV” channel to 0%, the Pro produces a more cool, grey tone.  The sub-440nm do not contribute much in the way of perceived brightness, but they definitely add a richness to the light that is hard to describe.

It is also worth noting that certain corals fluorescence more under the Pro than the first generation radion (or metal halides for that matter).  This is one unmistakeable benefit where the 400-440nm spectra LEDs can really enhance the appearance of the livestock.  Reefkeepers already know that “true actinic” lighting can bring out biofluorescence that higher spectrum lighting can not, so it’s not surprising that the addition of the Indigo and “UV” LEDs help flesh out corals’ colors.  And the Pro accomplishes this feat without making the entire aquarium look unnaturally monochromatic blue.

All in all, the radion XR30w Pro is a true “full-bodied” high intensity light source for the tropical marine environment.  Furthermore, at full output, the Pro produces a pleasing and balanced color unlike some other >150W multi-color LEDs on the market.

The XR30w Pro consumed 171 watts at full power (virtually spot on to the advertised 170W rating) and 8.9 watts when all the LEDs were manually turned off but with the fan running.  When the LED light was disconnected from its power supply, the power supply still drew 5.2 watts.

Note: The Pro shares the same power supply model as the original and G2 radion.

The Ecotech Marine XR30w Pro does everything I expect of an advanced LED lighting system.  It is a highly flexible and controllable lighting fixture which provides ample amounts of PAR with “natural” color rendition.  The Pro builds on the strengths of the original radion; It does not reinvent the wheel but rather improves upon a lighting fixture that has been vetted by thousands of satisfied radion users.  And this “modular evolution” concept is exactly how the radion platform was conceived.

I will conclude my review on a personal note: I found previous LED lights (including the first generation Radions) lacked the power or color rendition to replace my trusty 250W metal halide and lumenarc III reflector system used over my 176 gallon reef.  The Ecotech Marine XR30w Pro is the first LED unit to impress me enough with both its light quantity and quality that this reviewer has finally decided to make the switch from MH to LED.

FCC Disclosure: This product was provided by the manufacturer for the purpose of review.