This month’s Product Review discusses the relative merits of different methods of water quality testing. One set of methods (test strips) is quick, convenient, and relatively inexpensive, while the other (titration) offers precision well beyond that of many ‘test kits’ normally seem in the aquarium hobby. 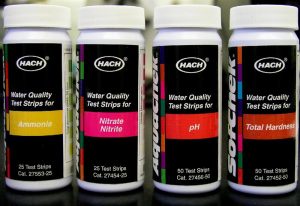 ‘Test Strips’ are a relative newcomer to the water analysis field.

How reliable are the results of ‘test strips’? Is there any advantage in using them? On the other hand, what of the precise results offered by Hach’s Digital Titrator – Is the precision worth the price?

Reefkeeping was once a hobby of those with large amounts of discretionary income. Times have changed – tried-and-true methods and a better understanding of biological requirements of various reef animals have allowed ‘nano-reefs’ to gain popularity. A small fortune is not required to maintain tropical fishes and invertebrates, but we should be constantly refining our techniques to make the reef hobby truly affordable. To this end, do ‘test strips’ fill the gap between sometimes pricey water quality monitoring and none at all?

The first question is obviously one of utility – Do these strips work in saltwater? The answer is ‘yes’ (at least for those tested, which includes pH, nitrite/nitrate and ammonia).

All ‘test strips’ were purchased through normal retail channels, and their performance was evaluated by at least two observers, and the perceived results were then compared to values obtained by ‘laboratory-grade’ equipment, including two calibrated pH meters, and in the case of nutrients, a colorimeter and a spectrometer.

These were the results:

Figure 1. A comparison of seawater pH values measured using a pH meter and a test strip.

The pH strips performed reasonably well under the conditions of the testing. Based on these observations, it is believed that these test strips would be of benefit, especially when rapid results are required (as in troubleshooting). Do not use pH standards (4.0, 7.0, 9.0, etc.) to check!

Actual Ammonia Measurement (as NH3-N): 0.02 mg/l, as measured with a Hach DR 890 colorimeter and prepackaged reagents.

Figure 2. Averaged values of the low range ammonia measurements (in seawater) compared to the concentration determined by a Hach colorimeter.

The ammonia test strips turn blue-green when the maximum concentration is exceeded. They are sometimes difficult to read, and consistently reported ammonia concentrations higher than those tested with either a colorimeter or spectrometer.

These could be of benefit when ‘cycling’ a tank, and, again, could be of use in determining which path to follow when diagnosing aquarium problems.

One small test tube, along with two additional tubes for multiple testing or spares, is included with the test strips.

Figure 3. The ranges for nitrate and nitrite are of interest to those hobbyists ‘cycling’ an aquarium and for quick spot checks.

Value Estimated by Two Observers of the Test Strips: Zero.

Actual Nitrite Measurement (as NO2-N): 0.011 mg/l, as measured with a Hach DR 890 colorimeter and prepackaged reagents.

Comments on the Nitrite Test Strips

Under the conditions of these trials, the strips for testing nitrites performed reasonably well. These would be useful for spot checks and rapid data generation when diagnosing a problem.

Generally, these strips reported values lower than those obtained with the laboratory instruments. This could be due to the presence of chlorides in the saltwater (chlorides exceeding 100 mg/l cause low results). However, nitrate is the least toxic when compared to ammonia or nitrite. The results of these test indicates the test strips have some utility in checking aquarium water.

Total Hardness is generally considered to be the sum of hardness contributed by two elements – calcium and magnesium (although other elements, such as strontium, can contribute to total hardness). Normal concentrations of calcium and magnesium in seawater exceed the upper limit of the test range (natural seawater’s total hardness exceeds 6,000 mg/l as CaCO3). Dilution of the sample is therefore required. Mixing 4 milliliters of sample in 96 ml of distilled water should get the saltwater within the range of the test strip (actual Total Hardness should be ~240 mg/l as CaCO3). Even then, the increments of the test strip do not have the fine-scale resolution to accurately judge Total Hardness should the measurement be higher, or lower.

The Total Hardness Test Strips are not designed for testing hardness normally seen in saltwater aquaria. They might be of benefit for freshwater hobbyists, or perhaps for ‘spot-checking’ RO effluents or tap water.

The test strips (reviewed above) offer only a general sense of concentration, but Hach’s Digital Titrator delivers fine resolution. The Digital Titrator is likely of interest for those looking for a precise method of determining several different water quality parameters. Those tests of most interest to reefkeepers include Total Sequential Hardness (which in turn quantifies Calcium Hardness and Magnesium Hardness), Alkalinity, and Carbon Dioxide (if you’re maintaining a calcium reactor on a reef tank or have a CO2 injection system on a planted freshwater aquarium). Other ‘specialty’ parameters can also be measured, including Chlorides and Acidity. Although Iron and Nitrite concentrations can be determined, the sensitivity of the methodologies does not allow proper resolution, and the lower detectable limits are well above those normally seen in aquaria (Hach’s colorimeters and spectrometers, however, are superb at measuring extremely low concentrations of nitrite, iron and many others. See a Product Review of the Hach 800 series colorimeters at www.advancedaquarist.com/2005/6/review/).

The Digital Titrator (see Figure 4) is a manually operated device, and is very simple to use. A delivery tube is placed in a plastic cartridge (containing an appropriate reagent), which is then attached to the titrator. The operator turns a knob on the titrator, which pushes a plunger within the reagent cartridge, thus delivering small amounts of reagent to the test sample. The titrator is capable of finer resolution than a ‘drop-count’ method. For instance, the drop count method generally dispenses one drop at a time (1 milliliter is usually considered to contain ~20 drops (~0.05 milliliter of reagent); the digital titrator delivers 0.00125 milliliter per digit – 40X more precise than the ‘drop count’ method! 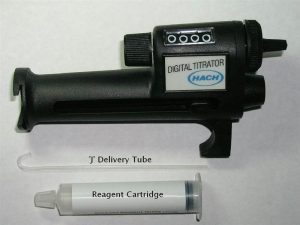 Although any light source can be used while visually judging colorimetric titration endpoints, use of a full spectrum fluorescent lamp is recommended.

Hach offers a couple of options when purchasing a Digital Titrator.

The first option is the ‘no-frills’ offering:

Hach also has a Digital Titrator ‘Kit’, which, in addition to everything in the no-frills package, also includes a 100 ml graduated cylinder, 125 ml and 250 ml Erlenmeyer flasks, a demineralization bottle and clippers. The price is $199.00, and the catalog number is 2270900. Consider pricing these flasks and cylinder separately for potential savings.

As mentioned, there are several tests of interests to aquarists that the Titrator can perform. These include:

Hach’s Digital Titrator will fit the bill for those hobbyists or professional aquarists wanting or requiring the ‘ultimate’ in wet chemistry analytical methodology. The resolution is fine enough to establish diurnal trends. The main detraction is the cost associated with the Digital Titrator and associated reagents. Other lab ware makes using the Titrator much easier (these items include a magnetic stirrer and stir bar, glass flasks or beakers, etc.). These items are available from Hach, or in used condition and are available on EBay, or dealers in used laboratory equipment such as www.LabX.com .

Every effort has been made to present information that is correct at the time of writing. As with all products, specifications, prices and availability can change. For the latest information, visit www.hach.com. Any questions should be directed to me at RiddleLabs@aol.com.