Recently the choice of electronic ballasts available to the reef hobbiest has increased beyond the earlier choices of Icecap, EVC, Reef Fanatic, and Blueline electronic ballasts. This article reviews the new series of electronic ballasts recently introduced by Lumatek, Sunlight Supply – Galaxy Electronic Ballasts, and Proline’s Vertex electronic ballasts. A sample of lamps in the various wattages 400W, 250W and 175W and different color temperatures were selected and run with these ballasts. Spectral data, along with performance in terms of Photosynthetic Photon Flux Density (PPFD), correlated color temperature (CCT), power consumption data was collected using the same equipment and set up used for all the prior tests of lamps. Table 1 shows the various lamps and ballasts tested. These lamps were the exact same lamps tested previously with other ballasts and that data is available on the reef lighting site at http://www.manhattanreefs.com/lighting 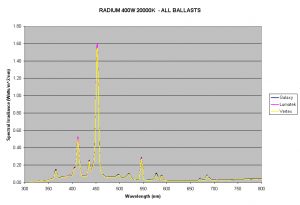 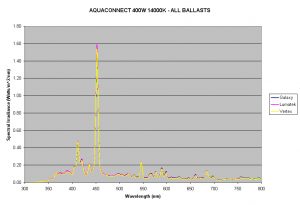 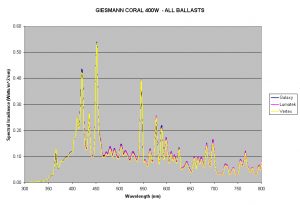 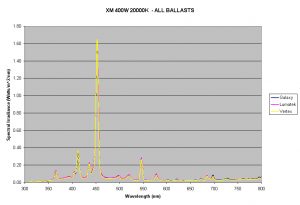 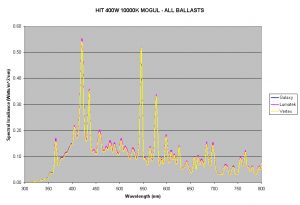 The spectral plots for the different 250 lamps with these ballasts is shown in Figures 6-8. Table 3, shows the performance data. 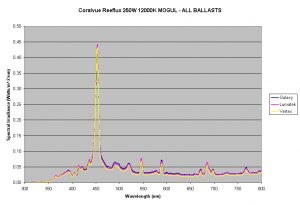 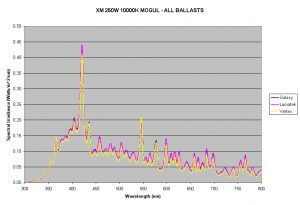 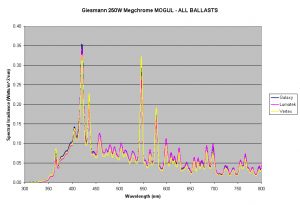 The spectral plots for the different 175W lamps with these ballasts is shown in Figures 9-13, with the performance data shown in table 4. 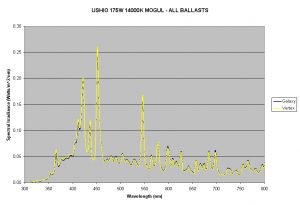 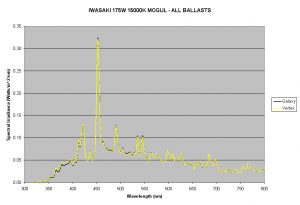 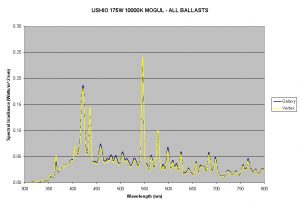 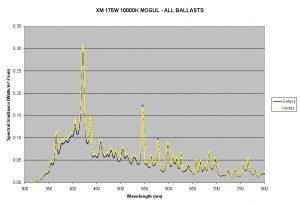 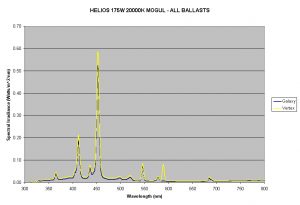 As seen from the spectral plots and performance data the electronic ballasts operate the lamps in very tight band. Among the 400W ballasts and lamps, using the Galaxy ballasts as a baseline, the Lumatek and Galaxy ballasts have output within an average of 2% of each other, with the Vertex ballast having slightly lower output averaging 5% less. This difference should practically be considered insignificant. The Vertex ballast also draws slightly less power, about 4.5% less, which most likely accounts for the slightly lower output. The efficiency computation computes the ratio of PPFD to power input and takes into account the difference in output due to reduced power input. Using this metric, one can see that the ballasts are within 1.1% or less of each other.

Among the 250W ballasts, once again there is very little difference between the Galaxy and Lumatek ballasts. The Vertex ballast draws about 7.7% less power on average and this accounts for the slightly reduced light output. Using the efficiency metric, the ballasts are within 1.8% of each other.

Among the 175W ballasts there is really no difference in performance using either of the Galaxy and Vertex ballasts.

Overall, there is very little difference among these electronic ballasts, and all of them have operating characteristics very close to each other. There is a correlation between the light output and power consumed – the ballasts that consume more power also tend to have slightly higher light output. However, these differences are small enough that the largest difference in output (observed for the Coralvue lamp) can be easily compensated by simply changing the height of the lighting fixture by about 1.5″.

Given that these ballasts have very similar performance, I would have no hesitation using any of these ballasts with the final choice being made by factors other than performance – availability, cost, and customer service.