On September 5-7, 2008, over a thousand marine and reef aquarists flocked to Atlanta Georgia to attend the twentieth Marine Aquarium Conference of North America. This year’s event hosted the most speakers and attendees since the inception of the MACNA conference and the manufacturers and vendors or marine aquarium products were well represented as well. The event yielded a wealth of new products in all aspects of marine and reef aquarium keeping. There is a noticeable trend of more efficiency in marine and reef products and it is no surprise to see more propeller pumps, needle-wheel skimmers and T5 and LED lighting. Long awaited books, new foods and new imports were abundant in booths all over the show floor. 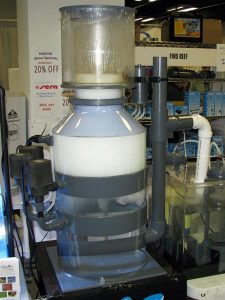 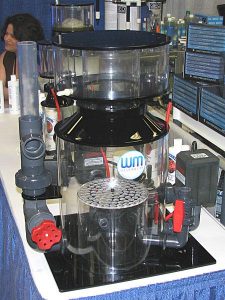 Protein skimmers are always an exciting product for trade shows and this year was no exception. A cursory glance around the show floor revealed that needle wheel skimmers with bubble diffusing plates are all the rage. Although needle-wheel skimmers have been around since at least the mid-nineties, new advances in design and an increasingly eco-minded aquarium hobbyist has made needle wheel skimmers the first choice for many aquarists. We saw many new skimmers from old and new companies, many of which are not known for making skimmers at all. Warner Marine showed off an entire line of needle wheel skimmers which range from the basic in-sump skimmer to the most tricked out, custom modified recirculating skimmers with more valves than a steampunk starship. Finsreef displayed the highly regarded line of needle-wheel skimmers from H&S including a four foot tall behemoth with a price tag to match. The local acrylicsmith MyReefCreation also showed off some spanking new models they had
just finished designing weeks before the show. Whereas most companies use batteries of submersible pumps for their skimmers, the larger models in the MRC line also used external pumps. 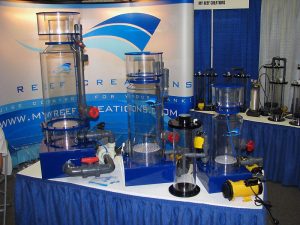 Well established manufacturers like Marineland, Sera and Red Sea also had new protein skimmers to show off. The Marineland model was unique in having the needle-wheel powered pump built in to the base of the skimmer making for a much reduced footprint. The Sera protein skimmer has a dual configuration for use in-sump or hanging over the back. Red Sea’s new skimmer called the C-skim features many innovations including a viewing window of the foam neck, integrated valves and a built-in neck cleaner which works by redirecting the feed water. Another new subcategory protein skimmer is the miniature skimmer for use on increasingly smaller tanks. tunze and Deltec both displayed smaller protein skimmers for use on nano tanks and the relative newcomer Sapphire Aquatics was showing off a skimmer that was skinny enough in design to fit in the back compartment of many of the complete nano-tanks which have been quite popular in the last couple of years. 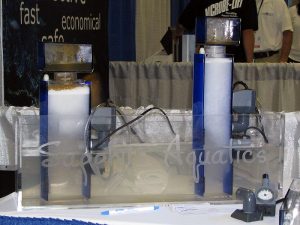 These skinny skimmers from Sapphire Aquatics are designed to fit within the back filter of many nano-reef setups.

Just as with the needle-wheel trend in protein skimmers, the abundance of propeller based water pumps for circulating water appears to be a strong shift away from centrifugal pumps of the past. There were new models from all the major pump manufacturers including Ecotech Marine, Tunze, Rio and Hydor. Ecotech Marine showed off the little brother to their flagship vortech MP40W, the MP20. The MP20 is basically the same as the original vortech with all of the programmable flow modes but with a reduced power supply it spins at lower RPM and it has no wireless communication feature. tunze showed off their new line of propeller pumps called the Stream 2 pumps. This line resembles the ball-shaped and magnet supported nano-streams but with much larger models the tunze Stream 2 pumps will eventually replace the aging and bulky original Stream pumps series. After several years of development, demonstration and marketing, Rio has finally made available the unique Polario pump. With it’s
bidirectional design, the Polario pump could be used to produce water flow throughout an entire aquarium in some really creative ways. 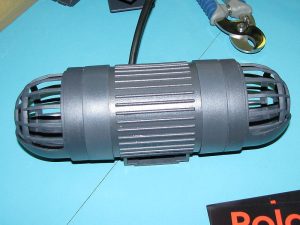 Relative newcomer to the propeller pump scene is the Italian aquarium product company Hydor which has all but taken over the market for smaller and value-centric propeller pumps with their Korallia line. Starting at the bottom and working their way up, Hydor was showing off the new Korallia 5, 6, 7 and 8 which are better known collectively as the Korallia Magnum series. Although these pumps do take up a lot of room within the aquarium, they will probably provide a good performance value of water flow for the price. On the other end of the spectrum Hydor was also demonstrating their super high end wave controller for the electronic series of Korallia pumps. Sporting an LCD display and a seemingly endless list of features and programs, the elite wave controller with an arsenal of pumps will likely be reserved for extremely large aquaria and fairly deep pockets. 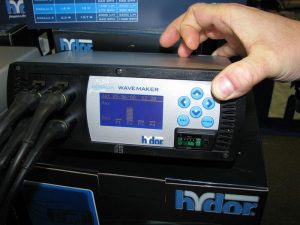 Hydor showed off a fancy electronic wave controller with a real-time LCD display. 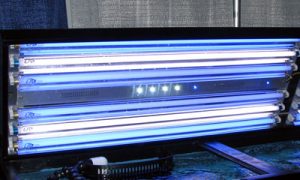 Aquactinics had a prototype T5/LED hybrid which had a noticeable shimmer effect.

As with protein skimmers and water pumps, there were LED products from new and old companies alike. Although the addition of a discrete blue LED moonlight has mostly subsided, this hasn’t stopped manufacturers from including them in their daylight fixture. The most notable use of a similar approach was a prototype fixture being displayed by Aquactinics. Aquactinics actually combined LED and T5 lights to produce a fixture with a good color spectrum and good light spread but with the added advantage of a real, noticeable shimmer effect. Although this idea sounds gimmicky on paper, I must confess that I thought the effect was very pleasing and more noticeable throughout the entire aquarium than one might think. Small aquarium specialists, Nano Tuners demonstrated a small 5 bulb LED fixture which appeared to have more than enough punch to light a nano-reef. One of the more interesting LED products being demoed at MACNA was a new mogul based bulb-fixture from Coral Dynamics. The ALED is
an LED lamp with built-in drivers and 30 1-Watt LED lights embedded in a glass coating to form a nice and reasonably powerful, horizontally mounted spotlight. 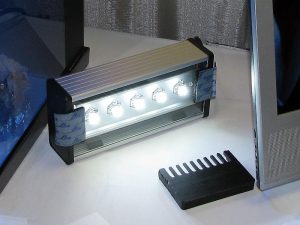 By and large the real winner in the LED arena was PFO’s latest iteration of their Solaris fixture, the American made I5 series. It was about three years ago that a full LED fixture was first introduced to us by PFO. The lighting company demonstrated the new performance level of the Solaris by using identical tanks, each with a PAR light meter, a Kill-A-Watt power meter and with separate lights. The Solaris LED light showed similar light levels as a 400 Watt Metal Halide lamp of similar spectrum but at 225 Watts, the Solaris is finally ready for prime time reefkeeping. 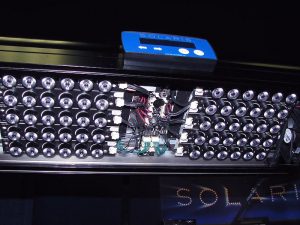 The Atlanta MACNA held many nice surprises besides core reefing equipment. As a nod to an increasingly reef culture the event even had a T-shirt company dedicated to living with marine aquariums. Reefer DNA’s T-shirt slogans included “Got Skimmate?”, “I’m a Reefer” and “Mantis, Wanted Dead or Alive”. There were a handful of new books for sale which have only recently become widely available. One of the more hotly anticipated titles was Matthew Wittenrich’s new “The Complete Illustrated Breeder’s Guide to Marine Aquarium Fishes”. A quick review of the Breeder’s Guide revealed a wealth of valuable and practical breeding tips from getting breeders to selling their offspring. The most recent addition to Scott Michael’s seminal “Reef Fishes” series was the “Clownfishes and Damselfishes” which pays tribute to this popular group of reef fishes. One of the “books” which was not for sale was the new Fishidea, a free downloadable guide to over 500 species of reef fish which is designed for
use on desktop computers and mobile devices alike. French company Prodibio had a big-ole booth right in the center of the show floor. Besides their bacterial based nutrient processing and equalizing system, Prodibio displayed new gel-based calcium and alkalinity additives which come pre-measured in individual vials. 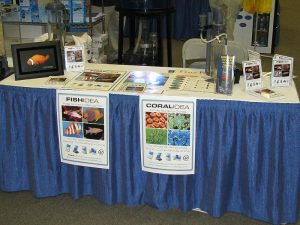 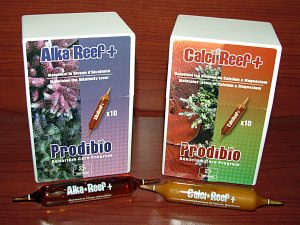 These Prodibio vials include pre-measured calcium or alkalinity supplements. 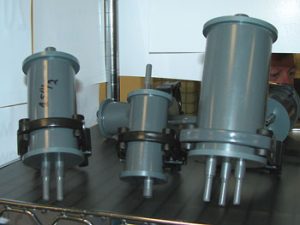 The German enthusiasm for high end aquarium engineering was as strong this year as it has ever been. Finsreef showed off another new product from H&S, a segmented cylindrical display aquarium with a complete filter system built in to the base. This high end aquarium system did not come cheap but with the right live-stocking it could make for a very unique display. On the other end of the affordability spectrum, Finsreef has imported attractive and well made air intake mufflers also from H&S. These little gray barrels are not much to look at but they sure do a good job of silencing the increasingly abundant needle-wheel skimmers and their loud, air-slurping intake lines. Although calcium reactor designs have not changed much over the last couple of years, Aquarium Specialty was showing off a German model by Aquacare which looked like it was ready to produce cold fusion. This beastly calcium reactor included many different chambers for optimizing CO2 use and minimizing the
return of this acidic gas back to the aquarium. Also from Aquatic Specialty and the final bank-busting, napoleon-complex product from Germany is Royal-Exclusiv’s new Red Dragon 2 pump. The behemoth centrifugal pump is built with an efficiency defining, brushless DC motor, it is controlled by a brick of electronics and the largest model tops out at 15,000 gallons per hour. Seriously though, who needs this much power from a single pump? 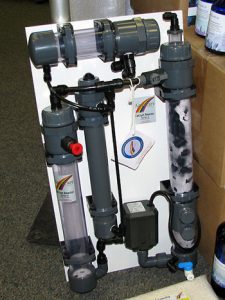 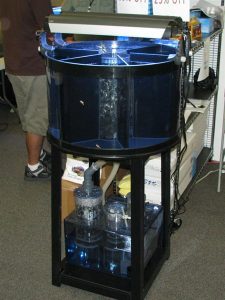 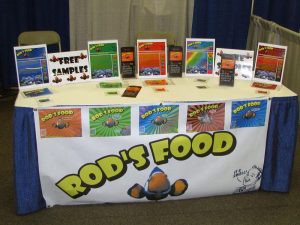 The most exciting new aquarium feeds were American made. Rod’s Food showed off and gave away free samples of their new recipes for predators, herbivores and corals which have become available in select retail stores in the last few months. I don’t know if you’ve tried Rod’s Food but it makes figuring out what to feed a community of reef fish trivial since the Original recipe basically includes every single seafood product besides whale. Reef nutrition had an eye catching display of their specialty feeds. The three “live cylinders” in Reef Nutrition’s booth showed off the widely popular Tigger-Pods, the staple Macro-Feast and their new free-floating macroalgae feed called Fuzzy-Phytes. This new live-algae feed is a red macroalgae which includes colorful pigments and it has been found to be eaten by an assortment of picky eaters. The other new Reef Nutrition product was their fine particulate invertebrate feed called Oyster-Feast. With a particle size of 1-200 microns, perhaps it is
a matter of time before someone figures out a way to make it a suitable diet for picky soft corals, sea squirts and sponges and it will likely be appreciated by SPS corals as well. 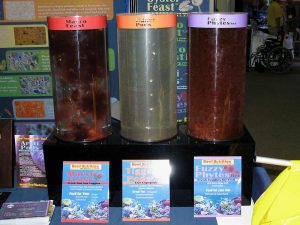 Between the European imports, American innovation and advancements in nearly every kind of product one can imagine, this year’s MACNA offered attendees a wealth of new marine and reef aquarium products to gawk at and enjoy. There were many more products than there is time to cover in a single article which is exactly why enthusiasts of the marine and reef aquarium scene should make plans to attend MACNA next year. The Atlanta Reef Club crew did an admirable job this year and we have high expectations for the very capable folks running the New Jersey Reef Club who will be hosting MACNA 21 in Atlantic City. See you there.