Keep a 45-gallon temperate
seagrass lagoon biotope seahorse tank between 65 and
68°Fahrenheit. The tank won’t have corals, or even
photosynthetic gorgonians or anemones, but because I’ll be
keeping abundant macroalgae and seagrass in the display tank, it
is necessary to provide strong lighting. Naturally, the stronger
the lighting (in this case, 350 watts of metal halide and 130
watts of PC), the harder it will be to maintain the target
temperature range. Why not just keep tropical seahorses? Because
of that evil publication,
Coral
Magazine. Remember the
first
issue with those adorable seahorses on the front cover?
Yeah.Hippocampus breviceps. I decided then that I needed
them, and have been working towards creating the best home I can
for them ever since. So, it’s all Coral Magazine’s fault.
Breviceps can handle a range of temperatures much lower
and even do okay in the low seventies. I would like to observe how changes in temperature and photoperiod effect their mating and breeding behavior, so being able to maintain specific temperature ranges is important. I need temps cool and carefully controlled, too. I figure accuracy of one or two degrees should be fine.

Oh, and the tank is situated in my living room, where we watch
TV. So excessive heat and noise is not an option. And I’m not
wealthy. Acquiring a chiller for most people is costly enough,
but with energy prices as high as they are, the expense of
running a chiller is also a big consideration. Choosing a chiller
based on initial cost is not always the best way to save money in
the long run, nor is getting the smallest possible model for your
needs. In fact, choosing a chiller that is designed for
efficiency, and choosing the best size/rating for your needs is
key to saving money.

And I’m not especially handy, technology-wise. Okay, I’m
pretty hopeless. So, I need something easy to use and
maintain.

Efficiency, accuracy, quiet operation, ease of use. That’s
what I need in a chiller. It’s a lot to ask. 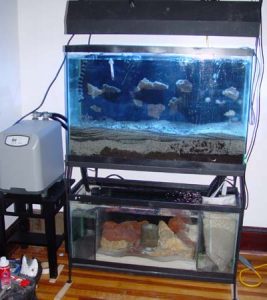 This system was designed as a planted marine seagrass biotope,
with live sand and rock, macroalgae, and vascular marine plants
as the main filtration. After the tank is well established, I can
add a canister filter or CPR hang-on skimmer in the sump to
maintain water quality. Since this is a seahorse species-specific
system, I need to keep the flow fairly low (relative to reef
tanks) and the zooplankton population high. Although the horses
will be tank bred and eating frozen mysis, I believe you can’t
have enough variety in a seahorse’s diet, and pods certainly will
add diversity to their diet. Luckily, macros and grasses in the
display tank and a sump/refugium seeded with pods should provide
a steady supply of zooplankton to supplement the horse’s enriched
mysis meals. 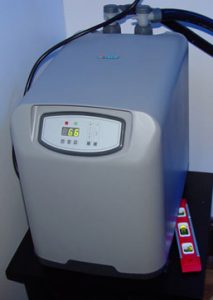 I spoke to Mike Noce of Fritz Industries, the distributer of
Teco products in the United States, and we decided that the best
chiller for this system was the T20 because of the fact that the
animals need temperate water conditions year round. For a
tropical system, I could have used the T15 or even the T10, but
as you’ll see, the one-third horsepower unit is really the best
choice for efficiency and reliability, long-term, for my cool
water system. Fritz Industries provided me with the unit, and,
since the manual hadn’t been printed yet, I downloaded a PDF from
their Web site, www.TecoUS.com. That manual can be
downloaded by right clicking the following link and choosing
“Save link as” or “Download linked file”:
Teco
SeaChill Manual. The small spec sheet that came with the
unit had some entertaining Engrish, but the manual itself was
easy to understand and had clear diagrams and images.

Teco SeaChill chillers are available with either an integrated
heater or UV sterilizer option. I chose the UV sterilizer. The
heater, were I to have chosen that option, would be controlled by
the automatic thermostat.

You may notice from the specs above that I chose a more
powerful chiller than my system needs. After all, once you take
into account that I have a 7″ sand bed and a sump full of rock,
my “75-gallon” system is only circulating about 45 gallons of
water. For a 15° pull-down, the SeaChill T20 is rated for
more than 300 gallons. However, the more powerful the chiller
unit, the less it will actually be operating. In the table below,
you’ll see that after the initial cool-down of the tank water
from 78° to 67°, the unit only cycles on for fifteen
minutes every two hours. A less powerful unit would be running
longer and more often, thus creating more noise, using more
energy and causing more wear on the unit.

Note: These temperatures were taken while the tank lights were
on, and the optional integrated UV sterilizer was running.

I started out with a water temperature of 79°. Setting the
desired temperature was really simple. Once you’ve turned on the
power, press the “set” button once, then use the arrow buttons to
raise or lower the temperature on the display. I originally set
the chiller to 66°, then pressed “set” again, and it was good
to go. Within two hours, the water temperature dropped twelve
degrees. You’ll also noticed the ambient temperature also rose
during this time. How much of this was due to the chiller
throwing off heat or to the time of day, it’s hard to say. But it
really wasn’t as much as I expected. The LED display never
reached 66°, as you can see from the chart above. The
thermometer I used in the tank was hard to read, but seemed to
measure approximated the same as the T20 display was showing.
I’ll have to get a digital thermometer and check the numbers
again. I also noticed that the water temperature rose to 68°
and remained there for some time before the chiller cycled back
on. Since the accuracy was within the range I was comfortable
with, I don’t see that as a problem. The temperature never went
higher than two degrees over what I set the chiller to
maintain.

Teco U.S. provides specs for this chiller that indicate
operating noise levels of 41 decibels (dB) in normal mode and 39
dB in “Silent mode,” a handy feature for when we’re watching a
movie and don’t want background noise interfering. I used a sound
meter to take the following measurements, beginning with the
normal operating noise of the system with only the lights, air
pump and Magdrive 9.5 running. Also, there is a central air
conditioning vent in the room. This gave me a baseline ambient
noise reading of 47.9 dB right next to the tank, and 46.7 dB
about 7 feet away, on the couch. Next, I switched on the T20
chiller and took readings again. Close to the tank, the noise
level only increased by 12.8 dB, well under what I expected. Over
by the couch, the increase was only 6.6 dB. In Silent mode, as
you an see, the increase was only 8.9 dB from the ambient noise
level near the tank and 4.6 decibels from the couch! This chiller
is extremely quiet, especially considering how powerful it
is. 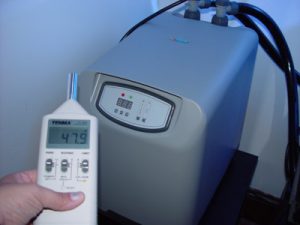 Ambient noise (chiller off) less than one
foot from the chiller was 47.9 decibels. 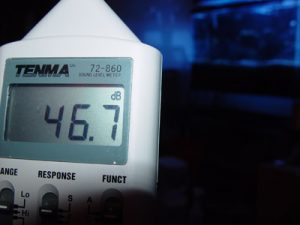 Ambient noise (chiller off) about 7 feet
from the chiller was 47.9 decibels. 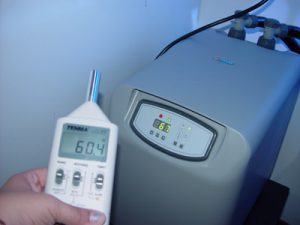 In normal mode, less than one foot from
chiller. 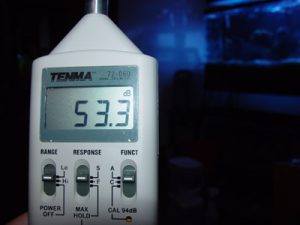 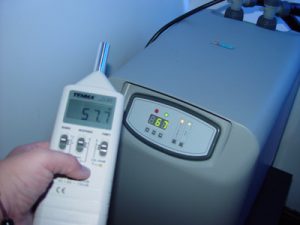 Silent mode, less than a foot from the
chiller. 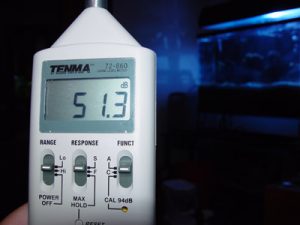 And back at the couch, chiller in silent
mode.

I managed to hook up the input and output hoses without a
problem. I figured out how to set the controls and use the UV
sterilizer, and set the chiller to “Silent Mode.” I even found
the filter all by myself! I didn’t need any tools or adhesives or
adapters. Installing this chiller was the easiest and ONLY
mistake-free aspect of setting up this system. The most important
thing that I did have to consult the manual for is that you have
to leave enough ventilation space behind the unit so it will
operate efficiently. Luckily, I had figured on giving it a place
of pride in my living room, and hadn’t expected to stow it in a
small cabinet, so providing the 8″ of clearance space was no
problem. 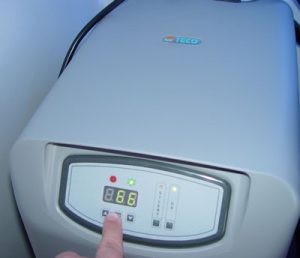 Even I could handle setting the
temperature.

The manual provides very clear instructions and photographs
for cleaning the air filter and changing the UV bulb (every 12
months). There doesn’t seem to be a need to periodically “back
wash” the coils, which is great, because I have no idea what that
means. It’s just something that someone asked me to check the
manual for, so there you go.

I’m thrilled. Tickled. Delighted. Anyone who knows me had been
hearing about this breviceps system for at least two
years. Selecting and acquiring the chiller was the final step I
had to make in my preparations. I’m certain I made the perfect
choice a chiller. And with a 2-year manufacturer’s warranty, I
feel even more confident about choosing the Teco SeaChill.