Which bulb produces more intense light: A double ended Aqualine 150 watt bulb or a single ended Blueline 400 watt bulb? If you’ve followed the on-line discussions of the past few months, you might guess the double ended 150 watt bulb. While this is wrong, the assertion joins a growing list of reefkeeping urban legends. While urban legends such as this are often hard to trace back to their source, in this case it is not difficult. Sanjay Joshi writing in the 2002 Marine Fish and Reef Annual at first glance appeared to suggest this very thing. According to Mr. Joshi the 400 watt Blueline produces 71.6 μE/sec/m2 while the AB 150 watt bulb produces up to 246 μE/sec/m2. Reading the text carefully makes it clear that the 400 watt bulb was measured without reflector while the AB bulb was measured with an integrated reflector. However, anyone just scanning the tables might not understand this. The confusion over this unfortunate
juxtaposition of data on bare bulbs versus a bulb in an enclosure with reflector has gradually been sorted out, but it points out the need to carefully read how data are collected. 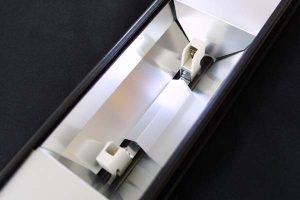 In order to determine the actual direct light output of the AB 150 watt bulb, I disassembled an Aqualine 150 watt fixture replacing the integrated reflector with a flat black reflector (figure 2). This meant that the measured intensity would be comparable to how we have been measuring single ended bulbs. Mr. Joshi has been reporting intensities at 18 inches and my measurements have been at 24 inches, so I measured intensity at both distances. All measurements were taken with a LiCor Datalogger and calibrated LiCor PAR sensor. The sensor was placed directly below the bulb with the distance measured from the inner envelope to the edge of the sensor.

As table one indicates, the reflector significantly increases intensity directly below the bulb. Consider that Mr. Joshi reported an intensity of 135 μE/sec/m2 for the 400 watt AB bulb at 18 inches and I measured the Iwasaki 400 watt bulb at 165.1 μE/sec/m2 at 24 inches. Just glancing at the 150 watt results, one might conclude that we could achieve the same intensity of a 400 watt system with a double ended 150 watt system. In one sense it might be true. A hobbyist using a light canopy without specular reflectors (for example just painting the inside of the canopy) might have no more light in the tank than with a 150 watt fixture with integrated reflectors. Hopefully, however, most hobbyists have learned about the value of a specular reflector, and in that case, the intensity advantage is clearly with 400 watt bulbs. For more about specular reflectors, see my review of the Spiderlight reflector http://www.animalnetwork.com/fish2/aqfm/1999/feb/product/default.asp

Now having data on the intensity of an AB double ended 150 watt bulb enables us to compare it to the intensity of the AB single ended 175 watt bulb. In the May/June 1997 issue of Aquarium Frontiers I measured a wide range of 175, 250, and 400 watt bulbs including the AB 175 watt bulb. Table 2 compares the single ended 10,000 Kelvin AB 175 watt bulb using a tar ballast to the 10,000 Kelvin double ended AB 150 watt bulb using the AB fixture and tar ballast. The second column is a measure of the efficiency of each bulb. It is the measured intensity divided by the power consumption of the bulb. 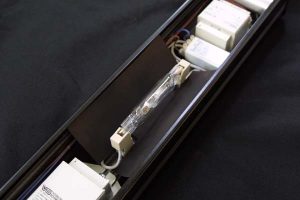 The 175 watt bulb produces slightly more light, but the increase in intensity can be attributed to the higher wattage of the bulb. It turns out that the efficiency of the two bulbs is virtually identical indicating that double ended bulbs are no more efficient than single ended bulbs with comparable ballasts.