It’s been many years since my
last product review of a protein skimmer. I’ve been reluctant
to revisit skimmers because that last review, written for the
now-defunct print publication, Aquarium Frontiers,
caused a lot of controversy. Aquarists are very passionate and
opinionated about their skimmers. Perhaps it’s just a
mechanism to justify the large sums of money we spend on these
devices. Regardless of the reason, there is a loyalty towards
types and brands of skimmers that doesn’t exist with other
reef equipment. I’ve also avoided writing about skimmers
because they’re difficult to compare and “test.”
The best I can offer are my subjective opinions; although
they’re based upon having used or seen just about every
skimmer offered for sale to marine aquarists. 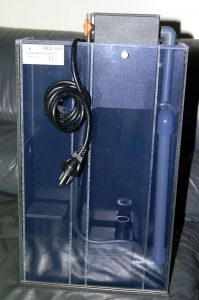 Similar to many reef aquarists, I keep a reef aquarium without
a sump. It’s a 42 gallon hex tank that contains a mix of SPS
corals, soft corals, and anemones. For years I’ve struggled
to find a quality hang-on-the back (HOB) skimmer for this
aquarium. There are plenty of choices in HOB skimmers but only a
few that I consider “high-quality.” There’s been a
lot of buzz lately about the Deltec HOB skimmer so I thought
I’d give it a try. 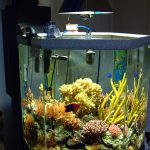 The Deltec MCE600 skimmer is similar in design to the
company’s other models. It’s an aspirating skimmer that
mixes air with water through the intake side of a submersible
pump. The key to its operation is the “needle-wheel”
impeller that “chops” the air into the finest of
bubbles. It’s regarded as the most efficient design in
skimmers for mixing air with and water.

The Deltec MCE600 skimmer sits on the lip of the aquarium and
is held in place with a plastic clamp. It requires only 3 inches
of clearance behind the aquarium. The only piece that intrudes
into the aquarium is a clear intake pipe. This was a big
consideration for me because my previous HOB skimmers were all
designed to operate with the intake pump hanging inside the
aquarium. This took up a lot of valuable space inside an already
small aquarium and made it more difficult to maintain. In
addition, it just looked plain ugly. Although the Deltec skimmer
was designed to hang on the back of an aquarium, it can also hang
on the outside of a sump or sit inside a sump. One of the
advantages of a HOB skimmer, compared to an in-tank or in-sump
skimmer, is that its operation is unaffected by the level of
water in the aquarium or sump.

Installing the Deltec MCE600 skimmer is as close to plug
‘n play as it gets. There is essentially nothing to assemble
other than the intake pipe. After filling the skimmer box with
tank water, which is necessary to prime the pump, you simply plug
it in. That’s it. There is an initial setting of the cup
height and air-intake valve that will have to be re-adjusted
after 24 hours of operation. 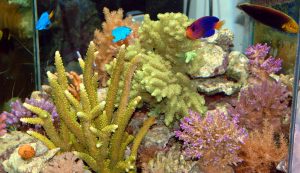 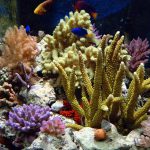 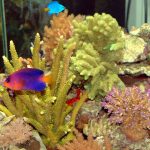 If you haven’t used a HOB skimmer before, you might get
nervous about the large amount of air bubbles returning to the
aquarium when you first start the Deltec MCE600. This is normal
and will dissipate after a few days. It’s due in large part
to the plasticizers used on the acrylic and PVC parts. In fact,
after a few days of operation, the water return from my Deltec
skimmer was essentially bubble-free. The skimmer comes with a
diffusing plate on the output to further reduce the incidence of
stray air bubbles but I found this wasn’t even necessary;
however the diffuser plate does reduce splashing and should be
kept in place. For this same reason, it may also take a few days
to a week for the skimmer to “kick in” or begin
producing a dense head of foam.

The Deltec MCE600 in is well-made of acrylic and PVC parts.
Most of the box and plastic components are black or opaque to
reduce the incidence of algae growth inside the skimmer. The back
side is clear, which allows you to see inside the skimmer box and
observe the pump in operation.

The skimmer completely disassembles through a series of
sliding covers and partitions and it is very easy to clean and
adjust. The height of the collection cup is set with a nylon
screw. There is a pipe at the top of the collection cup that
directs water back into the skimmer in the event that the skimmer
overflows, thus making the skimmer “flood-proof.” There
is no built-in option to collect the skimmer effluent in an
external container. This is done purposely and serves to
eliminate the possibility of water overflowing onto the floor. If
you must collect the effluent in an external container, this can
be done with a simple modification: cut the overflow pipe, attach
a length of vinyl tubing to the cut end, and direct it to a
container or drain.

Another feature that I really like about the Deltec HOB
skimmer is the built-in media chamber. It enables you to add a
bag of carbon, phosphate-removing compound, or biological media
in the path of the outflow. This is an important attribute when
you don’t have a sump. I also hide a small titanium heater
and temperature probe inside the skimmer box!

Although I don’t use ozone on my reef aquariums, the
Deltec skimmer can accommodate ozone. Simply attach a length of
ozone-resistant airline tubing (silicone or norprene) to the
intake side of the venturi valve. Attach the other end to the
output of the ozone generator. Ozone-laden air will be
automatically drawn into the skimmer. This setup doesn’t
require an additional air pump. The manufacturer recommends using
a maximum of 25 mg/hr of ozone. Although the skimmer can
withstand higher amounts of ozone, amounts in excess of 25 mg/hr
are not recommended for the typical aquariums that employ this
skimmer. 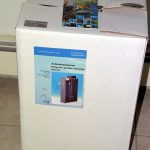 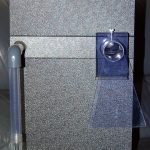 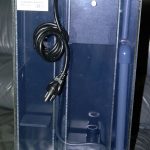 Just like every skimmer, the Deltec HOB skimmer requires
regular maintenance in order to keep it working effectively and
efficiently. The manufacturer recommends the following routine
maintenance: 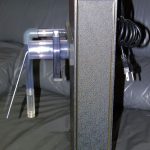 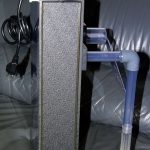 I’ve only been using the Deltec HOB skimmer for a few
months, but I can confidently recommend it to anyone looking for
a quality HOB skimmer. I’m impressed with the needle-wheel
technology and can say that it mixes more air with water than any
skimmer design that I’ve seen to date. It’s quiet in
operation and extremely effective. The collection cup is filled
every 3 days with the most-foul smelling effluent that I’ve
every come across. Some of the other features that differentiate
the Deltec HOB skimmer from other HOB skimmers, and are important
to me, include:

Deltec claims that the MCE600 skimmer is suitable for use on
aquariums from 100 to 186 gallons, depending upon the stocking
levels. I believe this is a fair recommendation, but I tend to be
conservative when it comes to skimmers. I would recommend it for
aquariums up to 90 gallons, because, as we all know, every
aquarist eventually overstocks their aquarium.

For more information, including local dealers and pricing, I
suggest visiting the Deltec USA web site at:
http://www.deltecusa.us/
.