The history of technological advancement in reef keeping seems marked by several years of innovation followed by several more years of relative quiet. For years hobbyists had few choices in protein skimming. One could use an air- stone driven skimmer or a venturi skimmer. Then in the 1990s ETS introduced downdraft skimming to the hobby. The downdraft skimmer generated renewed interest in protein skimming innovation and before long we had a wide range of options including the downdraft, the MTC High Speed Aerator (HSA), and the Euroreef skimmers, in additional to refined versions of the venturi skimmer. 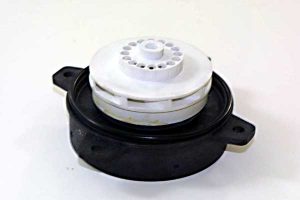 The hobby seems to have entered another quiet time in this technological punctuated equilibrium. There hasn’t been a successful introduction of a new protein skimmer to the hobby in a number of years. That may be changing. The German Klaes series of “aspirating-venturi” skimmers is now being imported into North America by Aquatic Dimensions http://www.klaeskimmer.com/. Many popular German products have been imported into North America for some time. tunze and Knop to name just two have become household names in North American reef keeping circles. Klaes skimmers have been around for well over a decade, and yet we are just beginning to see them on this side of The Pond. At first glance one might be tempted to dismiss the Klaes as nothing new. Most North American hobbyists have probably heard of the basic principles behind the Klaes skimmer. It shares elements with the common venturi and air shredding skimmers, and yet puts them together in a
unique design that may reignite the skimmer debates that characterized reef keeping in the 1990s. 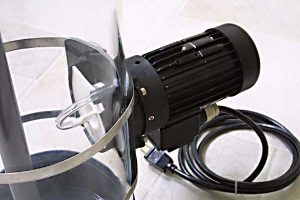 Figure 2: A small motor draws air into the skimmer 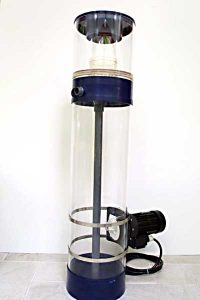 The Klaes skimmer is typical of German design, which is to say that it is very well built. The skimmer parts are heavy gauge acrylic and plastic throughout. The skimmers have a high diameter to height ratio, which is important. (For a more complete discussion of protein skimmer principles, see my article on skimming in the 1999 issue of Marine Fish and Reef Annual.) The three foot skimmer that I evaluated has an 8 inch diameter reaction chamber. Unlike other skimmers, the collection cup is the same diameter as the reaction chamber. This allows the Klaes to use a 3 inch collection neck and 3/4 gallon collection cup volume. The collection cup itself is made of three parts for easy disassembly and cleaning. The recirculating motor draws only 45 watts and is mounted directly to the side of the skimmer for a compact design (figure 3).

One of the most important design elements of foam fractionation is bubble contact time. Proteins, heavy metals, and other materials that a protein skimmer removes are removed by coming in contact with an air bubble that carries it away to the collection cup. One wants as many bubbles in the contact chamber as possible and a bubble to remain in the chamber as long as possible. (This is a simplification of a complex process. The references included in the skimmer article mentioned above should be consulted for a more complete discussion of the process.) The Klaes uses a counter-current design with water flowing down the reaction chamber while bubbles rise through it maximizing reaction time. More importantly, the pump used to mix air with the water is only a recirculation pump. A user supplied external pump feeds the skimmer. Therefore it is the external pump and not the recirculation pump that determines the flow through the skimmer. This is one of the most beneficial aspects of the
Klaes design. The air to water ratio can be maximized with this design. Most of the new skimmer designs generate a fixed air/water mix, generally on the low side of ideal. Since the flow through the Klaes can be slowed without reducing the air flow, one can generate a high ratio of air to water flow. 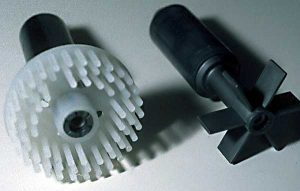 Another important aspect of skimmer design is the size of the bubbles generated. One wants fine slowly rising bubbles to maximize surface area and contact time. Air driven skimmers using wood air-stones excel in this regard generating the smaller bubbles than any other design. Both the MTC Power-Pro, a venturi skimmer, and the Euroreef skimmers produce bubbles nearly rivaling an air-driven skimmer. The bubbles generated by the Klaes are similar in size to the Power-Pro.

Today North American hobbyists have a wide range of choices when considering a new protein skimmer. Given its quality of workmanship, power efficiency, and effectiveness of the Klaes design, it is time to add Klaes to this growing list. 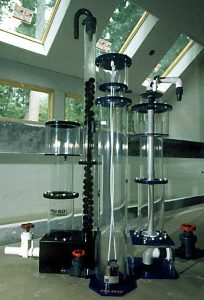 Figure 5: Three skimmer designs. From left to right, the downdraft, the air- driven counter-current, and HSA.