There are few things in this hobby which are static or even thoroughly understood. The effects of regular water changes are no exception. I will illustrate for you exactly why I believe that water changes are an integral part of the regular maintenance on reef tanks and how much should be changed at once. 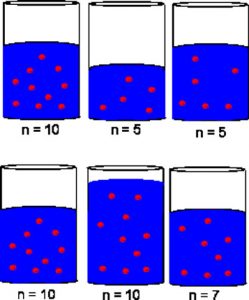 Water changes are a relatively low cost and easily attainable portion of a regular maintenance regime. They help by removing unwanted waste products and possible contaminants. They are also beneficial in the replacement of those nutrients and elements, which are normally consumed in the tank and not readily replaced. I have even seen tanks that use water changes as a sole source of replenishment (no additional supplementation). While that is not feasible for most of us due to time, cost, and headache, it would be ideal.

One key item to be aware of is the dilution effect of water changes. In order for a water change to be useful, you must remove a portion of the water entirely and then replace that portion. If you add new water to the system, then remove the same volume, you are actually reducing the value of your new water significantly due to dilution. In effect, you are removing some of the new water you have just added, although in reality you dilute down the compounds you are trying to remove and then removing a portion of that diluted water (figure 1).

There are different methods for replacement of aquarium water with varying degrees of ease. Most people drain their sumps and replace the old tank water with new water using a siphon or scoop and a few buckets. Some have elaborate systems of valves and plumbing as an integral part of their system that allow simultaneous removal and replenishment from two differing areas of the setup.

I perform mostly regular bi-weekly water changes with a 30g mixing trash can, a Mag 7 pump, and some tubing. I run new water into the sump while simultaneously diverting the main return line into a second 30g waste container without stopping the return pump. This allows for maximal ease and due to the large volume of my sump, little to no mixing of new and old water prior to disposal.

Automation, in general, allows for an easier more hassle free water exchange, which as we all know makes it an easier and more readily completed chore.

How Much Should I Change?

The portion changed, or percent of system volume replaced, is a critical issue when talking about removal of possible toxicants and toxins, and replacement of valuable elements and nutrients.

Figure 2 – 10, 20, 30, and 50% water changes and their dilutory effects. Note the effectiveness of larger % changes. The half-life of a hypothetical compound in the aquarium (t1/2 or time in changes to remove half) occurs at 8, 3, 2, 1 changes respectively.

Consider this hypothetical situation. You are cleaning up around the tank, when someone walks by and accidentally spills a cleaning solution into your tank. What do you do? Once the initial panic subsides, you realize that you need to perform some water changes. The chemical, luckily, is not very toxic, but it is still a concern and using activated carbon and a skimmer will not remove it. So, you have a bucket of prepared saltwater… is it enough?

Figure 2 illustrates the remaining fraction (in %) of the compound after water changes of varying sizes. Ten, twenty, and thirty percent changes have differing effectiveness in removal of the cleaner.

If you were to perform 10% changes on your tank to remove the cleaner, it would take you 23 changes of water to get the level of the compound in the tank down to less than 10% (9.85%) of the starting concentration. Likewise at 20% and 30% volume changed, it would take you 11 and 7 water changes to bring the level down to 8.6% and 8.2% of the starting concentration respectively. While I would not recommend a 50% water volume change for most tanks, it is very much more effective in eliminating the original spill of cleaner. It would take only 4 water changes to bring the level down to below 10% (6%) of the original concentration.

The risk, at 50% water volume changed, typically comes from shock and stress to the occupants of the tank due to salinity, temperature, and other physical- chemical differences that occur between old tank water and new water. For this reason, unless it is a true emergency situation, I do not promote changing 50% of the water volume.

Figure 3 – Illustration of the % remaining and the actual parts per million (mg/liter) remaining assuming 2ppm addition of a toxicant.

The case of the 10% water change is also negative. While 10% is better than no actual volume changed regularly, it will take a great deal of time to remove any potential threats and replace those compounds that are valuable to the tank. In figure 3, it illustrates 10% changes and the effect of such a small change. Thirty consecutive water changes of 10% total volume means that you will still be left with almost 5% of the starting concentration of contaminants. In line with that consideration is that fact that at best, 30 water changes will take half a year to complete at more than one per week.

The effects of water changes are exemplified in cases where people have underpowered skimmers, no skimmer at all, or very small tanks. Changing water on a regular basis can have the same effect as running a skimmer at removal of organic wastes, although the lack of a skimmer will allow for more bacterial decomposition of the compounds (less real-time removal) prior to elimination.

After considering the result of changing varying percentages of water volume, I highly suggest 20 or 30% water changes, performed on a semi-regular basis. Usually every 2 to 3 weeks or whenever conditions in the tank appear to change or the water turns somewhat yellow due to the organic acids from decomposition building up.

The table gives the most common size tanks and their nominal and estimated volumes in gallons. The estimated volume is 70% of the maximal tank volume as water assuming that sand, rock, and various forms of life occupy the remaining space. Twenty and thirty percent change volumes (in gallons) are shown.

Feature Aquarium: The Aquarium Of Gabriel