Fish locomotive styles are a rarely discussed aspect of marine aquarium care. However, the ability to understand and interpret a fish’s swimming pattern can lead to a better understanding of the fish’s feeding patterns, predatory activity, prey avoidance, breeding styles and overall health. 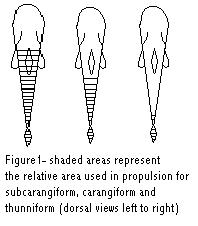 To understand how each of these patterns is useful to the home aquarist, we need to discuss common locomotive styles. This is often difficult for home hobbyists because literature in this field is uncommon, and uses many terms interchangeably (i.e. modes, styles, patterns, techniques). Fishes as a whole utilize several techniques for moving through the water column (Breder 1926). Fishes also use special techniques to move through or on land and air. Subsequently any given species of fishes will use multiple swimming modes, which adds complexity to the interpretation of these modes. Swimming modes can generally be divided into two basic groups. These divisions are based upon physiological mechanics and are termed Body and Caudal Fin (BCF) and Median and or Paired Fin (MPF) propulsion (Webb 1998). Body and Caudal Fin swimming uses the body to undulate waves towards the caudal fin (tail) which may also undulate, thus propelling the fish. Median and Paired Fin propulsion is the undulation or oscillation of fins (pectoral, pelvic, anal, and dorsal) to push the fish through the water column. By comparing BCF and MPF mechanics we better understand the benefits and costs associated with each. Body Caudal Fin styles allow for greater acceleration and speed, while MPF provides better maneuverability (Sfakiotakis et al 1999). Fishes use different combinations of different muscles for the differing locomotive styles. Fishes often change their physiological mechanics to utilize specific muscles and locomotive styles in relation to different swimming speeds (Webb 1998). Many fish will use a form of MPF locomotion for low speeds, but are forced to switch to a more energetically costly swimming style of BCF when engaged in rapid swimming (approximately 4Ls^-1) activities (Korsmeyer et al 2002). In addition to this division a second classification system separating Periodic and Transient swimming is also common. One of the most useful aspects of the Periodic vs.
Transient system is that it allows for comparison between two different swimming modes, which may both be the primary swimming mechanism for the two (or more) fishes being compared. 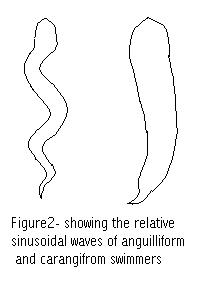 Fishes have evolved to use whatever works best for their individual survivability. Commonalties in swimming patterns exist within fish families, and are often named accordingly. It is important to realize that these techniques did not evolve post behaviorally, nor pre behaviorally. Rather these modes of transportation have been intricately linked to the behavioral development of fishes. The following are descriptions of locomotive styles commonly found in aquarium fishes (based on Helfman et al 1997).

Accounts for the primary propulsive forces in 85% of the fish families (Videler 1993). 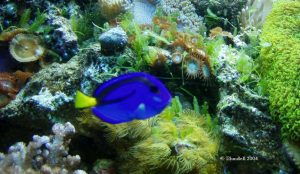 Named for the elongate fishes typical of this locomotive style, the eels. During Anguilliform locomotion undulatory waves are passed down the entire length of the body. Typically, the head does not act in the wave motion, but remains relatively fixed to the body. The body is flexible and by definition will be bent into the shape of at least one-half of a sin wave.

Less musculature used than in Anguilliform Locomotion. Between ½ and 2/3 of body muscle mass is used to generate undulating waves down the body. Common swimming mode for many familiar freshwater fishes (trout, salmon). 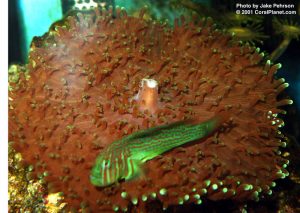 Greatest “achievement” of fish swimming modes. Named after the incredibly fast swimming Tuna Fishes. Also seen in Sharks and other long distance cruisers. This technique has evolved independently amongst different lineages. Thunniform locomotion allows for the greatest long-term speed. Thrust is generated by the caudal fin, which is large strong and forked. The caudal fin is attached by a narrow peduncle region, which contains large amounts of tendons connected to massive musculature systems. 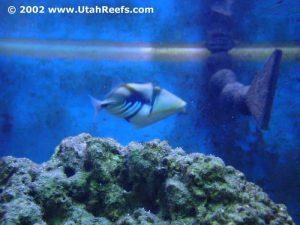 Very similar in principle to Thuniiform, but vastly different effectiveness. Ostraciiform locomotion uses a slow back and forth motion, similar to a dog wagging its tail. The tail is relatively small and unable to forcefully push through the water. Often times, these caudal fins are not attached to the highly musculature structures, but rather to highly rigid skeletal systems. Accompanying the evolution of this slow swimming style, fishes evolved other means of deterring predators. Their two most common means of deterring predators are internal poisons, and external spines.

Accounts for the primary propulsive forces in 15% of the fish families (Videler 1993). 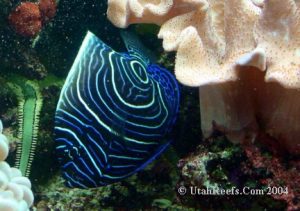 Laterally compressed fish such as angelfish have an increased surface area which provides greater maneuverability.

Named after the Labridae family (wrasse). Pectoral fins are used to push water, similar to a rowing effect. It is important to note that this mode is commonly used by many fish families for stabilization. One example are the Acanthurids (Tangs) which often use their pectoral fins for stabilization when staying in place, but do not use them while swimming forward. During Labriform locomotion pectoral fins are held in a broad position while pushing water backward, to generate thrust (power stroke). During the return phase (recovery stroke) pectoral fins are held close to level to reduce drag (negative thrust). Often times, following the power stroke all fins are held firmly against the body to increase streamlining. This swimming style is often seen in “torpedo shaped” fishes. This shape has a natural tendency to keep the fish heading in a straight line. Because many of the fishes using this method as the primary swimming mode lack swim bladder buoyancy control, it is common for them to constantly swim. Combing the principles of straight-line swimming and constant propulsion, these fish tend to cover great distances as the continuously cruise around the reef habitat. 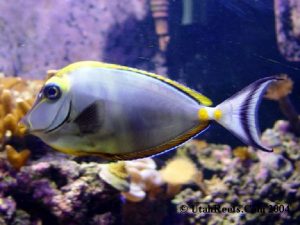 Surgeonfish often use pectoral fins for stabilization, but rely on their long bodies and tails for fast speed swimming.

This locomotive style utilizes undulations passing along the dorsal fin. Very few aquarium fishes use this locomotive pattern. In fact, it is rarely discussed because the fishes typifying this style are unknown or unfamiliar to marine fish hobbyists. However, there is one family of fishes that are common in aquariums which use Amiiform locomotion. They are the Seahorses. Seahorses often swim “forward” by “standing up” and using their dorsal fins to undulate or oscillate. The rate at which their fins may oscillate is quite rapid and Amiiform swimmers in general can have many wavelengths moving across their dorsal fin at any given time. Seahorses can have dorsal waves moving at up to 70 Hz (Helfman et al 1997).

Several factors, which were not discussed in this paper, have dramatic effects on fish locomotive styles. These factors include oxygen usage, visual disruption (camouflage), vortices, schooling effects, handicapped traits, and most importantly the roles of non-swimming usage of fins.

Swimming pattern analysis may not be a primary method for aquaria health assessment. However, it may be a useful tool as a secondary indicator for a fish’s health and behavioral modifications. Additionally, as home aquarists learn more about their tank inhabitants, they can better provide environments for them. It is important to remember “an aquarist’s obligation should not be taken lightly” (Michael 2001 p.10). 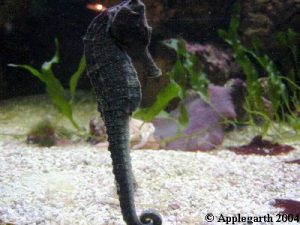 This paper would not have been possible without the help and support of several people. I would like to thank Dave Daniels for his help with the digital imaging of the diagrams. I would also like to thank Suzy Applegarth, Jake Pehrson, William Spencer, and The Wasatch Marine Aquarium Society, for the usages of their pictures. Of course much appreciation is given to the previous research work of many, especially those who were cited in this project. Finally, I would like to thank the staff of the Advanced Aquarist’s Online Magazine for their support of this article. 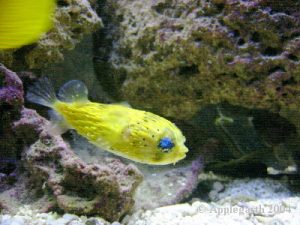 Adam Blundell is the president of the Wasatch Marine Aquarium Society in Salt Lake City, Utah. He is also the President and Director of the Aquatic & Terrestrial Research Team. Both of these organizations are centered upon local hobbyists, and their efforts to increase education and information about marine life husbandry. All feedback is welcomed at adamblundell@hotmail.com.