Wrecks of the Red Sea: Coral Reefs of Iron, History and Life

Five thirty in the morning; a chill night breeze blows from the Sinai, rippling the sea, which laps against the hulls of our inflatable boats tethered to the stern, past the dive deck. The sky is clear, as it so frequently is here, and a low moon is beaten into retreat by the sun rising over the mountains where Moses trod. Yasser, the steward, hands me a mug of Yellow Label tea and heads below to check the dive plan for the day. “It will be hot,” he says as he passes. “And wind will go.” Several days of calm weather have seen the temperatures in the 30s even at sea. The visibility should be excellent – the water looks ‘gin clear.’

The previous night, after a day of shallow dives and camera checks, we moored at Sha’ab Ali, a reef system close to the mouth of the Gulf of Suez. Below us lies probably the most famous diveable shipwreck in the world – the SS Thistlegorm. Following a short briefing session and checking our gas mix, we slip beneath the already diminishing waves. Last night, Ibrahim the guide, tied a line to the wreck – but we don’t need it, as there is no current and we can just drop in free fall down towards the hulking shadow below. We aim for the bow and, as it comes into view, I remember seeing the footage shot in 1956 by Cousteau’s crew when they found this 127metre cargo ship, built in Sunderland so many miles away. I can see the remains of the railings that were once covered in coral. Since her discovery, loss and later rediscovery in the early 1990s the Thistlegorm has lost much of the life which once graced her superstructure. Years of tying on by dive boats, clumsy divers, souvenir hunters and ineffectual protection from the authorities have left her bereft of much of her former glory. 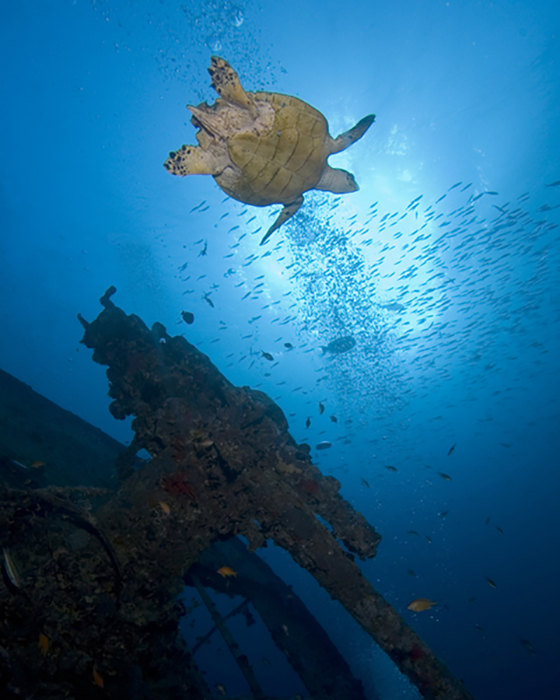 A Hawksbill turtle swims over an anti aircraft gun on the SS Thistlegorm.

Still, the ship’s mainly intact structure, resting on a sandy bottom at about thirty metres, attracts a myriad of life, bathed in tropical sun in these sediment free waters. As we gently fin past her deck winch, we spook a Hawksbill Turtle which swims upwards through an ever present cloud of Mackerel like Red Sea Fusiliers and the large, curious dinner plate sized Batfish that use the wreck as they would any other reef crest – a place to shelter and feed. Venturing into the holds and companion ways brings the history of the wreck to life as our torches pick out the machinery of war, now idle and rusting as filter feeding soft corals, colonial anemones and Cock’s Comb Oysters provide a living wallpaper for fish such as Dusky Sweeper and Soldier Fish – normally fish of caves and more natural overhangs.

Further tours of the holds reveal a wealth of war time materiel, Spitfire wings, Lee Enfield rifles, Morris trucks, radio spares and the very, very large amount of unexploded shells and munitions that now shelter shoals of fish. The fascinating dive site of today hides a tragic past – the **** bombers that sank the Thistlegorm detonated thousands of pounds of ordnance which blew the ship apart, hurling two steam locomotives she was carrying into the sky to come to rest off her sides. Survivors talk of an explosion which lit the sky for miles around and indeed gave away the position of another ship at anchor which was sunk days later. Every year, divers lay wreaths on the Thistlegorm to commemorate the nine seamen who lost their lives in October 1941.

Whilst the Thistlegorm may be the most important attraction for divers in the Egyptian Red Sea, attracting hundreds of divers a day and their tourist dollars, it is not the greatest for wildlife. Wreck-heads from across the globe are drawn here to explore, whereas I am interested in the life of these sunken ships and am happy when we leave to head south, the horizon is already littered with day boats from resorts like Sharm el Sheikh. The proximity of the Suez Canal and the difficulty of navigating the reefs of the area have meant ships have founded in these waters for centuries. A litany of misfortune, incompetence and occasional fraudulent wrecking is written across the reefs and lagoons of this history rich area in iron and steel. Frequently fought over the Sinai Peninsula is now peaceful enough, though awash with ever busier and brasher resorts and the ever present pressures tourism places on the natural environment. The divers and photographers, like myself, who visit these remarkable seas will discuss long into the night the pros and cons of restricting diver numbers, provisions of better moorings and the day boats which allow scuba novices the chance to destroy corals with their hired fins. 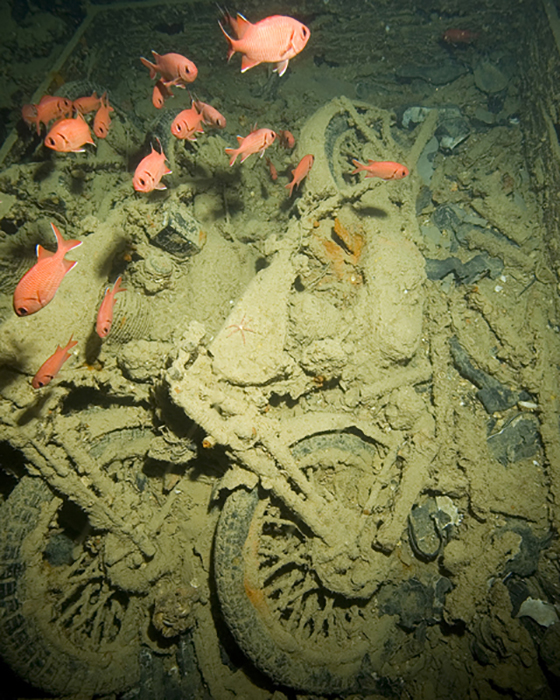 The following day with our bodies rich in dissolved nitrogen from the deep dives of the day before we tour some of the older wrecks such as the once proud and sleek P & O steamer The Carnatic which ran aground at Sha’ab Abu Nuhas in 1869. The remaining iron structure of the wreck has formed a many tiered habitat, with varied currents and light levels – ideal conditions for colonisation by the greatest number of organisms – always an indication of a rich local biodiversity. Carnation corals such as the delicate Dendronepthya sway in the current; whilst lionfish lazily chase glassfish around girders coated with birds nest corals and soft corals moving in the gentle current. The ubiquitous anthias, the brilliant orange wreck fish of the indo-pacific ‘pulse’ in their thousands, in and out of the coral heads, deeper coloured males swimming further out as they keep an eye on their harems. A sudden flash of silver and the Anthias disappear as hunting trevally speed in from the blue, sleek and superbly designed for speed. 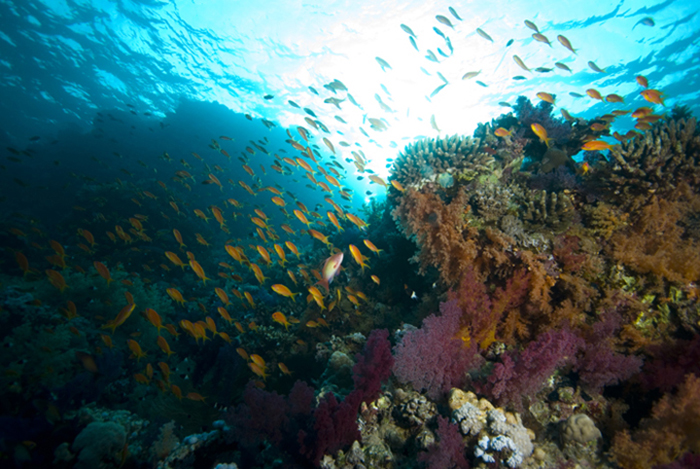 The male Lyretail Anthias (centre) guards his harem. Anthias exist in unimaginable numbers always facing into the current alert for particles of food and free swimming crustaceans in the plankton.

We pause to photograph a large anemone with its resident clownfish; these feisty fish make just audible grunts to deter predators as they dash in and out from the anemone’s stinging tentacles. 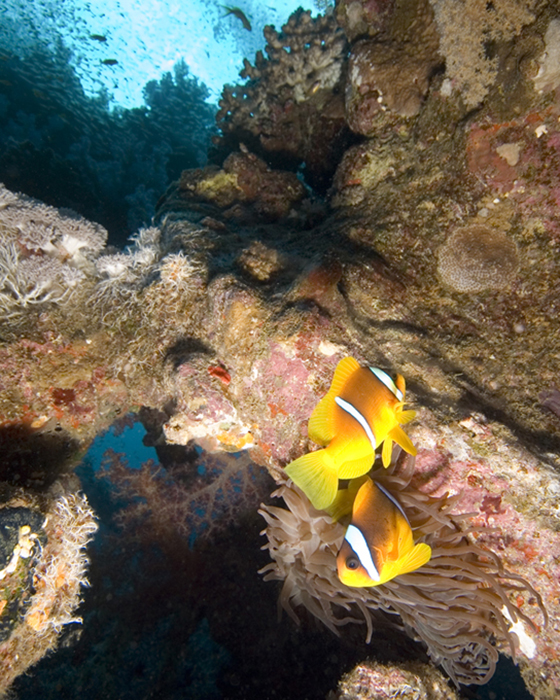 Red Sea Anemone fish defend their territory. This anemone is attached to what were once the ribs of the ship.

As so often happens on a reef you can lose yourself in the spectacle and miss so much – a large Napoleon Wrasse, perhaps a metre long, the biggest of the wrasse family, glides serenely past, its intelligent eye checks us out, though it keeps its distance. Napoleon Wrasse are threatened fish – thousands are spear fished or caught live and exported for their lips which have aphrodisiac properties it is said. Within the fifty or so miles of the coast included in the Ras Mohammed National Park, that covers the tip of Sinai, the fish have at least theoretical protection. 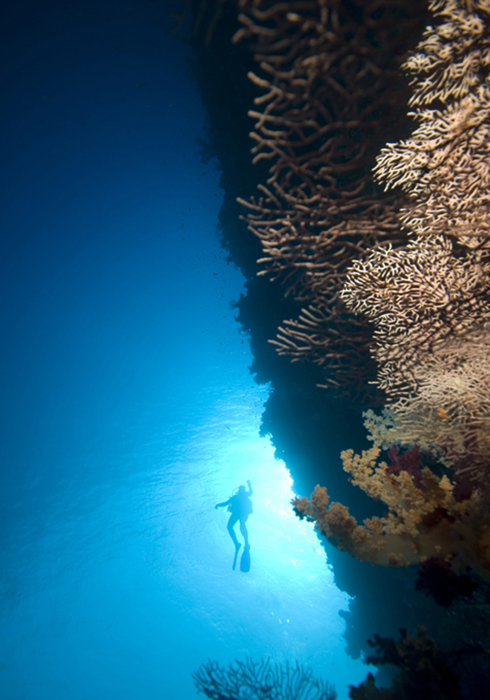 A lone diver lends some scale to the reef wall, in this case formed by an iron hull not rock.

The following day sees a deep dive as we return to the events of the Second World War and visit the ship so fatally illuminated by the sinking of the Thistlegorm – the Rosalie Moller. The ‘Rosie’ lies deeper and receives far fewer visitors than other, shallower wrecks. As we reach her deck at over thirty five metres the first hint of nitrogen narcosis makes itself known and we feel light headed, our air is limited too, at this pressure it takes a lot to fill our lungs and normally inert gases behave very differently. We aim for the bow and look up to see the mast ringed with glassfish before heading into the wheelhouse where we disturb a shoal of thousands of Golden Sweepers each about an inch long and highly reflective to confuse predators. Our way out is blocked by three huge Lionfish grown fat on such abundance, I gently move them away with my camera– I don’t need to get stuck on one of their venomous spines, not at this depth! My buddy gestures upwards and there’s a shoal of Barracuda forming a torus above us, silhouetted in the sun – the surface is now over forty metres above. 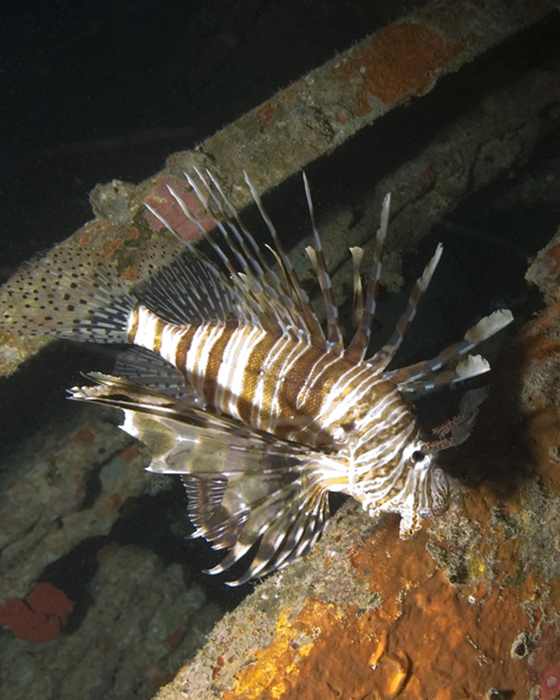 It’s darker down here, the corals of the shallows that employ photosynthetic symbiotic algae in their tissues to produce sugars for the corals’ metabolism, are less abundant. Down here, energy needs to be gathered from the plankton and in the case of the ghostly tube anemones that cast their white tentacles into the current, the odd unwary fish.

All too briefly our gauges signal we must leave, we ascend following the mast, slowly to avoid injury as our bodies react to the change in pressure. We stop at the crow’s nest and watch a pair of banded pipefish explore their tiny world. They know nothing of life elsewhere, around them is nothing but blue and they have taken up residence in what was once a swaying windswept platform. 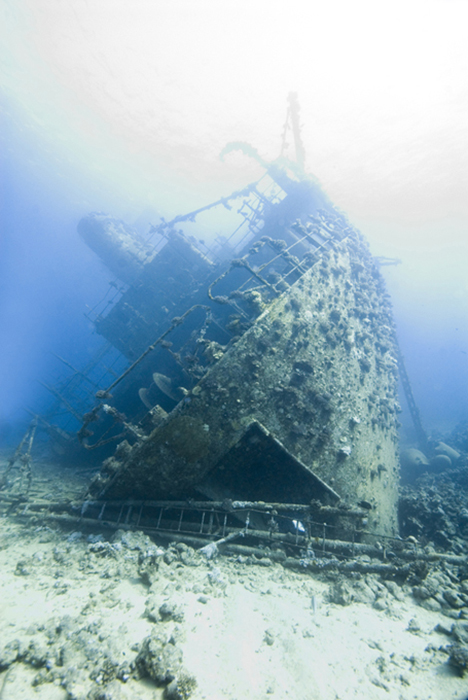 Sunk in 1983 the Giannis D is still noticeably a ship, but along her flanks the reef building corals have taken a firm hold and wherever corals grow fish and other life will congregate.

Since shooting these images, the last upright mast on the Rosie has been toppled, a lazy dive boat guide tying on perhaps, instead of making a deeper dive and using the bow. I cannot help but feel this is somehow the fate for all the wrecks of the red sea. Their very beauty and fascination will be their downfall, but perhaps the Rosie has been protected, no longer do divers have the ease of descending down a mast, this act of vandalism may make her a harder wreck to explore.

As for the Thistlegorm and the other wrecks of the Red Sea, their future is uncertain. Political instability and its impact on tourism could see the sites being visited less, but will that mean these fascinating and amazing artificial reefs will dwindle in value? Interesting times. 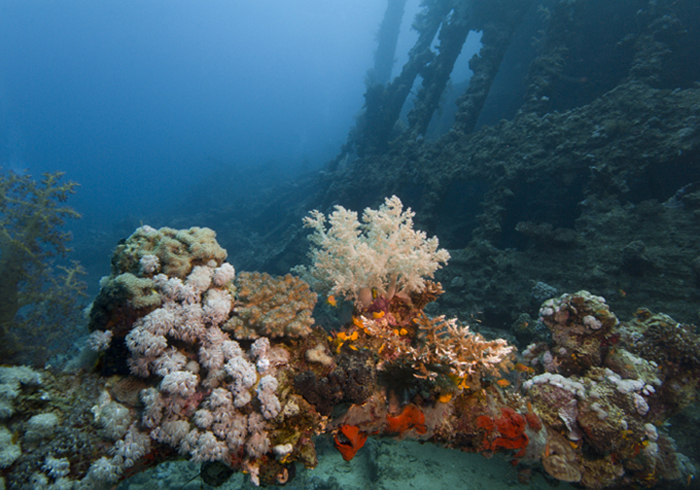 Corals reproduce through a free swimming stage, similar to tiny jellyfish and require an area clear of other corals upon which to settle and begin to grow, reef rock or in this case plate steel are equally acceptable. It is only a matter of time before the reef takes over as the steel weakens and collapses.