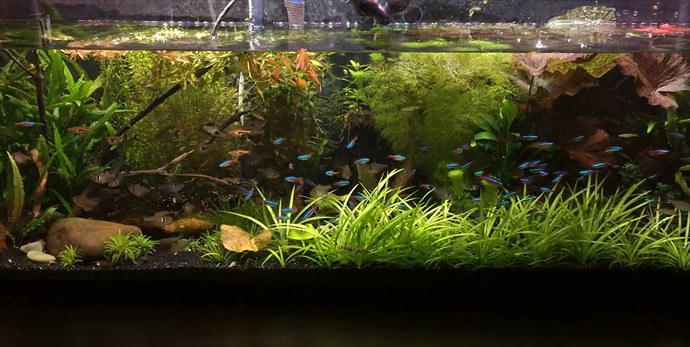 The soothing pitter-patter of raindrops.  The dramatic effects of lightning and thunder.  A few adventurous aquarists have been able to successfully recreate storm effects (including simulated raindrops) over their aquariums, both freshwater planted and saltwater reef.

This is Angelo Garcia’s lush 55 gallon planted tank.  His tank is gorgeous by itself, but adding simulated rain and lightning really puts this aquarium in a league of its own.  At the time of the video (September 2014), Angelo was using a gravity system to produce the rain effect, with plans to switch a more practical pump-based system.

Angelo disclosed there’s a touch of special effects in this video; the thunder sound was added in post process.

For further inspiration, we share this remarkable tropical thunderstorm reef we first published back in 2011.

This is likely one of the most elaborate LFS tank you will ever see.  The folks at HPAquaristik (Germany) uploaded a series of short videos of their new main reef display.  Suffice it to say, we are in awe of the incredible storm-simulation system for their massive system.

We’re not just talking about random cloud cover simulation using LED lighting (ho-hum nowadays).  We’re talking about a full blown storm simulation system with beautifully simulated ambient lights and “lightning strikes”… plus real rainfall!  Freshwater is fed into an irrigation system suspended over the tank;  Each day, a simulated thunder and rain storm showers the main display with freshwater for a couple of minutes.  This is without a doubt the fanciest evaporation top-off system we know.

Unless you’re a serious malcontent, there’s no way these videos do not inspire you.  First, a walk-around video of the massive reef system:

Above-the-tank view of the simulation in action: