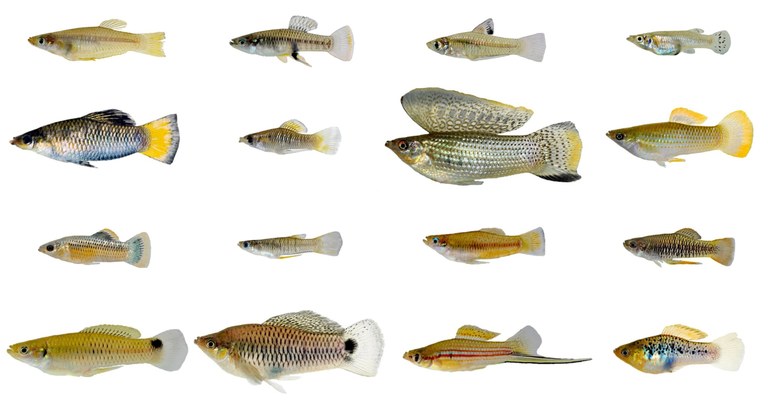 Samples of fish species from the Poeciliidae family show the diversity in color, fin size and body shape. Kansas State University researchers studied 112 species of these live-bearing fishes and found that males and females evolve differently.

Tobler and Culumber published their findings in the Nature Ecology and Evolution journal article, “Sex-specific evolution during the diversification of live-bearing fishes.”

“In the big picture, this means that males and females are different and that matters not only within species but also in terms of shaping broad-scale evolutionary outcomes,” Tobler said. “Acknowledging that the sexes are different really affects how we make inferences about how evolutionary change has actually unfolded.”

Tobler and Culumber spent two and a half years studying more than 100 species of Poeciliidae, or live-bearing fish. Unlike the majority of fish in which females lay eggs that are later fertilized by males, live-bearers — which include species such as mollies, platies, guppies, swordtails and mosquitofish — have internal fertilization. Live-bearers retain eggs during pregnancy and give birth to live young, similar to mammals like humans.

Tobler said the novelty of this study is that, when studying evolution, scientists often measure females and males separately and then average measurements of the two sexes together to attempt an overall look at the species. The problem with this method is that the average between a male and female does not exist. Tobler and Culumber wanted to know if this was an accurate method for studying evolution and if the same forces that influence male and female evolution also influence the formation of new species.

The researchers collected data in two ways. First, they studied variation in the body shape and fin size of male and female live-bearing fishes. Culumber visited museums and university collections to gather more than 1,500 images from which measurements were collected for 112 species of the family Poeciliidae. Second, Culumber identified 10,000 locations where the fish were known to live and used global climatic data to characterize each specie’s environment. Occurrence data were based on more than a century of live-bearer biology fieldwork.

The researchers compared the results when they looked at data from males and females separately to when they used the nonexistent sex-averaged data.

“When we analyzed males and females separately, we got completely different answers,” Tobler said. “When we averaged males and females, it was not at all reflective of how the males or the females evolve. We can’t just lump the sexes together because it misrepresents how evolution has proceeded across this family of fish.”

The study also found that the body shape of male fish evolves faster than that of females, which is likely because sexual selection accelerates the speed of evolution in males, Tobler said.

In general, male live-bearing fish can use two contrasting reproductive strategies: courting and coercing. Courters are flashy males with colorful scales and large fins to attract cooperating females. Coercers are less conspicuous males that use attack matings to reproduce with as many females as possible. Evolution of male body shape particularly affects traits associated with these different mating strategies.

“The assumption that people often make is that on a broad evolutionary scale, natural selection and adaptation drive most of the patterns in the evolution of traits,” Tobler said. “That’s true for females in our case, but not for males. Male morphological evolution is really more of a consequence of achieving high mating success.”

For decades, scientists have thought that sexual selection was a major factor influencing the formation of new species in live-bearing fishes. Tobler and Culumber found that differences in the environment were more important for generating new species than differences in characteristics that influence male mating success.

The researchers are planning future studies with live male and female fish to better understand the changes that have occurred in male and female body shape over 60 million years of evolution.