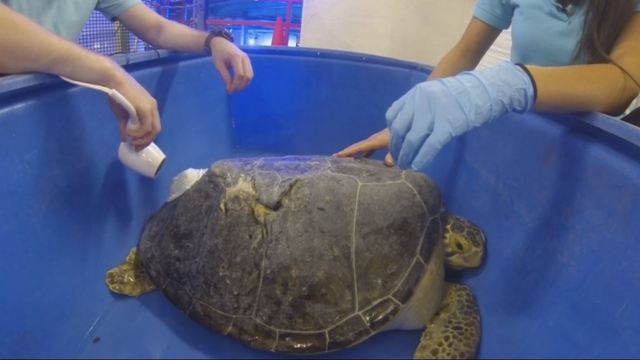 ‘Bubble butt’, although a phrase not ordinarily associated with marine life, is a syndrome that affects turtles. ‘Bubble butt’ occurs when turtles get an air pocket under their shell, causing too much buoyancy and an inability of the turtles to dive underwater. This condition can often be caused by turtles swallowing harmful debris and pollutants like plastic or being impacted by boats. The trapped gas from the decomposition of the debris in the turtles stomach leads to the air pocket, which causes them to float at the top of the surface. A sea turtle unable to dive would eventually starve to death and become an easy target for predators. In this case, Seamour a rescued sea turtle from Florida, was hit by a boat, which caused the air pocket to form. Luckily for Seamour he was rescued by the Mall Of America Aquarium. Based on Seamour’s injuries, the air pocket could not be removed without causing damage to internal organs. Therefore, the aquarium attached a weight to Seamour’s shell to help him swim more naturally and counteract the buoyancy effect of the air pocket. Unfortunately, Seamour will not be able to be released back into the wild, as the weight is a just temporary solution, as the turtles shell will shed and the weight will eventually fall off. Therefore, Seamour will remain at the aquarium so his condition can be continually monitored and he will be able to remain swimming naturally. MORE