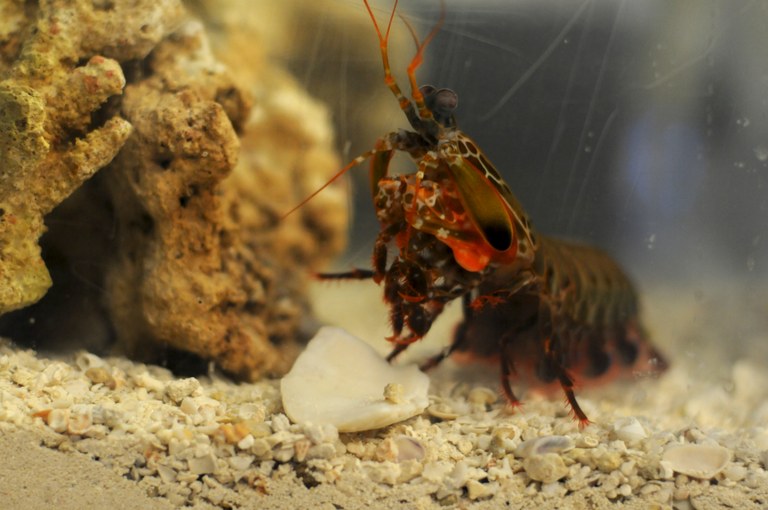 
From the University of California at Riverside:

The mantis shrimp is able to repeatedly pummel the shells of prey using a hammer-like appendage that can withstand rapid-fire blows by neutralizing certain frequencies of “shear waves,” according to a new research paper by University of California, Riverside and Purdue University engineers.

The club is made of a composite material containing fibers of chitin, the same substance found in many marine crustacean shells and insect exoskeletons but arranged in a helicoidal structure that resembles a spiral staircase.

This spiral architecture, the new research shows, is naturally designed to survive the repeated high-velocity blows by filtering out certain frequencies of waves, called shear waves, which are particularly damaging.

The findings could allow researchers to use similar filtering principles for the development of new types of composite materials for applications including aerospace and automotive frames, body armor and athletic gear, including football helmets.

“This is a novel concept,” said David Kisailus, the Winston Chung Endowed Professor in Energy Innovation at UC Riverside’s Bourns College of Engineering. “It implies that we can make composite materials able to filter certain stress waves that would otherwise damage the material.”

The “dactyl club” can reach an acceleration of 10,000 Gs, unleashing a barrage of impacts with the speed of a .22 caliber bullet.

“The smasher mantis shrimp will hit many times per day. It is amazing,” said Pablo Zavattieri, an associate professor in the Lyles School of Civil Engineering and a University Faculty Scholar at Purdue University.

The researchers modeled the structure with the same mathematical equations used to study materials in solid-state physics and photonics, showing the structure possesses “bandgaps” that filter out the damaging effects of shear waves traveling at the speed of sound.

Findings were detailed in a research paper published online in the journal Acta Biomaterialia. The paper will appear in a future print issue of the journal.

The research, which is ongoing and also will include efforts to create synthetic materials with filtering properties, has been funded by the National Science Foundation and the U.S. Air Force Office of Scientific Research.