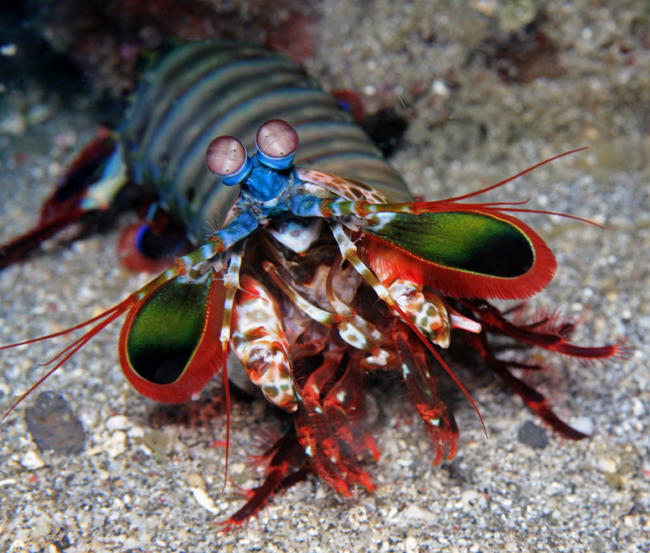 Of all the amazing and mysterious creatures we can find on the reef there are some that stand “out of the crowd”.  Cephalopods for example. Their high intelligence, communication skills and camouflage abilities amaze scientists to this day. But there is yet another invertebrate that is a subject of ongoing studies, one that physical build and behavior is a puzzle not yet fully understood. It is called a Mantis shrimp and it’s a member of the order Stomatopoda. The common name is misleading as it is not a shrimp nor it is related to mantids. It’s distant cousins are lobsters and crabs.

Seeing one of the more colorful species of mantis shrimp, a peacock mantis shrimp (Odontodactylus scyllarus) from up close is like looking at an alien from another planet. Mesmerizing colors and monster-like appearance are just one side of this invertebrate. Mantis shrimps are skilled predators and their killing techniques can be placed in the same league as those of sharks and dolphins. It posses a deadly weapon in a form of spring loaded claw that works as a sledge hammer or a spear, smashing and piercing hard shells of it’s victim snails, crabs and other bottom-dwelling creatures. The speed of this blow can reach 50mph, the fastest of any known animal. It’s so powerful that cavitation bubbles forms and immediately implode releasing heat and sound that stunts and often kills prey on contact. In everyday language, the energy released by the blow is comparable to .22 caliber bullet!!! All that gave the mantis shrimp a bad reputation of thumb splitter and glass breaker. While the first is a proven fact (just ask a fisherman that have seen it and is missing a finger), the latter is a rarity attributed to other facts. Mantis shrimp needs a lot of stored energy to perform it’s act and it knows better than waste it on the glass. Nevertheless, I can’t say it never happen, so an acrylic tank would be a better choice to keep this amazing animal, as it is much stronger than glass.

As you may suspect by now, mantis shrimps are solitary and highly territorial creatures capable of killing animals larger than themselves and shouldn’t be kept with other tankmates. It needs a spacious tank with rock work it can dig under and a good filtration system as it is a messy eater. It has to be handled with care as it can really hurt you when irritated (forget about those youtube videos where people are patting their Mantis shrimps, it’s asking for trouble). I remember spending hours with my face to the glass watching them in public aquariums, but I don’t have a first hand experience with Mantis shrimps of yet. However, I will certainly try keeping it some time in my life as they fascinated me since I first heard of them.

In fact, I read about them long before I gained interest in reefkeeping and it was in a popular science magazine! Well, originally the topic of this article was focused on one particular body part of a mantis shrimp, but I got carried away at some point…

That organ is it’s eye. Of all the other perfectly “designed” by evolution physical aspects of a mantis shrimp, it’s the eye that force scientists to scratch their heads trying to understand how it works and what’s the purpose of it’s complexity. True is, there is no vision aparatus more sophisticated than a Mantis shrimp’s eye. We humans have a very limited visual spectrum compared to that invertebrate. We can see light wavelenghts from about 400 nanometers, which we perceive as a violet color to about 700 nanometer, the red spectrum. In contrary, mantis shrimp visual field extend to the ultraviolet and infrared wavelengths. In addition, it can detect and process linear and circular polarized light. For us, linear polarized light is only a glare on transparent surfaces (like water surface) we  eliminate wearing polarized sunglasses, while circular polarized light is invisible to us. On top of that, Mantis shrimp can move each one of it’s pair of eyes independently from the other.

For those who are interested in the topic, read an interesting article about Mantis shrimp vision written by Les Wilk,

Understanding how Mantis shrimp’s eye works can be a key to development of new, higher capacity electronic media storage devices. It’s eye works similar to light detector that can be found in today’s DVD and Blu-Ray players, but it’s much more sophisticated.

Mantis shrimp is truly a fascinating and mysterious creature, one that is worth his own aquarium and time one need to spend to care for it needs. Just be careful with those fingers!