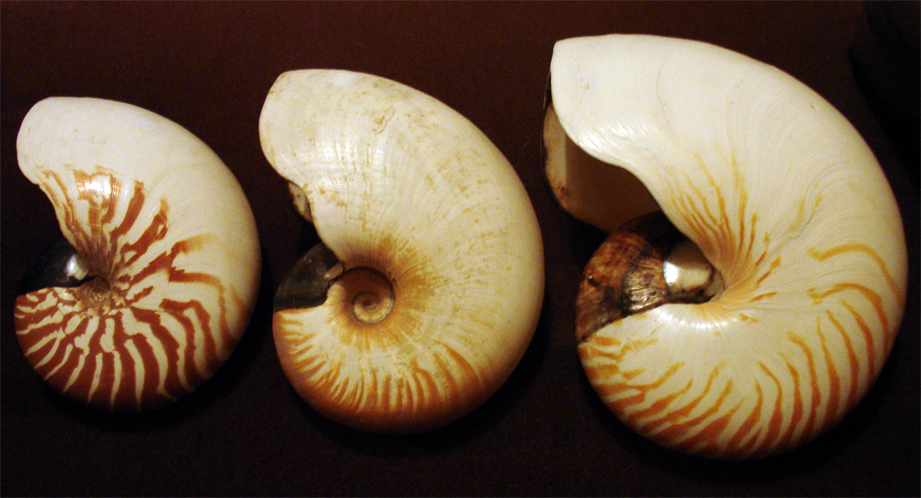 The Chambered Nautilus is one of the ocean’s most iconic living fossils, belonging to a lineage which has remained virtually unchanged since the Cretaceous. Still, no animal can truly remain the same over such a vast expanse of time; the process of speciation must always advance, even if it isn’t always discernible to us. And so, despite the nautilus’ considerable zoological fame, taxonomists have been bickering amongst themselves for more than a century regarding the true number of extant species involved. Over the years, dozens of different taxa have been suggested, but a newly published molecular study might finally be helping to lend some clarity.

Nautilus pompilius has traditionally been regarded as the largest and the most widespread species, with records from all across the Coral Triangle and southwards to Fiji, Tonga and Samoa. It was originally described by Linnaeus, but, as is often the case with the shelled mollusks, a litany of additional names have subsequently been applied, usually based on specimens which displayed some minor divergence in shape, size or coloration—N. repertus, N. moretoni, N. alumnus, N. stenomphalus, N. belauensis (to name just a few). Their relative validity has often been called into question, but genuine consensus on the matter has been hard to come by using morphology alone, which is why a thorough genetic investigation has been so badly needed.

In addition, there have been three other species that have generally been considered of stronger standing. Nautilus macromphalus is known definitively only from the waters around New Caledonia and is recognized for its smaller shell whose central umbilicus (i.e. the axial portion of the spiral) is uncovered. There are also a pair of species classified separately in the genus Allonautilus: A. scrobiculatus from Papua New Guinea and the Solomon Islands and the rarely collected A. perforatus from Bali. These differ in a number of subtle traits: quadrate (vs ovate) shell whorls… a deeply exposed umbilicus… finer shell patterning… a gelatinous periostracal covering on the shell… as well as nuances of the gill structure and male reproductive system.

Still, despite all these considerable morphological differences, it was suggested by the authors of this new genus (Ward & Saunder 1997) that Allonautilus might merely represent a paedomorphic lineage derived from within Nautilus, rather than being a true sister group. This notion was based on some of the similarities shared by adult Allonautilus and juveniles of Nautilus, but genetic data has consistently placed the two as distant relatives. Enter Combosch et al. 2017, the first study to make use of next-generation sequencing techniques in this group. Whereas previous efforts focused on just one or two individual genes, this research makes use of snippets from the entire genome, providing a much clearer evolutionary picture.

And it turns out that our current taxonomy is in many ways woefully inadequate. Among the living nautiloids, the main evolutionary divide is indeed between Allonautilus and Nautilus; however, we still can’t say for sure if these are true sister groups until an analysis of the full fossil record (which is quite diverse) is also included—Allonautilus might simply be the last living vestige from a different branch of Nautilus. 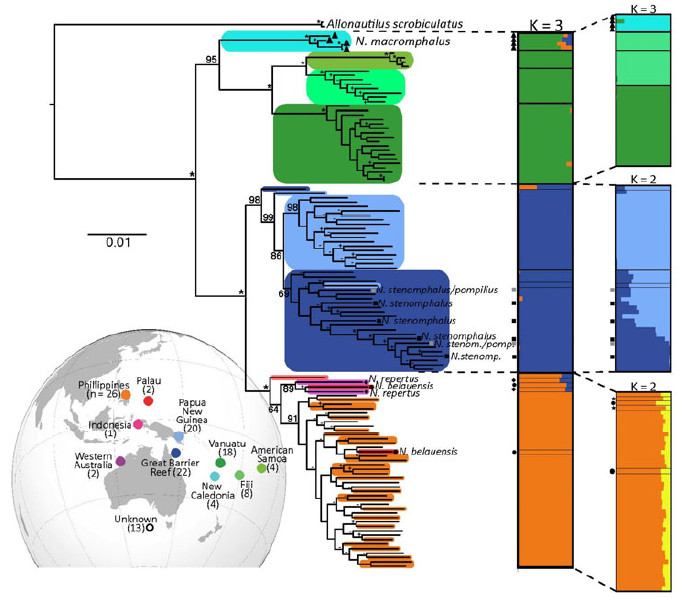 When we turn our attention towards Nautilus, we find two major clades which divide neatly according to biogeography. In the South Pacific occurs a highly speciated and strongly endemic radiation of populations, most of which are still undescribed. Many of these have been casually noted as showing similarities in shell morphology by earlier researchers, and, from an ecological perspective, it has been observed that these often occur more shallowly than their colleagues from the Coral Triangle. The New Caledonian Nautilus macromphalus belongs here, as does a similar nautilid from nearby Vanuatu which has previously been identified as a variant of the Chambered Nautilus. The same holds true for a pair of distinct populations found in Fiji and American Samoa (and perhaps Tonga, as a third entry).

Meanwhile, a separate lineage spans a considerably broader range centered on the Coral Triangle, encompassing reefs of the Andaman Sea east to the Philippines, Australia and the Solomon Islands. This is where the classic Chambered Nautilus lurks, but it seems likely that there are multiple isolated populations in this region worthy of recognition as separate species. Those from Australia and Papua New Guinea form a strongly supported group relative to the rest, and even these two subregions seem somewhat distinct from one another, albeit imperfectly. Specimens sampled from New Guinea are fairly homogenous, with virtually no evidence of gene flow coming up from the Great Barrier Reef; however, the opposite can be said for the Aussie contingent. Here we find genetic evidence for a considerable amount of introgression from the New Guineans, implying that there is a one-way flow of immigrant Nautilus coming into Australia.

A somewhat similar situation may hold true for the Indo-Philippines, though data here is considerably sparser, hampering our ability to reliably discern their relationships. In many groups of reef fish, we see endemism that divides these waters into a series of discrete ecoregions—the Philippines, Eastern and Western Indonesia, Northwestern Australia—and, to some extent, this is what we see among the nautilids. Unfortunately, only five samples from outside the Philippines were available, but, with a single exception, these all appear together as a separate lineage. Likely, additional data will confirm that the Indonesian and Western Australian Nautilus are unique.

Now, if you’re wondering why this group of “living fossils” has become so diverse, it’s worth considering how this species reproduces. The eggs laid by a Nautilus are impressively large, roughly the size of a pingpong ball, and the juveniles which hatch from them are, in turn, similarly gargantuan. Without a pelagic larval stage, the ability of these animals to disperse is ultimately limited by their ability to swim, and, while they are well-known for their daily vertical migrations, buoying up towards the surface each night from hundreds of meters deep, these are actually benthic creatures. Flotation, rather than natation, is their forte, and so even relatively narrow expanses of deep water will serve to inhibit their spread. This is how the South Pacific lineage has been able to diversify so extravagantly— oceanic trenches surround all of the major populations… and the same likely holds true for the Coral Triangle Nautilus.

This research can also be applied towards other groups of reef-associated organisms in the West Pacific, particularly those whose juveniles have short or non-existent pelagic stages. Anemonefishes are a fine example; for instance, the distribution of Amphiprion percula and A. ocellaris is almost identical to the Chambered Nautilus. The Pictichromis dottybacks show a similar phenomenon… as do some of the Meiacanthus fangblennies… and, somewhat controversially, a number of new stingray species have recently been described based solely on DNA differences found across the Coral Triangle. As we are slowly discovering, there is a great deal of biodiversity hiding in plain sight. Is it even fair to call the extant nautilids “living fossils” when there is so much variety amongst them, comprising no less than three major evolutionary radiations in the West Pacific?!

As a closing thought, consider the vulnerability these creatures face in today’s oceans. The fossil record shows the genus Nautilus extends back to the late Cretaceous, roughly 100 million years ago, and the larger nautiloid family tree began as far back as the Cambrian. These are, in every sense of the word, survivors from a bygone era, but their low fecundity, poor dispersal, and relatively small population sizes will likely be their undoing if we don’t stop collecting them en masse for their pretty little shells. The aquarium trade is not without its blame here either, as live specimens are regularly exported, albeit in fairly negligible numbers relative to the larger populations involved. Still, so little is know about the health of these populations (several of which, as we’ve seen, are still scientifically undescribed and unstudied) that their continued exploitation as curios needs to come to an abrupt end, lest we sit and watch as they are driven ever closer to the extinction that they have so valiantly been fending off.