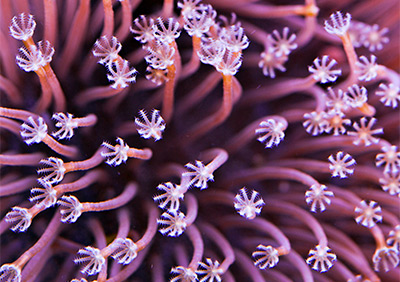 The marine aquarium hobby is second only to the US military when it comes to the number of acronyms its members throw around. (Quite fittingly, this past Monday was the 27th anniversary of my DOE. Shortly after that date, I entered BMT as an A1C and did lots of PC under the direction of a TI before going on to AIT where I got an LOR for violating the UCMJ in advance of my PCS.)

For today’s post, I’d like to address a somewhat common hobby acronym mentioned in an email I received from one of our readers. He quite succinctly queried, “What the heck does ‘PE’ stand for? I see it used in online forums a lot.”

The acronym “PE” has the distinction of representing two terms in our hobby: If you read it in the context of a discussion on foods and feeding, the acronym likely refers to Piscine Energetics, a company headquartered in British Columbia that supplies PE Mysis®, a popular brand of Mysis relicta, among other products. But in hobby parlance, “PE” can also stand for “polyp extension,” which is exactly what it sounds like—the degree to which a coral extends its polyps. Why does this matter MORE