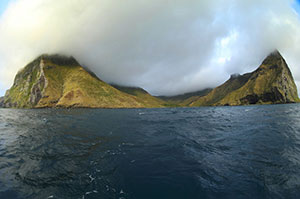 Below the surface of silvery waters of beautiful Southern French Polynesian Islands Rapa and Marotiri, a wealth of sea life glides about. The reefs are healthy, thriving and rich with vitality. One of the most bountiful creatures scattered throughout these reefs is the long-spined sea urchin (Diadema antillarum). The team of Pristine Seas,  a project dedicated to protecting the last gems of the wild ocean, plunged 20 meters below the ocean’s surface to explore the sea floor over a span of five days.


One of the things that piqued the team’s interest was the seemingly inexhaustible numbers of the spiky echinoderms, literally covering the sea floor in a carpet-like manner. What wasn’t to be found? Seaweed. The following day they descended down into the abyss and were faced with the same findings – coral gardens with hundreds of urchins (about fifteen per square meter of ocean floor) and nary a trace of seaweed. Accustomed to this pattern of abundant urchins and the absence of algae, the team was thrown through a loop on their third dive. A thick bed of Sargassum seaweed swaying peacefully almost a meter high in the gentle current. No urchins anywhere to be found. Perplexed by this, the team was anxious to head out for their fourth dive in hopes of finding a clue in this mystery. Their findings were continuous. Either they found Sargassum beds or blankets of urchins, but never in coexistence. They conducted a total of eleven dives in different sites around Rapa and were consistently faced with this riddle. What gives? Most likely water movement. The urchins probably have difficulty navigating through the lush beds that wave in the current, so they stick to the coral-filled barrens of the deep. Really thought provoking. Maybe it’s some strange rivalry that goes way back between the two specimens, but I’m going to lean towards that whole “water movement” hypothesis. 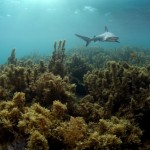 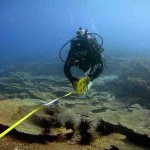