The MASNA Pioneer award recognizes the foundational contributions of scientists, conservationists, industry and trade practitioners who have contributed immensely to what we perceive as today’s common knowledge.

These early pioneers explored their worlds in ways that others at the time could not imagine. Their significant accomplishments served to uplift others following in their footsteps, often through mentoring.

The 2018 MASNA Pioneer Award for Science goes to Dr. John “Jack” E. Randall. Jack was born May 22, 1924 and today is 94 years young. He spent his early years growing up in California where he spent a lot of time on the ocean. 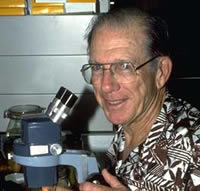 Aquariums were also a part of his early experiences, first with freshwater fishes and later marine fishes. He sailed his own boat to Hawaii in 1950 and began his long and illustrious career as an ichthyologist taking him to coral reefs around the world.

Jack has recently completed his memoirs and they are awaiting publication. Dr. Bruce Carlson, who spoke at the MACNA 2018 banquet on Jack’s behalf, has read the entire manuscript and says “it is filled with adventures at sea, a lifetime of discoveries, as well as many near-death experiences.”

Jack’s keen observations and research led him to unravel the mystery of fish poisoning or ciguatera; to recognize many new examples of mimicry among reef fishes, and to sort out many instances of sexual dimorphism especially many cases where males and females were described as different species.

Jack has also been a mentor to many younger ichthyologists notably Gerald Allen, and Richard Pyle and he co-authored the description of these fabulous new pygmy angelfishes with Richard. And not to be missed, an entire genus was named in Jack’s honor for the black nosed butterflyfish: Johnrandallia nigrirostris.

Bruce had the honor of presenting Jack with his award on Saturday Sept 1, 2018 at Jack’s home in Kaneohe, Hawaii. Jack asked Bruce to include his wife Helen in the photo because in Jack’s words “she has been a major factor in my success. She reviews my manuscripts and has publications of her own…including a revision of Dascyllus with Jerry Allen…and several with me.”

The 2018 MASNA Pioneer Award for Industry goes to Walt Smith. Walt was recognized for his early work in establishing sustainable collecting methods for hand caught fish, corals and live rock from Tonga and Fiji. Through his company, Walt Smith International, he also established some of the first aquaculturing techniques for corals in their native habitat, replanting reefs and developing training programs for local villagers. 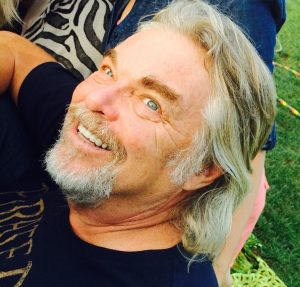 Walt continued his lifelong aquatic journey in 1972 with a successful wholesale selection service based in Los Angeles. He had previously been involved with importing fish directly, both from Florida and the Pacific. In 1989 Walt moved his family to Tonga, where he setup a collection station focussing on hand caught fish and corals from Tonga and Samoa.

Fast forward to 1995, Walt and family were invited to bring their aquatic best practices to Fiji where Walt Smith International established hand caught collecting stations and performed regional re-exporting for the South Pacific. In 1998 Walt setup the first live rock holding and curing systems using raceways and spray bars. Fiji rock would become the go to choice for hobbyists world-wide.

With the growing demand for coral, Walt established one of the first aquaculturing systems for corals. He also trained many individuals who went on to implement coral culture in other countries. He continued to expand his culturing techniques and best practices for both corals and live rock.

Walt has been a leading contributor in the ornamental marine market while also encouraging education and adherence to standards. He served as a board member and consultant for the Marine Aquarium Council. Students from the University of South Pacific are provided lab space and hands on experience with marine ornamentals. Walt also was responsible for employing hundreds of Fijians, supporting local villages and educating them in sustainable practices.

The focus on sustainability led to the formation of Aquaculture Development for the Environment (ADE) in 2012, a non-profit where techniques that were developed in culturing corals for collectors could be used to help re-establish reefs in Fiji and elsewhere. Through continued training and support for local villages to perform reef restoration projects, ADE continues the legacy established by Walt. Donations to support ADE can be made through www.adeproject.org.

Walt’s longtime friend, Bob Fenner, presented Walt with the MASNA Pioneer Award for Industry during the banquet at MACNA 2018 in Las Vegas. He was joined onstage by his lifetime partner Deb Smith, who is the namesake of the Fijian endemic blue velvet angelfish, Centropyge deborae.