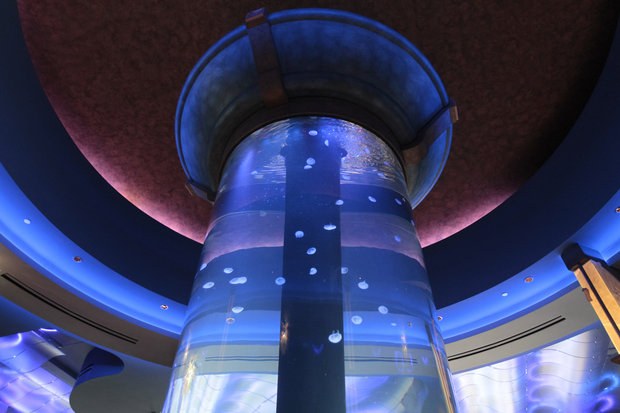 The massive aquarium stands 18-feet high and is 6-feet in diameter.


The enormous aquarium will measure 18-feet tall by 6-feet in diameter and will house 300 moon jellyfish when fully stocked in a couple weeks.

The tank is housed in the restaurant called the Coba Costina situated in the Idle Hour Shopping Center in Lexington, KY and is owned by father and son Phil and Lee Greer.

They came up with the idea while visiting Caesars Palace in Las Vegas, which contained a large, cylindrical jellyfish tank.  After seeing the jelly aquarium the ideas started churning as they wanted one for their new restaurant. However, they decided to double its size, Kentucky-style.

Moon jellyfish swimming in their new 3000-gallon aquarium in the Coba Cocina restaurant.

Lee Greer recalled saying “This is great, but it’s not big enough by Kentucky standards. What if we double the bet and make it twice the size?” And that’s exactly what they did.

They hired Jeff Turner of Reef Aquarium Design based out of Florida to design the system for them.  Incidentally, one of Jeff’s credentials is his firm designed and installed the Indo-Pacific system for the Smithsonian Institute’s Natural History Museum in Washington, DC about five years ago.  The system is designed as a kreisel, slowly circulating the water in a circular pattern to keep the jellyfish suspended at all levels of the tank.

All of the moon jellies housed in this aquarium are captive bred, as breeding them is relatively straight forward – and it reduces harvesting pressures on wild populations.

If you are in Lexington, KY, and are a jellyfish lover, definitely stop by this restaurant after the 18th and check it out!