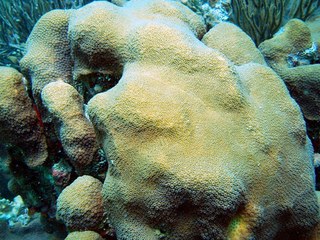 Helmle writes: “Massive reef-building corals are not as susceptible to declines in Ωarag [aragonite saturation state] as demonstrated by laboratory experiments; local processes, such as high seasonal variation in Ωarag in the Florida Keys, may be temporarily enabling these corals to maintain their historical rates of calcification; the role of Ωarag in controlling calcification is masked amidst considerable natural inter-annual variability; or the actual in situ reef-site carbonate chemistry is decoupled from the oceanic values, which could occur as a result of shifts in benthic community metabolism, mineral buffering and/or coastal biogeochemical processes.”

It’s good to know some corals (albeit naturally slower-growing types) have demonstrated tolerance to climate change.  Unfortunately, the same resiliency is not exhibited by the fast reef-building corals such as Acropora, Pocillopora, and Porites.