Media Review: A Review of the Literature

Since I last wrote in this column (Octber 2003), much has appeared in the scientific literature. As you can see by the several pages of references below, many of these would be worthy of further description. However, in this month’s column I would like to briefly review a paper that appeared back in 2001. This will then be followed with a more recent publication by the same authors that carries through on the same theme, mainly the effects of water flow on the ability of coral to withstand and recover from coral bleaching brought on by high light and high water temperature. 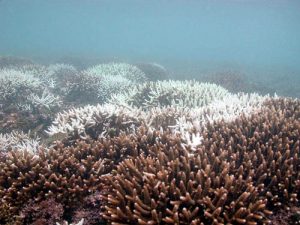 During the coral bleaching of 1998 that affected large portions of the western Pacific from Palau up to Okinawa, Japan, many observers noted the patchy distribution of the event. It was observed that the same species of coral would bleach on one reef but not on an adjacent reef. In Palau, it was noted that corals in channels with high water flow exhibited far less bleaching than in areas with lower flow rates (Delbeek, pers. obs. 1999). In recent years, there has been a push by some authors in the aquarium hobby to advocate running reef aquariums at higher temperatures. One of the pieces of evidence used to justify these levels was the occurrence of corals on reef flat areas that get quite warm and receive a lot of light, which appear to do survive just fine. What was missing from this example, however, was water flow; these areas may have been subjected to strong tidal flows or ocean surges. The following two articles support the observation that good water flow is an essential component in a successful reef aquarium that houses a lot SPS corals such as Acropora and may help to prevent coral bleaching brought on by increased water temperatures and light levels.

In this study, several fragments of Acropora digitifera were collected in southern Japan from an area that had a high average flow rate and had resisted the coral bleaching event of 1998. Keep in mind that these corals had already survived one bleaching event and may represent corals with a strain of zooxanthellae better adapted to high temperatures. 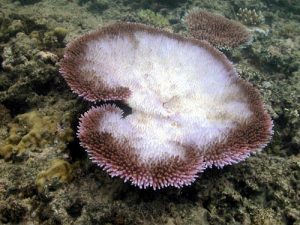 The fragments were placed in small flumes in an outdoor tank of running seawater. All of these fragments were submitted to 95% natural PAR levels and varying temperatures. Those fragments subjected to flow rates of 50-70 cm/s (created by Rei-Sea powerheads) and natural temperatures ranging from 26.22 oC (79 oF) to 33.65 oC (93 oF) exhibited no bleaching over a two week period, however, those subjected to those same temperatures but with <3 cm/s water flow exhibited 100% bleaching within 8 days. In the control group, where temperatures ranged from 26.64 oC (80 oF) to 29.74 oC (86 oF), no bleaching appeared after two weeks under either flow regime and under the same light level. It was hypothesized that the reason for this had to do with mass transfer rates. The mass transfer (the diffusion of substances across a boundary layer, in this case the cell membrane) of gases and metabolites is required for organisms to survive, especially when submerged, as are marine organisms. This mass transfer must occur across a boundary layer made up of still water that surrounds every surface underwater. Water flowing across marine organisms causes forces to act upon this boundary layer. As a result, organisms in low-flow environments tend to have thicker boundary layers than organisms in high-flow environments. The thinner the boundary layer, the easier it is for diffusion to take place. One of the theories of coral bleaching states that coral bleaching begins when CO2 fixation under high temperature and irradiance begins to break down and toxic oxygen radicals and their derivatives begin to accumulate in the zooxanthellae. This leads to damaged pigments and proteins that results in to the inactivation of photosynthesis and brings about bleaching. The removal of these derivatives by diffusion before they can cause damage could be the result of high water flows that compress the boundary layer, enhance diffusion rates, and hence, mass transfer rates.

During the summer of 2002 the authors collected and prepared several fragments of Stylophora pistillata from the Ryukyu Islands, Japan. These fragments were kept for four months at low flow conditions (< 3 cm/s) and low PAR (< 300 μmol/m2/s). To induce bleaching small segments of each fragment were subjected to PAR levels of 1500 μmol/m2/s for six hours using fiber optics attached to a 150 W lamp. The temperature was maintained at 27 oC (81 oF). After bleaching occurred, three samples were immediately frozen and then analyzed for chlorophyll a and c2 concentrations and zooxanthellae numbers were counted and recorded as week 0. The rest of the samples (along with unbleached controls) were placed into the same type of flumes as the previous paper and subjected to two different flow rates (<3 cm/s and 20 cm/s). Samples were then taken at weeks 5, 6 and 7, and measurements were made as in week 0. Note: this study only examined the effects of increased light NOT temperature increases.

The above results suggest that coral in the high water flows recover more quickly from light induced bleaching by first photo acclimating to high light by increasing chlorophyll a concentration and then by increasing zooxanthellae number. As the number of zooxanthellae increases, shading of algal cells begins and so the zooxanthellae begin to show a decrease in chlorophyll content to photoacclimate to the lower light caused by the shading. The drop in chlorophyll c2 concentration has also been observed in other studies of coral bleaching and appears to be a reaction to high light levels. In this case, the zooxanthellae that began to populate the bleached areas were thought to come from adjacent, unbleached areas as opposed to the reproduction of remnant zooxanthellae in the damaged tissue.

The results of these two studies point to the possibility that the ability to withstand and recover from coral bleaching brought on by high light and/or high water temperatures involves processes that are driven by mass-transfer- limited processes, since strong water flow directly affects the rate of mass- transfer. For the aquarist the implications of these studies is clear, moderate to strong water motion can be a valuable tool in preventing bleaching in their systems due to higher light levels and/or water temperatures. Indeed, as the second study shows, increased water flow can also lead to a more rapid recovery from light induced bleaching, and most likely temperature induced bleaching as well.

There are several studies in the hobbyist literature that have attempted to look at water flow in home aquaria, the clear result of these studies was that many of the tanks examined have water flows closer to lagoon environments than outer reef areas (see Riddle, 1996 and Harker 1998). To be sure, the advent of more efficient water motion devices over the last 5 years probably means that it is time for another evaluation of water motion in home aquaria.

Using the information from the previous two articles there a few recommendations that hobbyists can take away that will help prevent or deal with coral bleaching. Keep in mind that the above studies only dealt with one SPS coral, so it is most likely that SPS corals would benefit the most from the following suggestions:

As a final comment I would just like to remind everyone that benefits of increased water flow are not limited to just protection or recovery from coral bleaching but also benefits corals by increasing photosynthesis rates, growth/calcification, phosphate uptake and the generation of UV protectant compounds. Therefore, water flow remains one of the critical aspects of reef aquarium husbandry and should always be a major consideration whenever designing a new system.

The following are citations for some of the articles that might also be of interest to aquarists, which were published in the summer and fall of 2003.