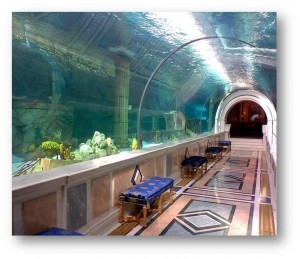 Have you ever wanted a 500,000 gallon shark tank complete with a huge acrylic tunnel in your living room? Perhaps something a little smaller like a giant reef tank on board your mega yacht?  While these immense and hugely expensive aquariums sound like fantasy, they are in fact very real and thriving aquatic systems in the Middle East! I had the pleasure of designing and managing many such private super-aquariums during my tenure as Director of Operations and Corporate Curator from 2004 to 2009 at Issham Aquatics , one of the Middle East’s largest public and commercial aquarium construction and management company. 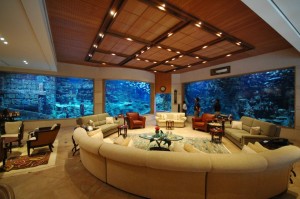 A 150,000 gallon Mega Home Aquarium in the Middle East. Photo by Isshamaqua.com

These mega home aquariums are designed, built and staffed better than many modern public aquariums. They use the highest quality construction materials and are even staffed by experienced “western” marine biologists.  One of the largest residential aquariums on the planet is over 500,000 gallons in volume and is located in a royal palace in the middle of the Saudi desert, a thousand miles from any source of saltwater. The aquarium houses  dozens of sharks and rays;  some of which were captive bred at Issham’s headquarters and R&D facility on the Red Sea in Jeddah, Saudi Arabia. The immense aquarium took over 2 years to complete and is staffed by seven full-time aquarists and LSS techs as well as an experienced aquarium curator from England.

One of my personal favorite shopping trips included chartering an ex-military Antanov-12 cargo plane to ferry adult Sand Tiger Sharks  to a private aquarium in the middle of the desert. 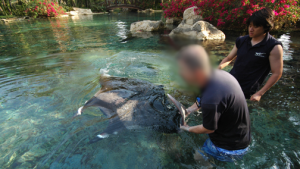 A Manta Ray being introduced into a 500,000 gallon Residential Saltwater Lagoon. Photo by Isshamaqua.com

How does one stock a 500,000 gallon aquarium? As it happens, prior to Saudi Arabia’s  export ban on ornamental marine fish in 2007/8, Issham Aquatics was the largest collector and exporter of Red Sea fish in the world. After the ban took place, the company’s collecting efforts focused on supplying  animals for their massive public and private aquarium construction projects throughout the region. Surprisingly, many of the clients who I dealt with had a great interest in the ocean and marine life and were genuinely passionate about aquariums. Dealing with these clients was the most enjoyable and I was often tasked with collecting extremely rare animals like the Bowmouth Guitar Fish Rhina ancylostoma. At the time, there were only a few known Bowmouth Guitar Fish  specimens in captivity and I had 3 of them!  I am happy to say that all 3 are still growing and doing well to this day. 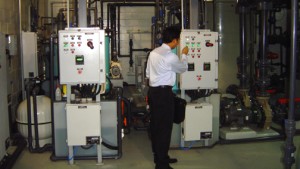 Giving full details of these fantasy-like mega aquariums and the stories behind them would take an entire novel, but I will endeavor to provide a little more insight on a few of my favorite projects over the course of the next couple of blogs.