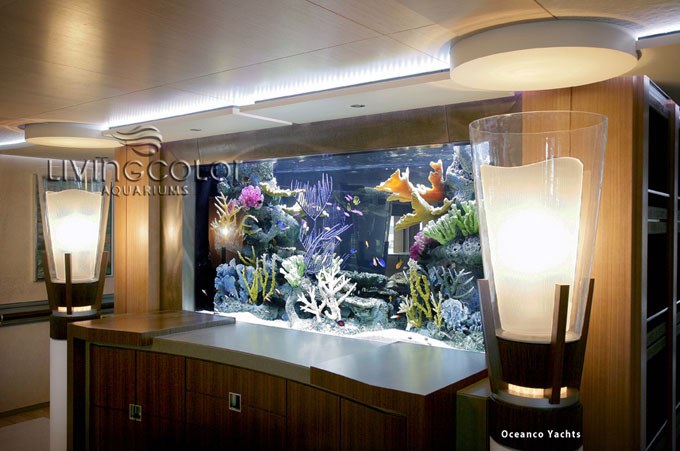 A Sea on the Seas

(The text below is provided by Living Color)

Imagine cruising the Caribbean on your luxury yacht and being able to enjoy watching an exact replica of the region’s exotic marine life in your ship board custom aquarium! Or, if your tastes lie in other underwater areas, how about a 2,000-gallon aquarium habitat stocked with all the sea life that you might expect to see in the Indian Ocean, South Pacific or North Atlantic?

There are only a handful of ship-board aquariums in the world and Living Color has built most them. They recently designed and built an impressive 700 gallon custom acrylic aquarium exhibit for this impressive Oceanco Mega Yacht. The aquarium can be viewed from two sides and has curved acrylic windows that follow the sleek lines of the yacht’s interior.

Using sophisticated 3D CAD software, our design and engineering team precisely rendered the aquarium and associated filtration in exacting detail.  The aquarium and equipment had to be carefully positioned to ensure that the heavy load did not affect the yacht’s performance. Several  unique items that must be considered when  creating large aquariums for ocean going vessels. Modifications include increasing the acrylic thickness to withstand the load and changing pressures of  yachts sailing on the roughest seas and integrating  water tight canopies and covers to prevent the aquarium and filtration water from spilling during harsh conditions.

A water-tight lid is a requirement on the high seas.

Live reef tanks are beautiful, but Living Color’s easily cleaned museum-quality artificial coral reefs have a unique beauty all their own. The ship’s owners are rarely on board and the crew are not experienced aquarists with little time to dedicate to aquarium care.  As such, the aquarium to be designed  as low maintenance, efficient and user friendly as possible so a Living Color Aquarium was the logical choice.  With a 24 year history of creating award-winning aquariums, the owners were confident that they would get an amazing display tank.

After the aquarium, artificial reef and LSS were built, our installation team traveled to the Netherlands to install and commission the aquarium.  Living Color’s Head LSS Designer sailed on the yacht during sea trials to ensure that the aquarium would be able to stand up to the rigors of sea.