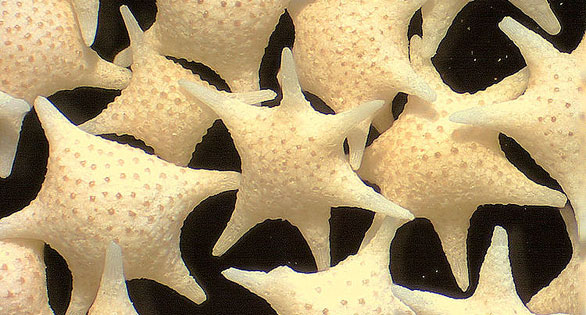 Most are smaller than a pinhead and are largely unseen by humans who don’t have a magnifying lens in hand, but foraminiferans or “forams” are found in countless numbers on the world’s reefs, often forming part of the matrix of sandy substrate that can fuse into hard areas of calcium carbonate. Amoeba-like organisms that typically secrete a calcium test or shell to protect their soft bodies, forams are estimated to generate some 43 million tons of reef carbonates each year. Their appearance varies tremendously over an estimated 275,000 species, most all marine bottomdwellers that measure less than 1 mm in diameter. Some species grow larger, including the Red Tree Foram, Holotrema rubrum, which can hitchhike into reef aquaria on live rock (Shimek, 2004). Now marine scientists are fearful that the entire class of foraminiferans may be among the first group of organisms to disappear as ocean waters become more acidic. In fact, forams as a class may be extinct by the year 2100 say a team of scientists from the Australian Institute of Marine Science (AIMS). Dr. Sven Uthicke, Australian Institute of Marine Science (AIMS). “Forams–or foraminifera –are much like an amoeba with a shell,” explains Dr. Sven Uthicke, lead author of a study which was published in May in the journal Scientific Reports, an online journal of Nature. “As CO2 levels increase, our oceans will become more acidic, making it more difficult for these small marine creatures to form the shells they need to survive. “These simple organisms are vulnerable to increasing ocean acidification as they lack the complexity and energy reserves of other skeleton-based marine creatures, like corals and sea urchins,” says Uthicke. Volcanic Vents in New Guinea Provide Clues “We conducted a study in Papua New Guinea, where subsurface volcanic activity has caused naturally-occurring CO2 to continuously bubble up from the seabed. These “CO2 seeps” have created localised changes to seawater acidity similar to those expected throughout the world’s oceans by the end of this century if CO2 emissions continue unabated. “These seeps provide important clues to what the marine world might look like in the future,” he says. “Our analysis of samples collected more than half a kilometre from these seeps revealed healthy and diverse communities of forams, similar to those you would find on the Great Barrier Reef. However, the samples we took closer to the seeps, where CO2 concentrations were higher, showed a very different picture MORE: Micro Reef Builders in Their Final Century?