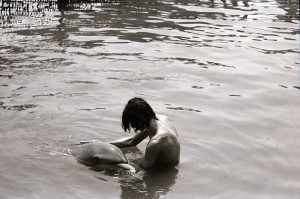 Well this brings a whole new meaning to “Fifty Shades of Grey”. You know the age-old story – boy meets dolphin, dolphin gets drunk and flirty, dolphin makes wanton advances on boy, boy tries to resist but alas gives in to her persistent, salacious passes, boy falls for dolphin and embarks on a summer long romantic relationship full of “consensual” coitus with dolphin. Happens all the time. So, let’s file this one under in the “Seriously Disturbing Fetishes” category, or perhaps “Just Plain Wrong”.

Meet Malcom Brenner, 63, who claims that at the age of 18, he became romantically involved with a captive bottlenose dolphin by the name of Dolly after the two “met” at a Florida amusement park. In 1970, Brenner encountered the porpoise at Floridaland (now exanimate) as a freelance photographer taking pictures for a children’s book, of all things. After Floridaland closed its doors in 1971, Dolly was relocated and died nine months later. To this day, forty plus years later, he maintains that the torrid affair was not only consensual, but an exemplary romance as opposed to an act of bestiality.

Miami-based documentarians Kareem Tabsch and Joey Daoud reached out to Brenner after he published “Wet Goddess”, a novel that debuted in 2011 in which he chronicles his slippery escapades with Dolly.

“I wrote this book for dolphins because we are mistreating these animals by keeping them in captivity,” Brenner told the Huffington Post. “We should be attempting to communicate with them and treating them with more respect and dignity.” – How gallant.

The filmmakers opted to only interview Brenner as opposed to sex experts or animal rights activists in order to allow him to tell his story in full, avoiding reconfirmation of what we’re all already thinking – this is truly sick. The provocative short documentary focuses solely on interviewing the admitted zoophile, reminiscing their courtship and copulation. January 25, 2015, “Dolphin Lover” made its debut at Slamdance Film Festival in Park City, Utah.

While the film itself takes an unbiased and non-judgemental approach – it raises a lot of flags (and perhaps a good deal of outrage). Really, the whole production is a slippery slope of morality, animal rights and judgement of sanity. I can’t comment candidly on the film as I haven’t seen it, yet there are so many facets here fluttering at the surface that need to be taken into consideration! Mainly, how does one confirm this interspecies interaction was “consensual”? We’re forced to question Brenner’s mental state – is this a legitimate interaction? A fallacy? The fact that Dolly is no longer able to offer her say in the matter is quite irrelevant, but why maintain such a ludicrous story with such tenacity for decades?

The film is uncomfortable. This topic is uncomfortable. Writing this was uncomfortable. Just watching this promos, satire aside, you’re left considering the actual subject at hand. “Dolphin Lover” will be making the rounds at various film festivals before laying down and presenting the feature for online release. In case you’re curious (I was), Brenner is twice married (twice divorced) and yes, he is a father. His daughter designed the cover for his book.