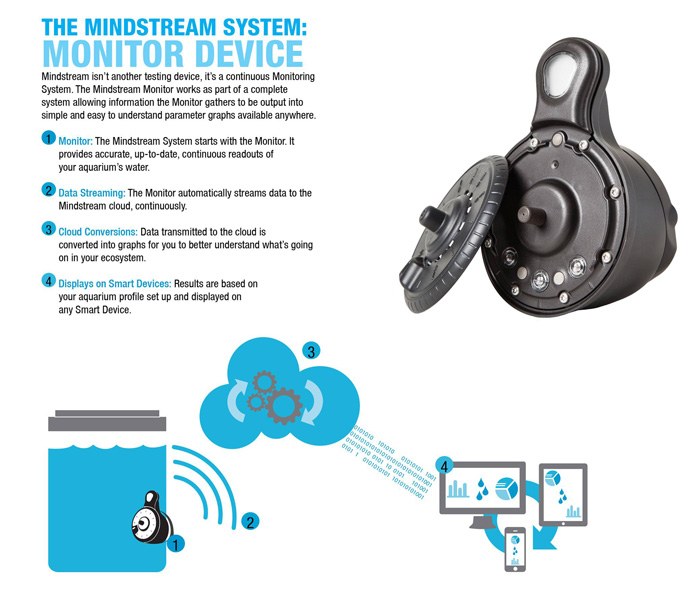 The Mindstream is one of those products that represents a potential paradigm shift.  Aquarists currently tests aquarium parameters with chemical reagents or test strips, and they have to manually test each parameter one at a time.  The Mindstream does away with reagents, test strips, and manual testing.  It is a total aquarium monitoring system that automatically collects data on all the popularly tested water parameters every 15 minutes and wirelessly logs this data online “in the cloud.”  Users will have free access to this data (in other words, there will be no monthly charge).

The Mindstream uses a patent-pending fluorescing optical system to measure the concentrations of multiple parameters including pH, alkalinity, NH3, NH4, NO2, NO3, Ca, Mg, K, O2, and CO2, with more parameters (like PO4) said to be in the works.  The Mindstream also measures temperature, salinity/TDS, and conductivity.  While the Mindstream monitoring is automatic, the device requires aquarist to replace the test foil every 90 days.

As a stand-alone monitoring system, the Mindstream is exciting.  But they also have plans to integrate their device with other aquarium products (e.g. controllers) to provide a complete monitoring and control system.

Currently the product is in closed beta with no official price and release.  Specifications may also change.  Mindstream has suggested on their facebook page that they will retail for “under $600.”  Advanced Aquarist will provide more information as they become available.

Mindstream has regularly posted introductory information about their upcoming monitoring system on their facebook page.  We knew our readers would want more details about how the Mindstream works, and they happily obliged by supplying Advanced Aquarist the first in-depth look at the technology behind their monitoring system.

Check back with Advanced Aquarist and follow Mindstream’s facebook page to keep up to date with its development.

How does it work?

The Mindstream Aquarium Monitoring System was developed by a PhD chemist and electrical engineer with a large portfolio of inventions and patents. The technology has been adapted from the biomedical field and utilizes fluorescent ionophores developed for each chemical parameter being measured. These complex molecules become more or less efficient in converting light of one wavelength to another, based on ion concentrations. 15 pending patents protect the Mindstream Monitor technology. Several other patents protect the many years of development behind the dye molecules.

Ten sensor foils are placed on the rotating sensor disc, where they are exposed to pulses of ultraviolet light. The resulting fluorescence is measured by precision optics and electronic circuitry and sent to the cloud where complex algorithms calculate the chemical level. 24 optical measurements per sensor on the disc are performed on each reading assuring the integrity of the measurement. In the rare event the optical scan detects fowling, an alert will be sent and a gentle cleansing will solve the problem.

Each disc containing the sensor foils undergoes a precision calibration process prior to shipment and is identified with an RFID tag. Once you install the disc on your Monitor, it is matched to our cloud database and the calibration is enabled. Ongoing algorithms continue the calibration throughout the 90 day life cycle of the disc.

Two radios reside in the Monitor device: one connects the unit via Wi-Fi to the cloud, the second will connect to local accessory devices, allowing them to be controlled via the Mindstream System. We’ll be seeking partners to incorporate our chip into their device.

The Mindstream sensor foils fluorescing after being exposed to an excitation light source. Measuring the fluorescence intensity indicates the level of the chemical concentration.

Test strips and re-agents are time consuming, subjective and have many different variables.

Electrodes are expensive, difficult to aggregate and require troublesome calibration.