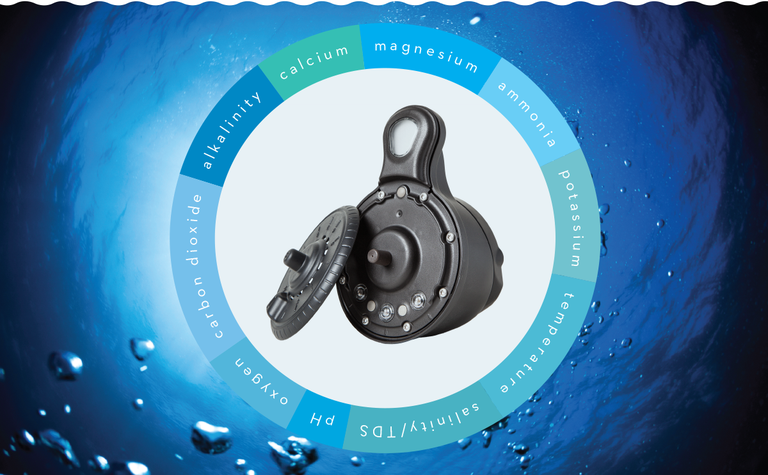 Step Ahead Innovations, Inc., innovators of the revolutionary MindStream aquarium water monitoring system, today announced its much anticipated public unveiling.  After years of research, development, and testing, avid aquarists and general supporters alike can help bring the MindStream monitor (anticipated MSRP $700-900) to market and be among the first to receive a monitor of their own for just $495 via its Kickstarter campaign.

“We’re thrilled with the prelaunch demand for the Mind Stream monitor, and our testing results have been very positive,” said Step Ahead Innovations, Inc. founder James Clark, an avid aquarist.  “We have invested an incredible amount of time and care to ensure that when we launched, this product would be accurate, reliable, and easy to use, and I feel confident that the monitor we’ve revealed today will exceed every expectation.  We are excited to introduce our product to backers and begin this Kickstarter campaign that will allow us to finalize testing, purchase materials, and set up manufacturing.  We eagerly look forward to the assistance of our supporters in bringing the MindStream product to market by the end of this year.”

The MindStream monitor is a highly sophisticated instrument that attaches to the inside wall of an aquarium tank by mating to a magnetized power pack on the outside of the tank.  The in-tank monitor is powered automatically via inductive technology through the tank glass, eliminating the need for wires in the tank.  Water parameter data is wirelessly uploaded every 15 minutes via Wi-Fi to the MindStream cloud.  Users can monitor the health of their tanks with any web-enabled device, and with apps for iPhone, Android, and Windows.  The device uses an inexpensive consumable disc that contains advanced chemical/fluorescent sensors that are accurate for at least 30 days.  A convenient monthly subscription service is planned for easy disc payment and delivery.

The MindStream monitor, which has been issued four U.S. patents with 10 more pending patent applications, is a dramatic improvement over current water testing methods, which typically include dip test strips, liquid test kits, in-tank electrodes, or mail-in and in-store testing.  With a total cost representing about three percent of an average salt-water aquarium, the MindStream solution is significantly less costly – and much more convenient – than traditional aquarium water testing approaches.

About Step Ahead Innovations, Inc.

Step Ahead Innovations was founded in 2012 by James Clark, a successful inventor, entrepreneur and electrical engineer, and Giuseppe Petrucci PhD, professor of chemistry at the University of Vermont with extensive experience in medical chemical sensor technology, which forms the basis for the MindStream monitor. The MindStream monitor grew out of their shared belief that aquarium enthusiasts should be freed from the burden of constant manual water testing regimens so they can relax and enjoy their healthy, beautiful fish and coral. The company has invested millions of dollars in technology research, product development, market research, system testing, patent protection, and the go-to‐market launch, which will be marked by a Kickstarter campaign starting on July 27, 2015 and ending the last day of the MACNA conference on September 6, 2015.