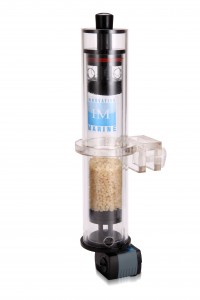 Today Innovative Marine is unveiling another product to be added to their ever expanding line of all-in-one tanks and accessories in the form of a small media reactor dubbed the MiniMax. Like the skimmer line that was released last year from IM, these reactors will be available in two different sizes which have been dubbed “Desktop,” and “Midsize.” Pricing will also be following along with the SkimMate protein skimmer line with the smaller, 150ml version fetching $99 and the larger, 350ml model retailing for $129.

Media reactors are becoming common news these days, but Innovative Marine managed to squeeze a couple of features into theirs that should make it stand out from the pack. The most notable of these features is the use of dual chambers which allow for very responsive flow control as well as making it possible to change out media by simply pulling the internal chamber out of the top. The tiny form of the MiniMax is also, of course, hard to miss. At only 2 by 2.3 inches, these miniature reactors easily fit into IM’s tank line, and they should also lend themselves well to other nano aquariums on the market.

The adjustability of the MiniMax makes it possible to run many different types of media including those that are designed to be tumbled or the many variations of chemical filtration.