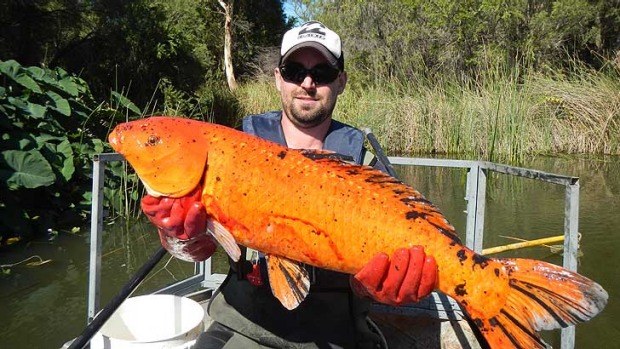 
The University of Minnesota Sea Grant and the Minnesota Aquarium Society have teamed up to offer aquarists an opportunity to donate unwanted fish to prevent them from being cast into local ecosystems.  This is a particular problem after the holidays when people are gifted fish they do not want.

The event, HabitattitudeTM Aquarium Fish and Plant Surrender, will take place on Saturday, Jan. 23 2016 in Bloomington, MN. The donated fish will be raffled off, with the proceeds going to promote “excellence in fishkeeping.”

According to Sea Grant: “HabitattitudeTM is a national public awareness campaign to help aquarium and water garden owners become part of the solution to prevent the release of aquatic fish and plants. The campaign’s logo and “don’t release” message appears on fish bags, new aquariums, brochures, and advertisements in hobbyist magazines. The campaign is a cooperative effort among the pet and water garden industries, academia, federal government, and non-profits to educate the public about the environmental hazards of releasing pets into the environment.”

Minnesota is only one of way-too-many places dealing with ecosystem problems due to aquarists dumping their livestock into local bodies of water.  For example, San Francisco established “amnesty ponds” for residents to discard their unwanted fish after one of their natural lakes was overrun with aquarium fish, forcing the city to ‘press the reset button’ by poisoning all the invasive fish so that the can reintroduce natural species back into the lake.

Never dispose livestock, substrate, and aquarium water into lakes, ocean, or waterways! It doesn’t matter if you think it’s “just water” or one little fish or algae.  ABSOLUTELY NO EXCEPTIONS!