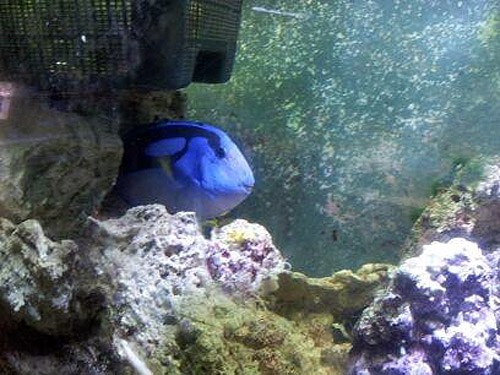 
Animal Instincts Aquarium & Pet Center (Fall River, MA): Surveillance video recorded one of the thieves walking into the fish room then bashing a 180 gallon reef display with a pipe until it cracked.  The luanatic’s rampage didn’t end there; He continued to pull away loose glass so the tank would drain empty more quickly.  In all, 40 corals and 25 fish lost their lives because of this senseless, depraved act.

But one fish defied all odds and by some miracle cheated death.

The morning after the robbery, police spotted a fish still moving on top of (now dry) live rock.  A store manager saw that it was Big Blue, the store’s 18 year old blue tang, and quickly scooped her up and placed her into another saltwater tank.  To their despair, Big Blue sank to the bottom, and it appeared that the last survivor of the terrible night would soon expire as well.

However, Big Blue had different plans. Said store owner Robert Schenck, “At the end of the day, we looked over, and son of a gun, if she wasn’t swimming around!”  The tang still has cloudy eyes and is covered in scrapes, but Schenck says Big Blue is healing well and has started to eat as his staff tries to nurse this old tang back to health.

The store is offering a $750 reward for information leading to this man’s arrest.  If you have any information, please call his cell at 774-201-1478.   Schenck says “I want to know what this guy’s problem is. To kill all these living things, you have to have some type of a mental issue … he had to be a sick individual.”

We couldn’t agree more.  We wish Big Blue a speedy recovery and hope this despicable person is brought to justice.