Misguided Ban on Fishing of Surgeonfish, Damselfish, Rabbitfish, and Parrotfish defeated in Philippines

With the Hawaii Land Board’s decision last month, the battle over the aquarium fishery in Hawaii continues. The future of what many top scientists regard as one of the most sustainable near shore fisheries in the world is uncertain. Most people in the trade and hobby are at least somewhat familiar with the issues in Hawaii, but few people recognize the real span of legislative threats to the aquarium trade and hobby. Fishers and exporters in the Philippines recently faced a similar battle with a proposal of legislation that would have been ineffective in promoting environmental sustainability, but would have threatened the livelihoods of thousands of people who work in their sustainable aquarium fisheries.

The Philippines is the epicenter of coral reef fish evolution, and therefore contains more biodiversity in reef fish species than anywhere else in the world. The nation of 7,500 islands also exports more aquarium fish than anywhere else in the world and the trade provides a livelihood for thousands of people. Export of aquarium fish is economically vital to the nation. In recent years, pushes from inside the industry have spurred initiatives, such as RVS Fish World’s extensive net training program, to ensure environmental sustainability in collection methods and improved handling practices to provide better quality to customers at final destinations.

However, while underreported, the Philippines fishery has faced many of the same legislative and regulatory challenges as Hawaii, Fiji, and Indonesia. In February, the Philippine Ornamental Fish Exporters Association (POFEA) and their constituents of fishers, shippers, and others involved in the trade defeated another proposed ban that would have had major impacts on the trade and the livelihoods that depend on it. Unlike other legislation the Philippines has faced recently, the aquarium fishery was not the intended target of the bill. This fact however made the effects no less damaging.

The bill set out to ban fishing for tangs, surgeonfish, damselfish (except clownfish), rabbitfish, and parrotfish. The ban’s intent was to prevent overfishing of herbivores that eat algae that may otherwise overgrow and outcompete coral on reefs. Unfortunately, this is a misguided strategy to protect herbivores and reefs for several reasons.

How herbivores are fished matters significantly more than whether or not they are fished. Fishing with methods and gear that destroys coral and habitat such as with dynamite, cyanide, or herding fish by breaking coral and rock is always destructive no matter what species is sought. Unfortunately, these methods are still utilized to catch food fish in Philippines and in some regions, there is evidence that they are common. While cyanide fishing for aquarium fish has largely been stomped out throughout the country with net training programs and better enforcement, the method of fishing with poison is still rampant, especially to capture grouper and other fish destined for restaurants in mainland Asia that import food fish live in an attempt to serve it as fresh as possible.

Cyanide, dynamite, and herding fish by breaking coral destroys habitat that can often take decades to recover. As coral reefs are obligatory habitats for many species, including herbivorous species, populations of reef fishes are also reduced until the habitat is restored. Therefore, legislation banning fishing for herbivores is likely to be ineffective while reefs and coral heads continue to be decimated by destructive practices. Even for the species of tangs, damselfish, rabbitfish, and parrotfish that are found in other habitats as adults, reefs act as necessary breeding and nursery grounds, and the number of individual herbivorous fish protected by a ban on fishing is far lower than what would be protected by stronger enforcement of existing laws prohibited fishing with chemicals, explosives, and other destructive methods.

Methods of take aren’t the only consideration that must be made in fishery management. Size matters when it comes to fishing. Capturing juvenile fish often has little impact on populations because they are quickly replaced by newly settled fish. Removing large numbers of large breeding adults however can have significant impacts on populations. Aquarium fisheries typically target juvenile fish and rarely capture large adults. Further, the number of fish captured in aquarium fisheries is exponentially smaller than almost any other type of fishery in the world. Because of this, the operation of most aquarium fisheries is inherently sustainable, especially in coral reef areas where small, highly fecund species of fish are targeted.

While juvenile parrotfish are targeted by aquarium fishers, the large adult size of these species limits demand. The small number that are harvested is limited almost exclusively to juvenile fish of only a few inches in length. Because of the relatively low number of parrotfish harvested by the trade, and the quick replacement on reefs due to the life stage at which the fish are harvested, the impact of the aquarium trade on parrotfish populations is statistically insignificant. This is not necessarily the case with fishing parrotfish for food. Because larger individuals of breeding size are usually taken, replacement of these fish can take years and reproduction can be curtailed during this time. Due to the potential need for management to prevent overharvesting of breeding sized adults, POFEA supports implementation of size limits and catch limits for herbivorous species.

Tangs and damselfish in particular are important fishes in the aquarium trade and outlawing their harvest would have disastrous effects on fishers and communities throughout the Philippines, not to mention economic reverberations through the entire supply chain affecting exporters, importers, distributors, retailers, and all involved in the sale of aquarium fish and aquarium products throughout the world. While aquarium fisheries exist throughout the Philippines, the places they occur are often remote, with limited capacity for employment opportunities, and few options that enjoy the high level of environmental sustainability that aquarium fishing can. The diminution of aquarium fisheries therefore often leads to a net loss both economically and ecologically.

Science questions the effectiveness of harvest bans of herbivorous species. A study from New Caledonia stated a ban would have high social costs and suggested “exclusive protection of herbivorous fish in New Caledonia is unlikely to improve coral reef resilience to large-scale climatic disturbances, especially in the lightly fished UNESCO-registered areas. More efforts towards the survey and regulation of major chronic stress factors such as mining are rather recommended.”

While POFEA opposed the blanket ban on harvest of surgeonfish, damselfish, rabbitfish, and parrotfish, the organization offered alternatives that would be more effective in conserving coral reef ecosystems and the people that rely on them. Size and catch limits, establishment of seasonal closures for specific species, and prohibitions on fishing in marine protected areas and fishery refuges are supported by POFEA, and the organization has offered to assist legislators in crafting legislation that promote such initiatives. POFEA also lobbied for increased government support to fishers, particularly in promoting sustainable fishing methods and reducing environmentally destructive fishing throughout the Philippines. 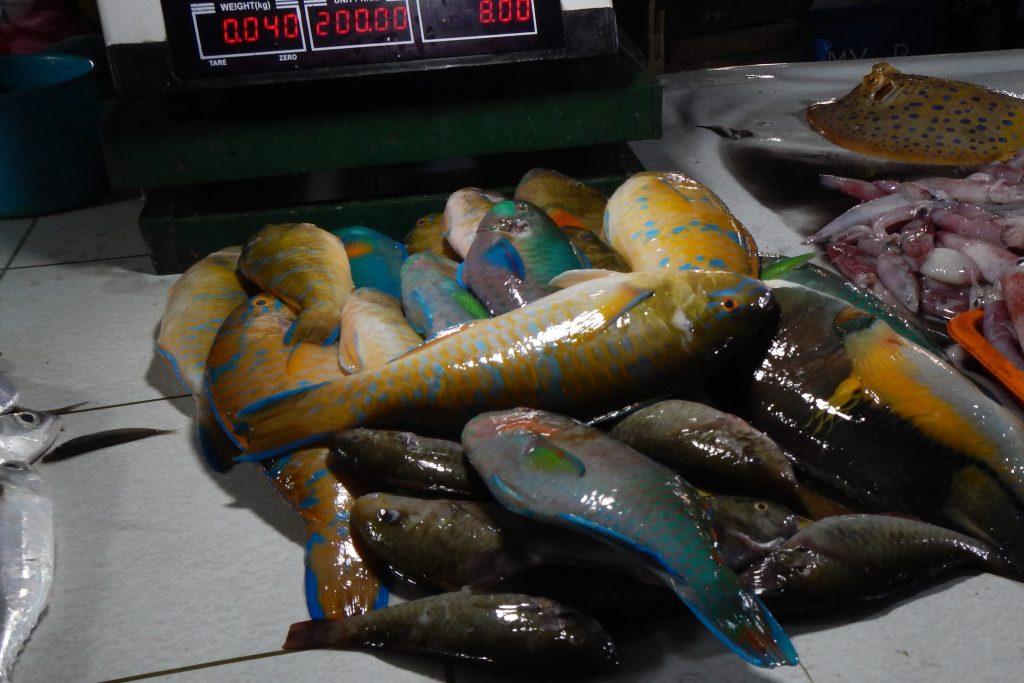 Parrotfish are a staple protein source for many people in the Philippines. Here they are for sale among squid and stingray (said to be delicious when cooked with coconut) in a market in Virac, Catanduanes, Philippines.

Legislators agreed the limited effectiveness and low conservation value of the ban did not justify the high economic and social cost. They instead opted to pursue alternatives better supported by science, such as implementing size limits and increasing focus on marine protected areas. 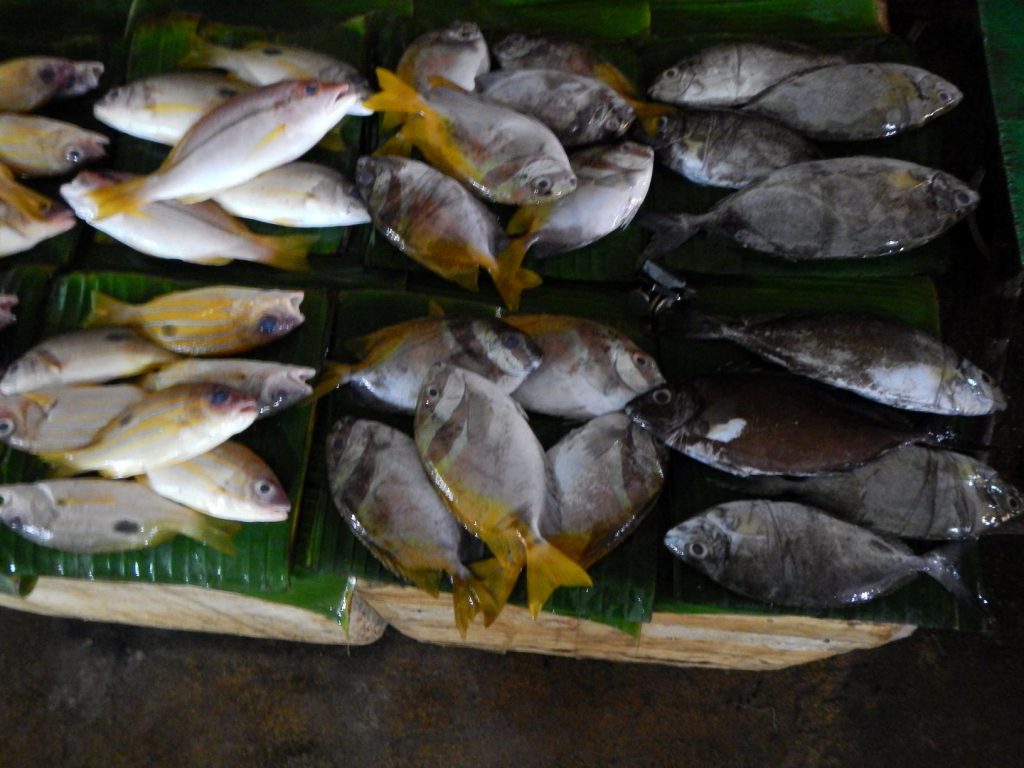 Several species of rabbitfish are commonly sold as foodfish in markets in the Philippines. Proposed legislation would have banned their collection, both for food and aquariums.

For now, the hobby and local fishers will continue to benefit from the sustainable harvest of surgeonfish, rabbitfish, parrotfish, and damselfish in the Philippines thanks to the hard work and diligence of POFEA. Fortunately, Philippine legislators were willing to listen to reason. Hopefully soon, policy makers in Hawaii will follow suit and approve permits to once again be issued to fishers in the West Hawaii Fishery management area, as recommended by a 2,000 page Environmental Impact Statement and the Hawaii Department of Land and Natural Resources’ own aquatic biologists.