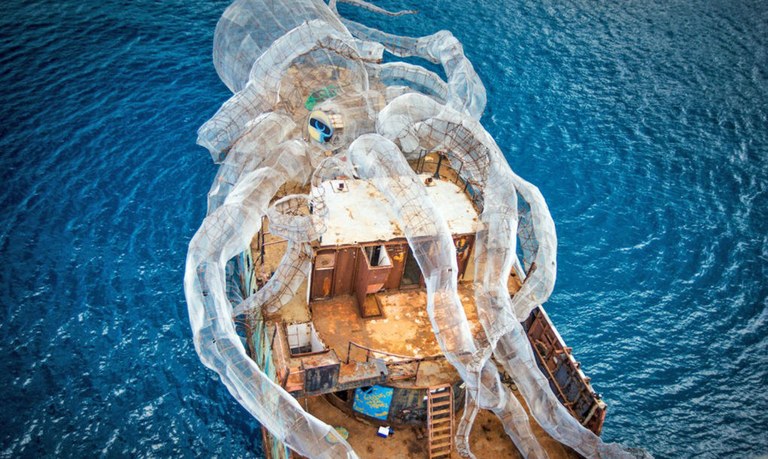 The new and improved Kodiak Queen.

The artist group Secret Samurai Productions set out on an ambititious underwater art installation like no other.  They built a monstrous octopus to completely encompass the stern of WWII warship, then dragged the completed artwork out to sea to sink to the bottom of the British Virgin Islands.

Soon divers will be able to explore the world’s largest underwater art installation titled the BVI Art Reef. The octopus was created out of metal rebar and steel.  Metal frames are often used as the foundations of artificial reefs, so just imagine the giant octopus sculpture completely encrusted with reef life!  This is a living art that will only get more incredible with time.

Beyond being an awesome work of art and a premiere dive site, the ultimate goal of BVI Art Reef is to “mobilize a global network of researchers, philanthropists and artists to solve marine health problems through the Power of Play.” The sunken ship has been outfitted with “an emerging technology called environmental DNA that will be used to collect data on the entire marine ecosystem surrounding the sunken ship.”  The wreck and octopus sculpture will be the foundation of a new artificial reef, which will provide a base for corals, sponges, and a home for fish such as threatened goliath groupers.

The photo below shows the breathtaking scope of the octopus sculpture (backhoe crane for scale).  Now imagine the whole structure fully submerged … and you swimming in and through the tentacles as you explore the wreck!

And some photos of the design and fabrication process: