The cute and photogenic need their beauty rest.  The two flapjack octopus (photo right) that became the darlings of Monterey Bay Aquarium’s Tentacles exhibit have been moved into private aquariums.

MBA has announced that the Japetella octopus and vampire squid will take their place in the public spotlight.  What the two replacements lack in cuteness they more than make up for in wonderful bizarreness.

The Japetella octopus (Japetella sp.) is a beautiful animal that lives in the midwater realm, hundreds of feet below the surface but well above the sea floor. It has chromatophores that enable it to go from see-through with spots to almost a solid orange color. MBARI’s remotely operated vehicles have observed them on video both in Monterey Bay and—even more often—on expeditions to the Gulf of California.

The vampire squid (Vampyroteuthis infernalis) is an ancient animal that lives in deep tropical and temperate waters—like the Monterey submarine canyon. Despite its sinister appearance—and its name, which means “vampire squid from hell”—this animal is a scavenger. It lives on “marine snow” that rains down from above: a mixture of poop, dead animal parts and mucus.

Interestingly enough, the vampire squid is neither really a squid nor an octopus.  It’s a sort of frankenstein with characteristics of both, and scientists have placed it in its own order: Vampyromorphida. 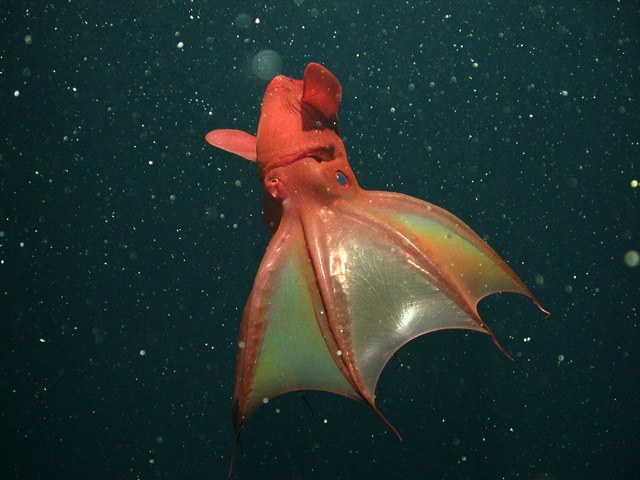