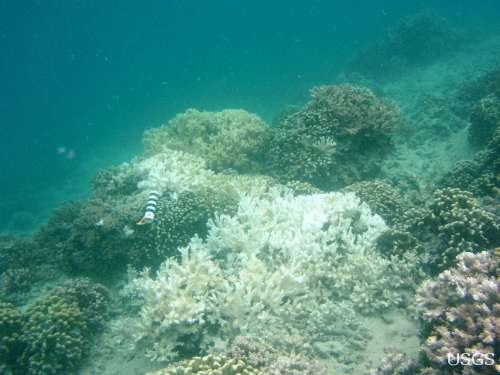 
Kāneʿohe Bay, Hawai’i is a popular recreational area (and location of an US Marine Corp base) that is currently under attack by an unknown pathogen which has killed scores of Montipora capitata.  Scientists in 2011 discovered that White Pox in the Caribbean – a disease that ravaged Acropora palmata across the Atlantic tropics for over the past decade – is actually caused by a bacterium found in human excrement released into the wild via under-treated sewage.

This invites the logical question: Is Montipora White Syndrome also an anthropogenic disease?  Are snorkelers, divers, boaters, and resorts responsible for MWS?

Read the USGS media release below

Scientists have discovered an outbreak of coral disease called Montipora White Syndrome in Kāneʿohe Bay, Oʿahu. The affected coral are of the species Montipora capitata, also known as rice coral.

Rice corals provide valuable habitat, shelter, and foraging grounds for a variety of tropical marine fish and invertebrates and provide the fundamental structure of coral reefs. Rice corals are especially important to Hawai‘i’s marine ecosystems because they are one of the more abundant coral reef species in the region.

Thus, loss of corals can have negative effects on many other reef-associated organisms. In fact, losing a coral reef is similar to losing a rainforest, with many species reliant on that ecosystem for survival.

In addition, coral reefs in Hawai‘i are an important source of tourism and other economic income (fisheries). For example, Kāneʿohe Bay, where this outbreak is concentrated, is a popular spot frequented by snorkelers, bathers, divers, boaters and fishermen.

While this particular disease outbreak seems limited to south Kāneʿohe Bay, coral diseases have the potential to be widespread, affecting large geographic regions. A prime example is the Western Atlantic and Caribbean where large tracts of coral reefs have either declined or disappeared due to diseases.

Current efforts are focused on determining the extent of the outbreak and collecting samples for laboratory analysis. On a longer term scale, all three partner organizations are trying to devise better methods to detect coral disease and determine their cause.

For the most part, the causes of coral diseases are unknown. Since biologists do not know yet precisely what is killing corals, this has complicated management of coral reef diseases. Scientists are investigating many possible causes, including host immunity, host physiology, potential infectious agents like bacteria or parasites, and environmental variables such as increased seawater temperatures associated with climate change or land-based sources of pollution.

The USGS is one of the few organizations globally that has applied biomedical tools to investigate animal diseases to coral reefs (yes, corals are animals too). The USGS’s focus in this particular outbreak is to characterize the changes seen in sick corals by looking at the whole coral (what we see with the naked eye) as well as at the cellular level (under the microscope). The USGS is also developing other laboratory tools to help enhance our understanding of coral diseases with the eventual goal of pinpointing the causes of such important diseases.

What Is Montipora White Syndrome?


Corals are basically modified anemones, which are a group of predatory — and often strikingly pretty — marine organisms related to jellyfish. Corals secrete a calcium carbonate skeleton covered by a thin layer of tissues that form the foundation of coral reefs. Montipora White Syndrome affects the rice coral and involves loss of tissues from the coral until the underlying white skeleton is revealed/exposed, hence the name “white syndrome.”

History of Outbreak and Future Risks

Based on surveys done since 2006 by the University of Hawai‘i and USGS, Montipora White Syndrome has historically been documented in coral reefs in Kāneʿohe Bay, albeit at low levels with scattered, isolated colonies affected. Large-scale outbreaks involving multiple coral colonies over a larger geographic area have only been documented since March 2011 and this recent event.

The reasons for this increase in outbreaks are presently unknown. Tissue loss diseases like white syndrome are particularly insidious in that they result in immediate loss of coral cover. Often, dead corals are then overgrown by algae, leading to permanent reduction in corals reefs and a change in the ecosystem from a coral-dominated to an algae-dominated reef.

Whether this will be the case here remains to be seen.

The USGS and partner scientists are actively involved in trying to better understand Montipora White Syndrome and other coral diseases. This will allow managers to also determine the environmental drivers of those causes, leading to better intervention and strategies to protect coral reefs.

For more information on this topic and other wildlife health related issues, visit the USGS Honolulu Field Station website.