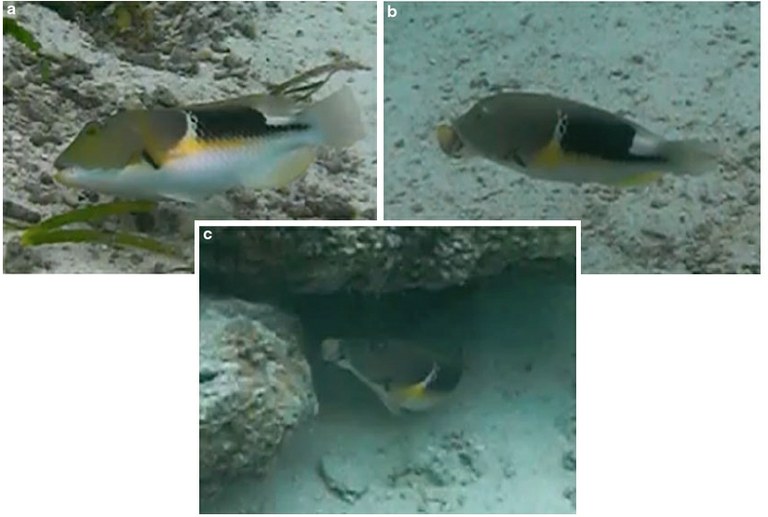 The use of tools by wrasses (Labridae). The fish fans sand to unearth the bivalve (a), takes it into its mouth, swims approximately 5 m to a rock (b), and crushes the mollusk against it (c).


Back in June we reported the first documented account of tool use in a black spot tuskfish, Choerodon schoenleinii, where this particular wrasse used a stone as an anvil to break open a cockle shell. Since then, additional reports of fish and tool use have been found in the literature (one reported in 1995 and another in 2010). In addition, wrasses have also been observed exploiting the behavior of other animals for their own benefit, which we reported about recently.

On September 20, Coral Reefs published an article titled The use of tools by wrasses (Labridae) by G. Bernardi where the researcher observed another wrasse (an orange-dotted tuskfish, Choerodon anchorago) using a stone as an anvil to break open a bivalve. The observation was very similar to the one that we previously reported for the black spot tuskfish. In the above photo the wrasse exposed the bivalve with its fins by fanning away the sand, picked it up with its mouth, and swam to a rock or a coral outcropping where it crushed the shell to open it.

According to G. Bernardi:

The use of rock as an anvil has now been described from different places in three genera of wrasses, the ancestral Choerodon, and the more derived Halichoeres and Thalassoma, which span the majority of the evolutionary history of wrasses (50 million years, Cowman et al. 2009). All observations were similar in both the use of a rock as an anvil to open or reduce the size of a bivalve to making it edible and the sideways movement of the head associated with it. The similarity of the behaviors suggests that either they emerged independently or they correspond to a deep-seated behavioral trait. If this were the case, we predict that other wrasses are likely to also use these forms of tools. The presence or absence of such a behavior in other groups of fishes will determine whether the use of a rock as an anvil is unique to wrasses or whether it can be generalized to other groups of fishes.

The report also contains a supplementary video of the wrasse’s behavior:

It will be interesting to learn if this behavior is eventually reported for other marine fish as well.