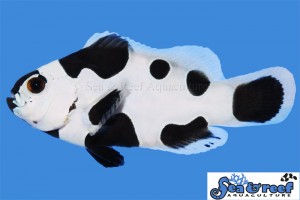 Sea & Reef was trying to create a designer Black and White DaVinci Clownfish when they accidentally created this crazy mutation.

Sea & Reef’s newest strain of clownfish is so beautiful; when the company posted about this clown earlier today, I practically fell out of my seat! This is the first time that I have been this excited about a clownfish since the introduction of the Lightning Maroon Clown. This new fish is a mix of Sea & Reef’s MochaVinci Clownfish  and a Black Ocellaris Clownfish.

The creation of this new, still-unnamed variety started with a singular unique variation found in a MochaVinci clown. Out of the strain of a DaVinci/Black Ocellaris cross, the breeders found that one offspring stood out from the rest. What set this singular specimen apart from the others? Instead of the swirly pattern commonly associated with both the DaVincis and the MochaVincis, this clown has a much more amplified white pattern, and this jet-black coloration appeared very early in its life. 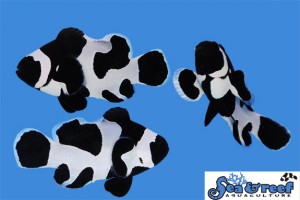 This picture is one clownfish parent taken from three different angles.

Sea & Reef initially named this parent the Black DaVinci Clownfish, believing that they had simply somehow skipped a few generations of the MochaVinci Line. But upon further observation and reflection, Sea & Reef realized that they had a potential new strain, and decided to breed this mutation with a Black Ocellaris to produce similar clowns. After a bit of time, they stumbled across something spectacular. This may very well be my new favorite designer clown! 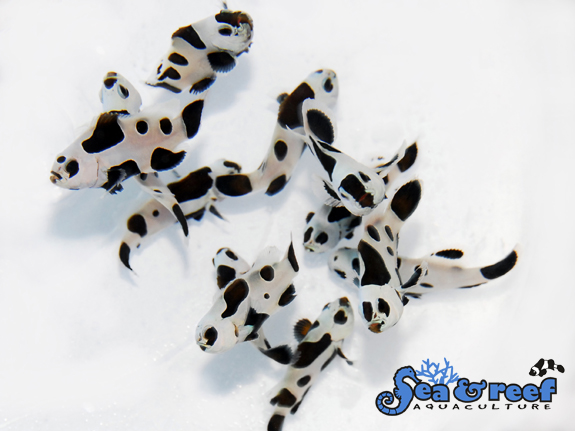 What amazing name will these clowns receive?

Sea & Reef does not want to use the name “Black DaVinci Clownfish” for this new strain; they wish to save it for a later date and another fish. So that means that these new little guys need a spectacular name that does them justice. Therefore, Sea & Reef will be holding a contest to decide their name.
This new Sea & Reef designer clown is slated for release this Autumn. For your chance at naming this ultimate designer look out for the Facebook naming contest in September here. Or email your suggestions to sales@seaandreef.com.