In my recent review of coral evolution, I made very brief mention of an undescribed soft coral which possessed the unusual feature of a stony skeleton. And so it was a pleasant surprise to see a new paper out which has formally described this species, showing it is both morphologically and genetically allied with the well-known Blue Coral Heliopora coerulea. Named Nanipora kamurai, this species differs from the Blue Coral in growing as a thin sheet of interconnected (i.e. stoloniferous) and minute (~1mm) polyps, versus the more 3-dimensional and “coral-like” shape of Heliopora. 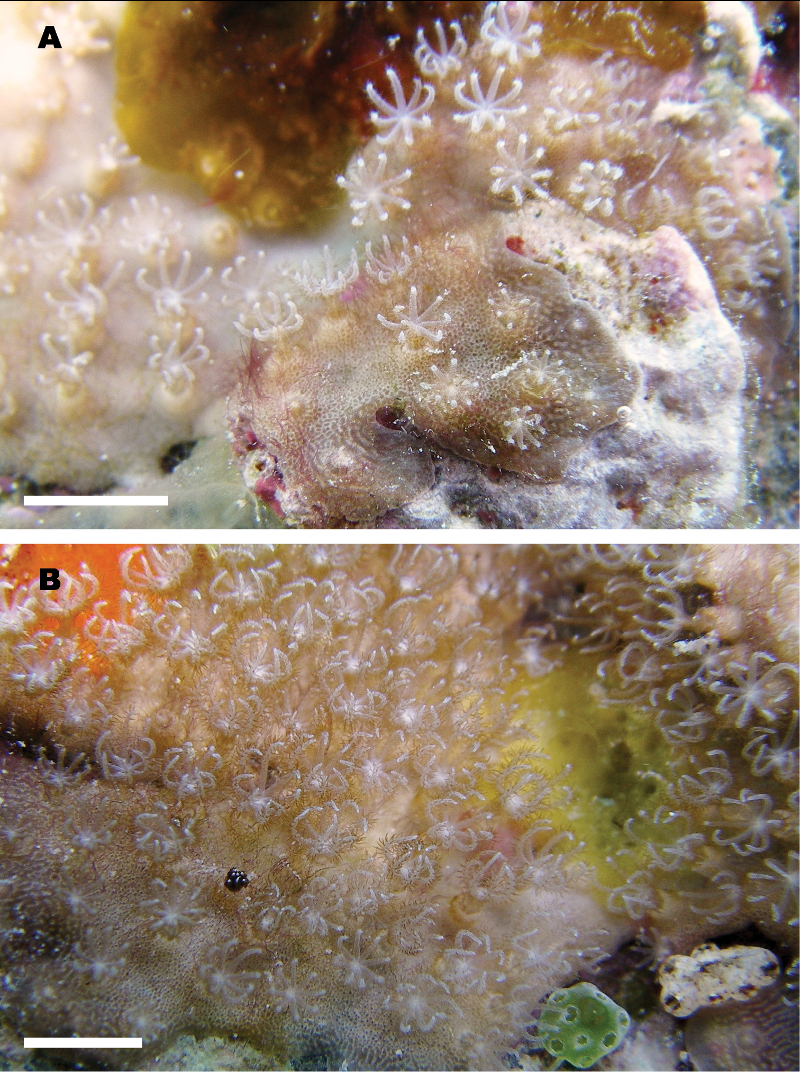 Nanipora, note there are 8 tentacles per polyp. Credit: Miyazaki & Reimer 2015

Nanipora was found on the underside of calcareous “live rock” in very shallow (<1m) waters near Okinawa, Japan. Befitting its cryptic habitat, it is azooxanthellate, and, having some of the smallest polyps in the coral world, one can’t help but wonder what it is that these miniscule polyps are feeding on. The tentacles reach up to 4mm in length, but having a gastric cavity less than a millimeter in diameter must surely limit the available prey items it can consume. The skeleton of Nanipora is a thing of microscopic beauty, with a fine reticulated patterning to the polyps which is fenestrated with thin aragonitic sheets perforated with exceptionally minute pores. The basal sheet of calcium carbonate from which the polyps arise is veined with thin tubes which enable the individual polyps to interconnect their gastic cavities via structures called “solenia”. 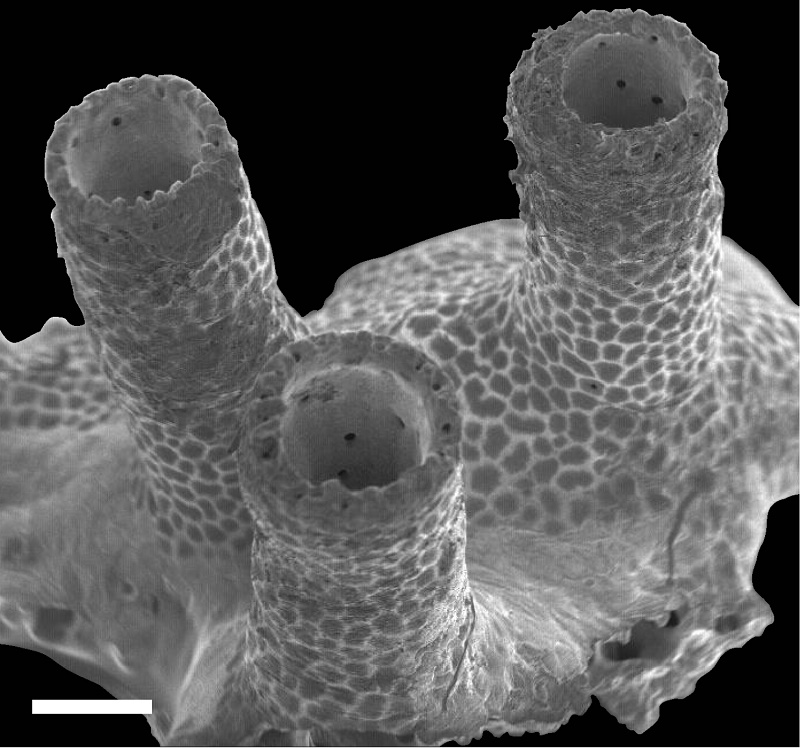 The etymology of this creature is rather amusing, deriving from the Japanese “nani”, which apparently translates as “What is this?”. The epithet kamurai is after the contemporary Okinawan be-bop jazz musician Hidefuma Kamura, whose style is regarded as a “relict” from an earlier musical era. Surely, this is one of the more whimsical allusions in scientific nomenclature.

It’s closest relatives are thought to be the handful of species classified in Epiphaxum, an obscure genus of aragonitic stoloniferous coral placed in the Family Lithotelestidae. These poorly-known species are restricted to moderately deep waters (50-400+ meters), with fossil specimens presumed to have occurred in submarine canyons. Morphologically, the two differ in subtleties of their skeletal microstructure, as well as the purported presence of sclerites in the tissue of Epiphaxum,

The phylogenetic relationship of Lithotelestidae has been somewhat contentious since its discovery. Earlier researchers considered it to belong near more traditional stoloniferous corals like Clavularia, while skeletal morphology suggested its similarities to the Helioporacea, but this new genetic data strongly argues for the latter conclusion. Interestingly, despite traditionally being treated as a highly divergent and historically ancient lineage of octocoral, recent genetic study strongly suggests that these stony soft corals are actually derived from well within the octocoral lineage, meaning that these aren’t quite as special as we thought. Still, there is something almost blasphemous about a soft coral masquerading as a stony coral. 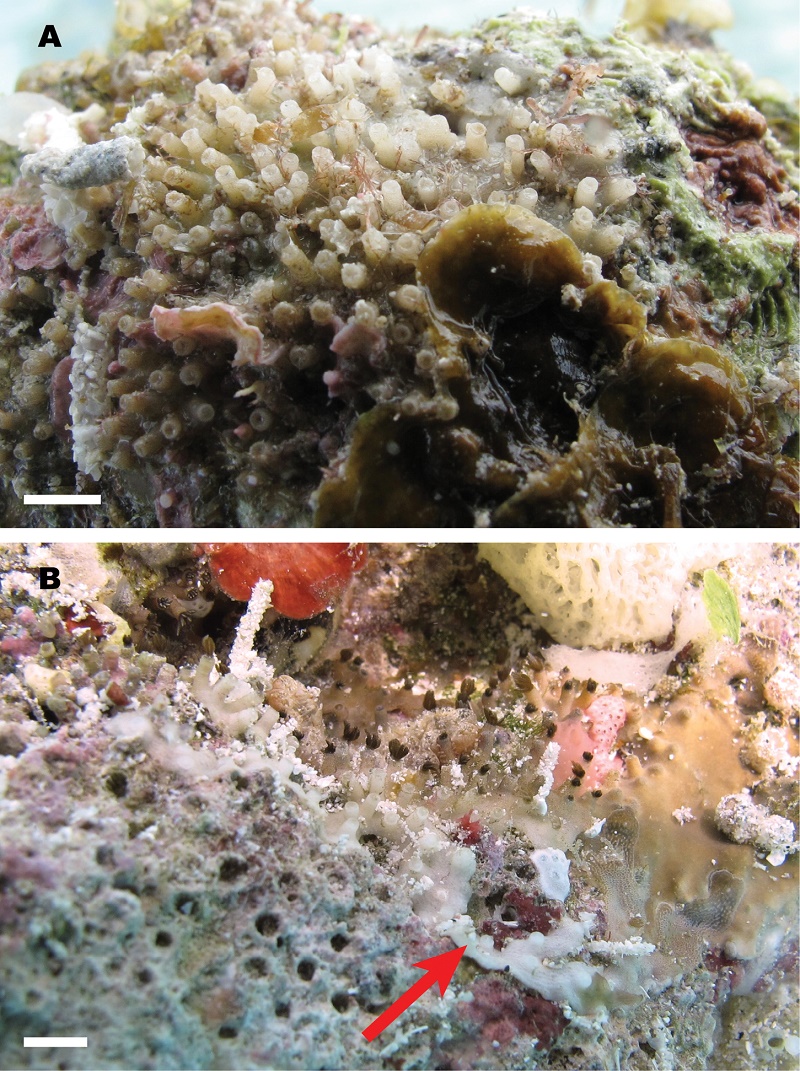 Nanipora with its polyps closed.

Nanipora, despite its mundane appearance, is truly one of the more remarkable corals in the oceans. That such a unique creature had remained undiscovered for so long while occupying such an easily surveyed habitat is almost beyond belief, and it goes to show just how little we know about the diversity of life living in our oceans. Who knows how many aquarists have this species living unobtrusively beneath some rock in their reef tank?