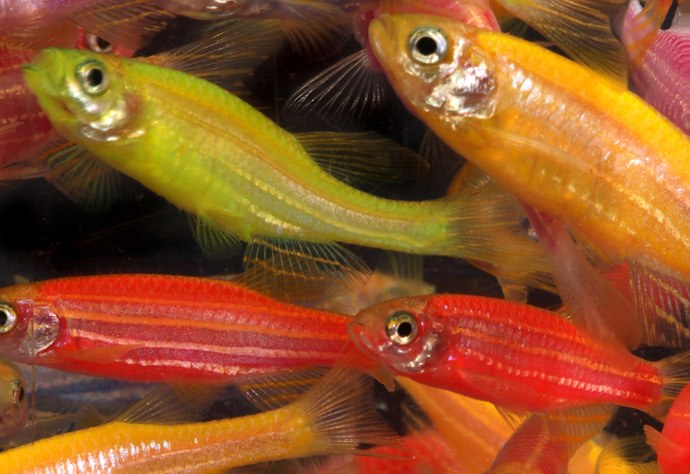 
We wanted to title this “Zebrafish think Glofish are ugly,” but the researchers found that female zebrafish were actually more attracted to the gaudy genetically modified males.  The reason why females couldn’t mate with their preferred partners is that the wild males simply would not allow it.  In other words, Glofish males were denied by wild males from hooking up with females.  Genetically modified males were sexually attractive but sexually weak.  After successive generations, the wild males were so successful at driving off Glofish males from fawning females that the Glofish were effectively made extinct.

Purdue University research found that wild-type zebrafish consistently beat out genetically modified Glofish in competition for female mates, an advantage that led to the disappearance of the transgene from the fish population over time.

The study, the first to demonstrate evolutionary outcomes in the laboratory, showed that mate competition trumps mate choice in determining natural selection.

“Mating success is actually a stronger force of evolution than survival of the fittest,” said William Muir, professor of animal sciences. “If an organism can’t get a mate, it can’t pass its genes on. In terms of evolution, whether it survives or not doesn’t matter.”

Muir and Richard Howard, professor emeritus of biology, conducted a long-term study of mating success in mixed populations of wild-type zebrafish and Glofish – zebrafish containing a transgene cloned from a sea anemone that produces a fluorescent red protein. Although female zebrafish strongly preferred the neon red males to their brown, wild-type counterparts, the females were coerced into spawning with the wild-type males who aggressively chased away their transgenic rivals.

As a result, the rate at which the red transgenic trait appeared in offspring fell rapidly over 15 generations of more than 18,500 fish and ultimately disappeared in all but one of 18 populations.

“The females didn’t get to choose,” Muir said. “The wild-type males drove away the reds and got all the mates. That’s what drove the transgene to extinction.”

Except for their mating competitiveness, wild-type males and Glofish males were similar in fitness – that is, their health, fertility and lifespan – which was unexpected since genetically modifying an organism often decreases its ability to flourish, Muir said.

“Natural selection has had billions of years to maximize an organism’s fitness for its environment,” he said. “Changing its genetics in any way almost always makes an organism less fit for the wild. You’ve ‘detuned’ it.”

The similarity of the wild-type zebrafish and Glofish made it possible to test mate competition and mate choice simultaneously, which few studies have done, Howard said.

“I’ve lectured on evolution for 25 years and never found a study that linked the mechanisms of evolution with the pattern of evolutionary outcomes,” he said. “This study puts the whole story together.”

The study also showed the effectiveness of a model Muir developed to assess the potential risk posed to natural populations by transgenic organisms. The model, which measures six fitness components, can be used to predict what would happen if a particular transgene were released in the wild. Its premise lies in a simple principle: If a transgene makes an organism fitter than wild types for an environment, it could pose a risk to natural populations or the ecosystem. If a transgene makes the organism less fit, the gene will be weeded out of the population over time.

“Darwin was right: Survival of the fittest works,” Muir said. “If we make a transgenic organism that has reduced fitness in the wild, evolution takes over and removes it. Nature experiments with mutations all the time, and it only saves the best of the best.”

Based on the model, the researchers predicted that wild-type males would chase other males and females more than Glofish males would, have greater success in securing mates and produce more offspring. The laboratory findings confirmed their predictions.

The study shows that if Glofish were released into the wild, the transgenic trait would eventually disappear as the result of sexual selection.

Muir stressed that “the model does not say that even if we find no risks, we should release transgenic fish into the wild. It simply says what would likely happen if we did.”

The model can be applied to genetically modified plants as well as animals and is one tool used by the U.S. Food and Drug Administration to assess potential risks posed by transgenic organisms, he said.

Glofish are the only transgenic animals approved for sale to the public by the FDA.

The paper was published in Evolution Thursday (May 7) and is available to journal subscribers and Purdue readers at http://onlinelibrary.wiley.com/doi/10.1111/evo.12662/full.