There’s a new species of tiny, deepwater dartfish described from Japan… Navigobius asayake, the Sunrise Dartfish. It’s just the fifth species to be named in this obscure little genus, but let’s take a moment to delve further into this “discovery”.

First, a little background. Navigobius probably won’t be a familiar name to your average aquarist, but it belongs to the same group as the more common dartfishes, Ptereleotris and Nemateleotris. However, unlike those two genera, which are largely shallow-water and reef-associated, Navigobius is instead limited to silted mesophotic environs, with records occurring to at least 150 meters deep. The genus was still scientifically undescribed as recently as 2009, though these fishes had previously been known to recreational divers in Japan and from trawled specimens reported as far back as 1995.

Navigobius dewa was the first to be named, from 3 specimens collected by hand at 70 meters courtesy of a Mr. Shinichi Dewa. It is unequivocally a beautiful fish, full of pink and yellow vibrancy. This would soon be followed by the unimaginatively named Brunei Dartfish (N. vittatus), described  in 2015 from (you guessed it) Brunei. Next up was Kaguya’s Dartfish (N. kaguya), known from Japan and the Philippines, the latter country being the source of occasional aquarium specimens. There’s also a very similar fish in the Maldives that may or may not be this same species, and it too also sometimes pops up in aquarium exports.

There was also the short-lived reign of N. khanhoa, an enigmatic species named from trawled specimens collected around Vietnam, subsequently reintepretted as being a juvenile of an entirely different gobioid group, the Oxymetopon ribbongobies. And that brings us all up to date. Each of these three valid Navigobius dartfishes has a very unique morphology to its dorsal fins, to go along with diagnostic differences in their color patterns.

This is where the Sunrise Dartfish (N. asayake) enters the picture, described in a recent edition of the journal Zootaxa. Unlike these other species, each of which can be readily identified with a quick glance, N. asayake is virtually indistinguishable from the sympatric N. dewa. Both have the same short, elongated shape to their dorsal fins, to go along with seemingly identical color patterns. The one stated difference here is the assertion that the lower caudal fin lobe of N. asayake is lacking the thin purple margin found in N. dewa, though this must be taken with a grain of salt, as the illustrated specimens are either badly damaged or appear unpigmented.

The diagnostic traits used to define this new dartfish instead relate mostly to some subtle morphological discrepancies noted between the four specimens used to describe N. asayake and the three specimens used to describe N. dewa back in 2009. This is, needless to say, not an especially large set of data to make a convincing morphological argument, especially given the homogenous phenotype of these fishes and their overlapping range in the wild. Making matters worse, these type specimens are of different sizes. The four specimens of N. asayake range from 45-52mm, while the three specimens of N. dewa range from 37-45mm. 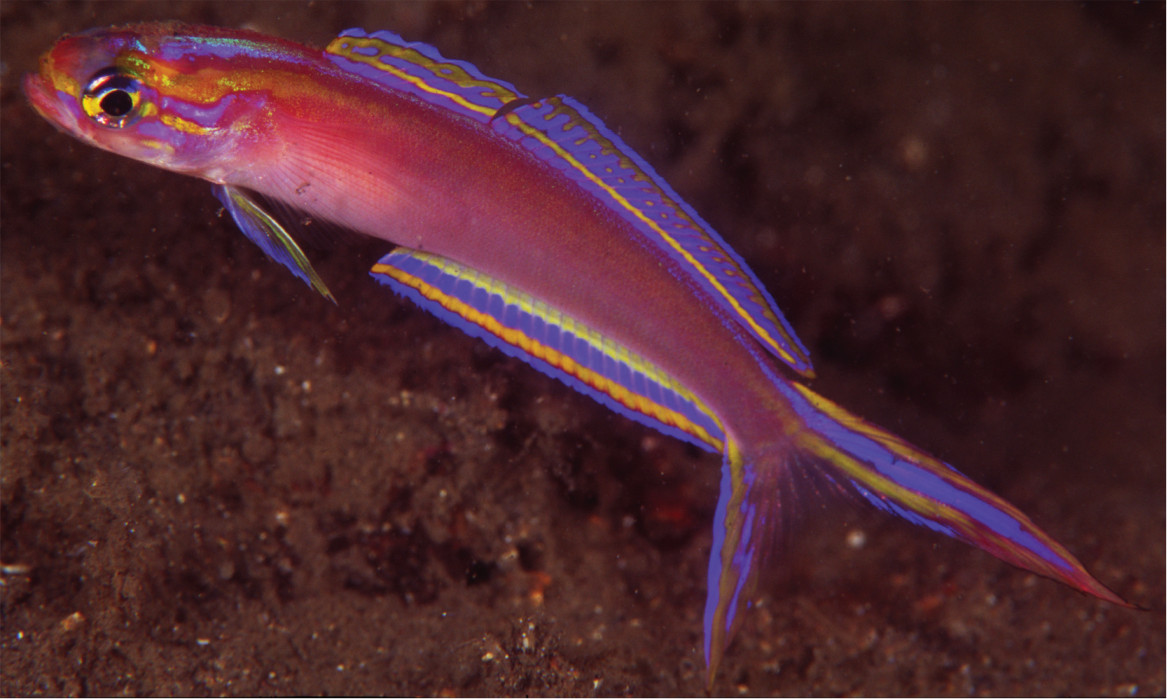 The alleged differences between these two are as follows: N. asayake has 1-2 additional pectoral fin rays (which might be explained by their being larger in size than the N. dewa specimens), a very slightly larger head (again, this may be explained by the specimen sizes or even the preservation method), a slightly larger eye (though the stated range for this feature overlaps with N. dewa), and shorter pelvic fins (though this could just be a result of the specimens being damaged or their relative age and sexual development). The obvious question to ask here is whether any of this warrants the creation of a new species when a simpler explanation might suggest that this is just the natural variability of a single species.

Again, these two fishes look the same… they are found in the same region… in the same depth range… in the same habitat… and the differences used to distinguish them either overlap or can be explained away by the limited number of specimens studied. There is no genetic data offered here, nor is there a decent photo of N. asayake which one might be able to look at and say, “oh, yes, this fish looks different from N. dewa”, nor has the existence of this alleged species ever been suggested by the divers who encounter them in the wild. Instead, all we have is a name that will linger on until someone is able to prove it otherwise. In taxonomy, it is far easier to create than to destroy, and so the existence or non-existence of the Sunrise Dartfish will be an open question until the matter is studied in greater detail.