New and unusual coral species may shake up coral taxonomy 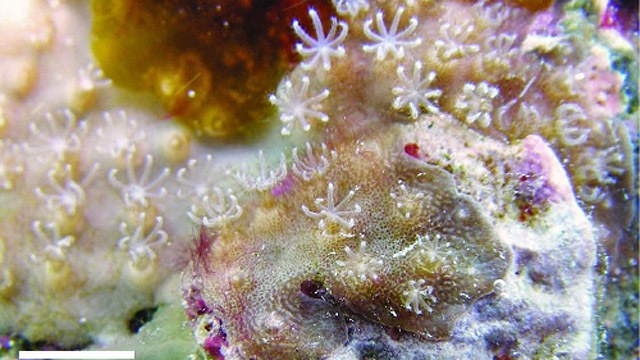 Unlike scleractinians, most octocorals lack a hard skeleton, and therefore many have the common name “soft coral”. One exception is the endangered genus Heliopora, known as blue coral, which is found in tropical locations in the Pacific Ocean.

Blue coral forms a massive skeleton of aragonite calcium-carbonate. Due to this unique feature, blue corals have long been placed within their own special order inside the octocorals.

This new species, named Nanipora kamurai, also has an aragonite calcium-carbonate skeleton, and molecular analyses show the two groups are most closely related to each other among all octocorals. As fossils show that blue coral and their relatives were globally distributed during the Cretaceous period (XX-XXX mya), Heliopora and this new species can be considered “living fossils”.

In the past, another octocoral species with an aragonite skeleton, Epiphaxum, was discovered in 1977. Since 1977, several recent and fossil Epiphaxum specimens from the deep sea have been recorded. Although this new species seems to be morphologically close to Epiphaxum, it is classified in a separate genus inside the same family (Lithotelestidae) due to many structural differences.

Perhaps most surprisingly, Nanipora kamurai was found from a very shallow coral reef of <1 m depth. “Most living fossils from the ocean seem to come from deeper, more stable environments” stated Miyazaki, “suggesting that there are important discoveries on coral reefs even in shallow areas still awaiting us.”

“The diverse and pristine reefs of Zamami Island, which was recently included in a new national park, need to be investigated even more”, he added.

The discovery of this species undoubtedly will give new insight on octocoral taxonomy.