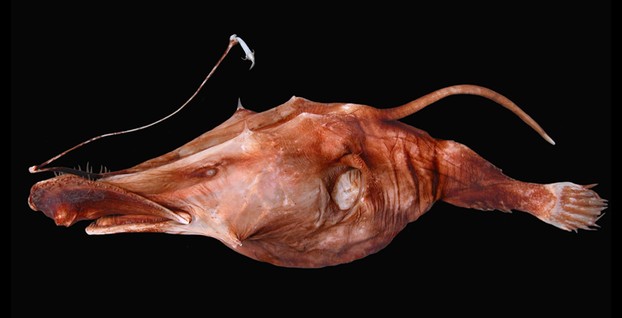 A new species of angler fish was discovered  in the Gulf of Mexico. Three female fish were just found there, and have been named ‘Lasiognathus dinem’. Tracey Sutton, a researcher from Nova Southeastern University and Theodore W. Pietsch, from the University of Washington discovered the new species.  “I recognized it as a new species fairly quickly because it was so distinctive,” said Sutton. Sutton and Peitsch’s findings were published in the Copeia Journal. The fish were found 3500-5000 feet below the surface.The new species ranges from 1 to 3 1/2-inches long. As is typical of angler fish, the fish have a spiky jaw and a typical pole like structure coming from the top of their head, which is the source of their bio-luminescence. It also serves to attract and confuse potential prey in the deep depths of the ocean where no sunlight penetrates. Deep sea fish are not widely known or studied by scientists or researchers, due to the difficulty of observing these fish in their natural habitats. Until recently, they were rarely seen by humans. There is certainly a wide ocean fo fish still to be discovered by scientists and researchers alike. These three fish will be studied at the University of Washington, in the World’s largest deep sea angler-fish collection.