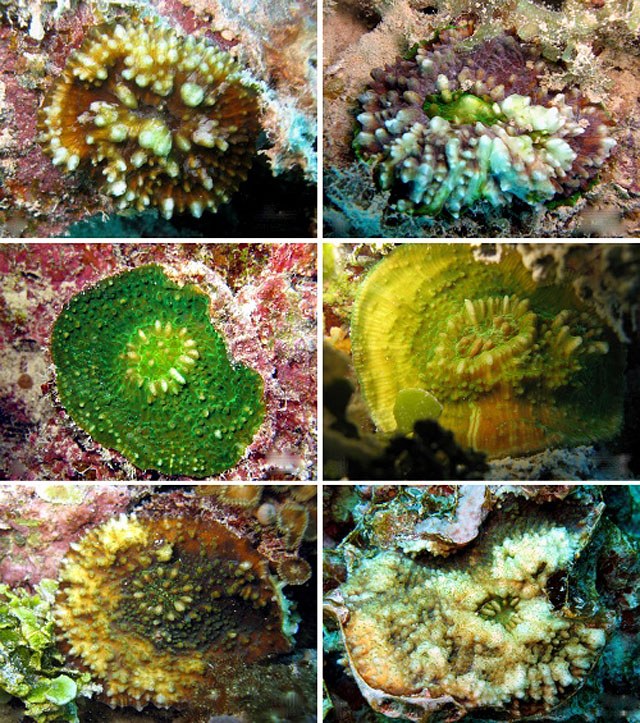 
The new species Echinophyllia tarae is described from the remote and poorly studied Gambier Islands, French Polynesia. Although the new species is common in the lagoon of Gambier Islands, its occurrence elsewhere is unknown. Echinophyllia tarae lives in protected reef habitats and was observed between 5 and 20 m depth. It is a zooxanthellate species which commonly grows on dead coral fragments, which are also covered by crustose coralline algae and fleshy macroalgae.

This species can grow on well illuminated surfaces but also encrusts shaded underhangs and contributes to the formation of coral reefs in the Gambier. It is characterized by large polyps and bright often mottled colourations and it is very plastic in morphology like most hard corals. Patterns of partial death and recovery of the species were often observed and could be due to competition with other benthic invertebrates like the soft-bodied corallimorpharians or zoanthids which can co-occur with this species.

Stony corals are currently under threat by the effects of global warming, ocean acidification and anthropogenic changes of reef structures. Although corals represent a relatively well studied group of charismatic marine invertebrates, much has still to be understood of their biology, evolution, diversity, and biogeography. The discovery of this new species in French Polynesia confirms that our knowledge of hard coral diversity is still incomplete and that the exploration efforts of recent scientific expeditions like Tara Oceans can lead to new insights in a remote and previously poorly studied locations.

This species is named after the Tara vessel which allowed the exploration of coral reefs in Gambier. Moreover, the name “tara” in the Polynesian language may refer to a spiny, pointed object, which applies well to the new species typically featuring pointed skeletal structures. In the same language, Tara is also the name of a sea goddess.