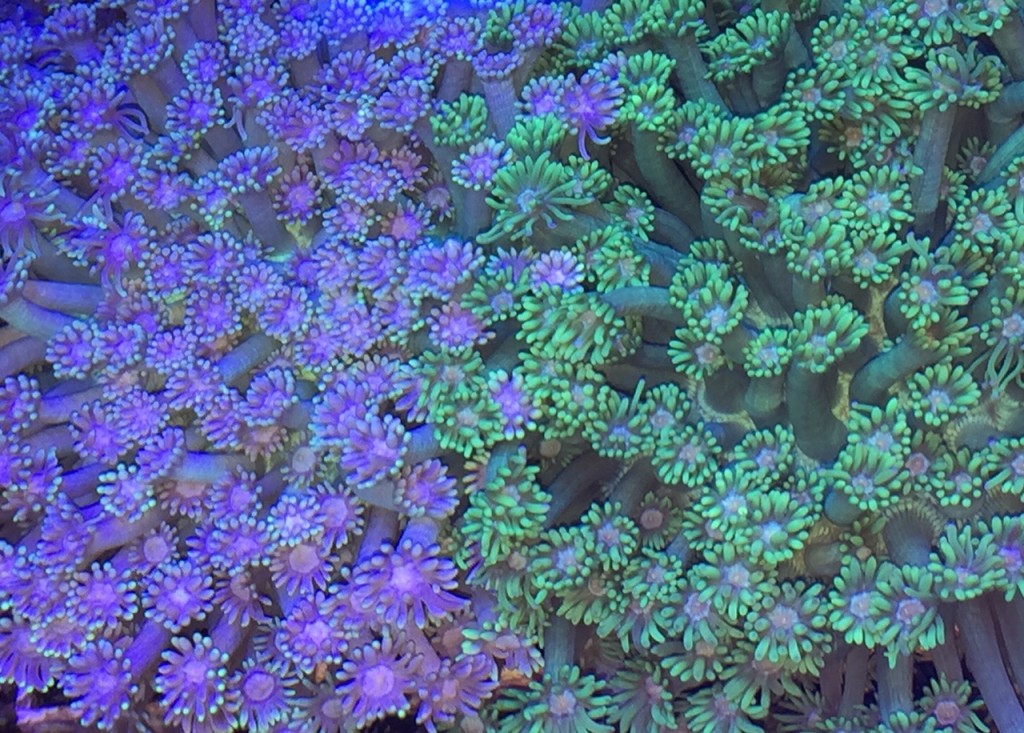 This is an exciting hobby and profession to be a part of. The smartest people I know are continually surprised and dumbfounded by the new discoveries that are constantly made, and all the questions that are yet to be answered.

I am fascinated by the variability in captive grown coral lines. There have been many studies on chimerism in coral, and this explanation describes certain characteristics in some of the imported coral colonies I have seen. However, as I have farmed more and more coral long-term, I have seen certain variations and mutations show up in some of my asexually-propagated coral clone lines that defied this explanation. 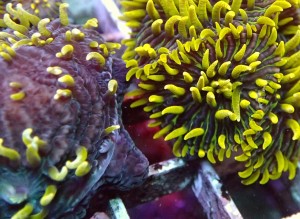 Due to the fact that this “color change in clones” phenomenon kept popping up, I decided I would take this opportunity to see if I could maintain any changes in future clones from that gene  line. One happy byproduct of that research is the Project X and Project X2 line of Fungia. Project X is by itself an exciting animal, normally a free-living, single-polyp coral, that is now content to encrust and produce a multitude of mouths. The X2 is is just as fascinating as the original Project X, but all frags from this lineage sport bright green stripes going right into the middle of the oral disc, brighter and greener tentacles, and the propensity to produce more mouths and lobes. Determined to prove to myself that the effect wasn’t merely induced by odd flow or differences in light, I grew a few dozen of Project X and X2 together in various lighting and flow schemes for over a full year. The same color and morphology differences persisted in each line. That is when I decided that it was appropriate to give the disparate clone line a label of its own, since its downstream mutations were over multiple generations, next to clone lines from the same original mother.

Goniopora continue to be one of my all-time favorite animals. In fact, I am writing this post today because I saw, out of the corner of my eye, two of my treasured Goniopora mother colonies. There was a paper published this spring related to such an observation that had me all excited about the topic again. (More than one genotype: how common is intracolonial genetic variability in scleractinian corals?).

I have been keeping  this line of Goniopora norfolkensis since 2009. It has been through countless generations of fragging and refragging. I’ve been growing a line of these particular Goniopora in New York for the last 3 years, started from less than half a dozen frags of the original line. 4 generations later, one of the colonies I set aside as a mother started to take on a color change. It became higher contrast, and silver highlights popped up where previously, it had just been green. I originally thought that the colony was bleaching a bit for some reason, even though colonies surrounding it were showing no signs of stress. 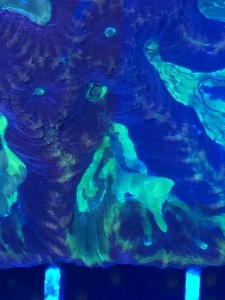 It is common knowledge that coral will change color, sometimes quite drastically and quickly, depending on environment. This color change has many variables that contribute to the overall effect. There are two main sources of pigment in coral: the corals’ own cells, and various symbionts living in or on the coral including, but not limited to, Zooxanthellae, Cyanobacteria, and Thraustochytrids. As far as we know, most colors (other than brown) are produced by the coral cells. The recently-published paper describes data that shows evidence of mutations in the corals arising from DNA changes in their stem cell lines during asexual reproduction. Coral colonies recruit stem cells from the fastest-growing portions of the colony to repair damage or add to quickly-growing tissue. If any one of the stem cells mutates enough in a way that is noticeable and has enough time to propagate enough tissue of that colony, the aquarist may see significant and irreversible change in the color or growth of that clone line.

We also know that coral may swap various symbionts, which also affects color, directly or indirectly. My observations and the published literature lead me to believe that with careful craftsmanship, ideal color and growth forms can be teased from domesticated lines of coral and symbionts, and with the proper methods, “fixed” and expressed in downstream propagation of those coral lines.