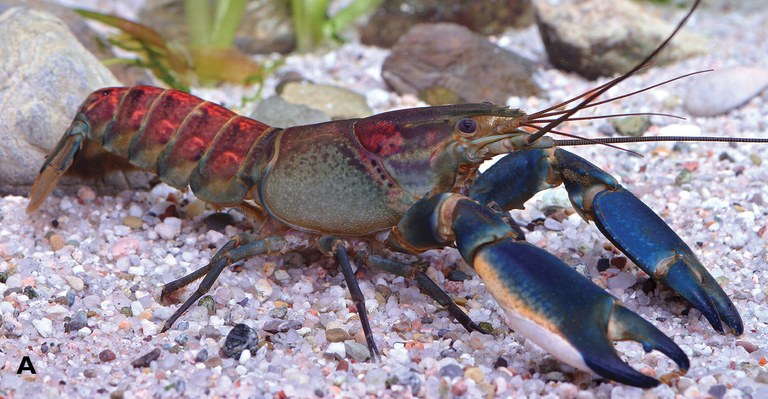 
Cherax warsamsonicus is endemic to the freshwater tributary of Warsamson River, for whom it was named after.  According to the ZooKeys paper, “the creeks from where these crayfish have been collected are shallow (20–60 cm) with a moderate flow, the water is clear, and have a pH of approximately 6.5. In most of the parts no water plants are present. The substrate of the creek is gravel or sand and soil mostly covered with silt and detritus, stones and larger rocks. Crayfish hide in short borrows in the riverbank, under lager rocks or in detritus that gathers in slower flowing parts of the creek or river.” A photo of its natural habitat is seen below.

Like most of the newly described crayfish, C. warsamsonicus has already entered the aquarium trade, where it is referred under the common names Cherax “irian jaya”, Cherax “pink coral”, and sometimes mistakenly sold as Cherax pulcher, another West Papua crayfish species;  C. pulcher (AKA the blue moon crayfish) is another recently described and drop-dead gorgeous crayfish we reported on in 2015.  Aquarists contributed to the formal description of the new species by providing specimens for measurements.