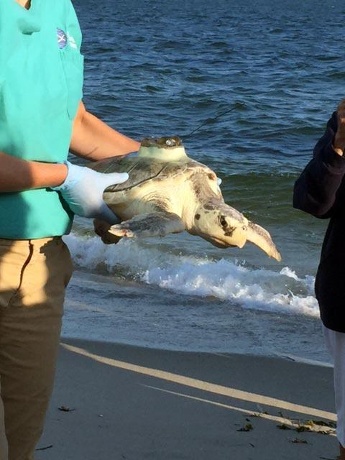 Eight Months after their stay at the New England Aquarium, four sea turtles have been released back into the ocean. The three Kemp’s Ridley and one Loggerhead turtle were found stranded on Cape Cod last Fall due to water temperature problems. The turtles were successfully transferred to the aquarium for rehabilitation at the New England Aquarium Animal Care Center. The Center was established in 1968, with its goal to rescue and rehabilitate injured and diseased marine animals in the New England Area. On an average year, volunteers from the Massachusetts Audubon society comb the beaches and rescue up to 90 sea turtles per year looking for stranded sea turtles. The Kemps Ridley Sea Turtle is the most endangered sea turtle in the World.The Aquarium estimates that an overage 90 sea turtles are brought by volunteers to the aquarium. These four turtles, like many others, suffered from hypothermia, pneumonia and organ damage. The turtles were treated by veterinarians on staff at the aquarium. The success rate at the Aquarium is phenomenal, with over 90% of all turtles who arrive being released back into the Ocean. This is awesome work. You can follow the Marine Animal Rescue Team blog here. What this team does is crucial to these sea turtles lives, every life counts to ensure the survival of this beautiful species. MORE