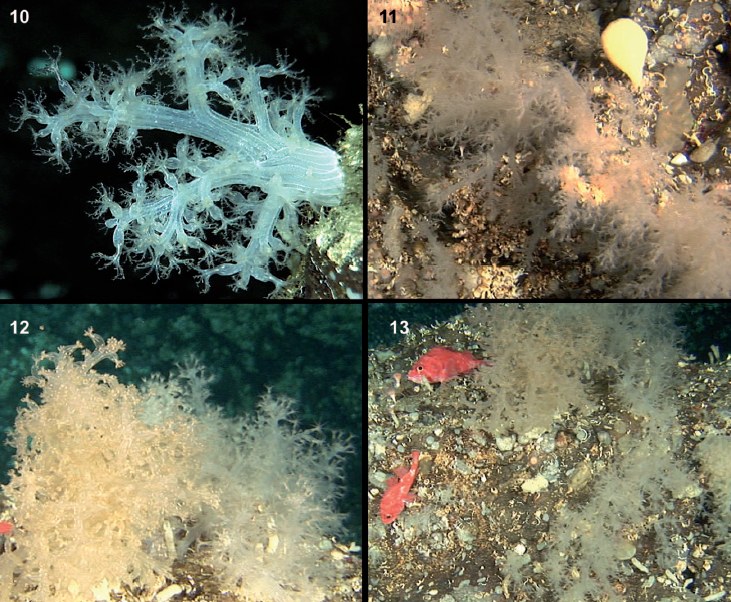 In situ photographs of the new species. Photographs by A. Klapfer and S. Blum.

It is not often that a new family of coral is found and described by scientists. In 2010 Ofwegen & McFadden described the family Acanthoaxiidae from the shallow waters of tropical Cameroon. The one just before that was described in 1977 by Bayer & Muzik, who added the family Lithotelestidae. Published this week in the journal Systematics and Biodiversity, researchers Breedy, van Ofwegenc, and Vargas formally describe a new deep water family, Aquaumbridae, and its first member: Aquaumbra klapferi sp. nov., gen. nov.

The new family of coral, Aquaumbridae, is found at Isla del Coco, Costa Rica down in the aphotic zone, where less than 1% of available sunlight penetrates.  The researchers found this new family populating seamounts, ridges and canyons out on the insular shelf (or submarine plateaus) of Isla del Coco. It’s characteristics are similar to the coral families Nidaliidae, Nepththeidae and Alcyoniidae, which include soft corals such as Sarcophyton spp., Sinularia spp., Capnella spp., Dendronephthya spp., and other popular aquarium corals. The key difference of this new family is in their sclerite structure.

Sclerites are the tiny, needle-like structures within many soft corals that help provide structural support for their soft tissues. For soft corals, sclerite structure is very specific amongst species and is used in describing one species from another. Sclerite structure varies throughout the coral animal with polyps having one morphology, tentacles having another, and so on as can be seen below:

According to Breedy’s group: “The new species represents the first discovery of a soft coral in an eastern Pacific oceanic island and along the eastern Pacific waters in general, and provide hints of the biodiversity of the largely unexplored deep waters of the tropical eastern Pacific.“