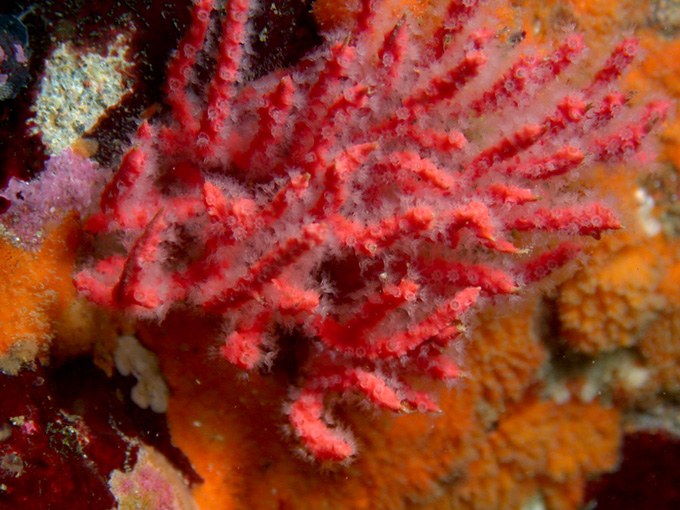 
Costa Rican researchers at the Smithsonian and the University of Costa Rica named a new coral species, Psammogorgia hookeri, for Yuri Hooker, biologist and naturalist at the Peruvian University Cayetano Heredia in Lima, Peru.

Collected by scuba divers from rocky ledges at depths to 25 meters in Peru’s Paracas National Reserve, its hand-sized colonies are slightly smaller than the colonies of their closest relative. Researchers also found bits of coral attached to mussels from Independence Bay at a local fish market.

“This new species may be an endemic: found nowhere else in the world,” said Hector M. Guzman, marine biologist at the Smithsonian Tropical Research Institute. “But coral reefs and coral communities in Peru have never been systematically studied. We expect more surprises as we look at new collections.”

Odalisca Breedy, lead author of the new species report in the Journal of the Maritime Biological Association of the United Kingdom, and Guzmán are experts in soft coral taxonomy and ecology. To date, they have discovered nearly 25 new species of soft coral in the Pacific. Their new species was identified based on colony characteristics and examinations of the coral using both light and scanning-electron microscopy.

Breedy and Guzman compared the new samples with specimens at Peru’s Ocean Institute, IMARPE and at the Yale Peabody Museum of Natural History. Most of the museum specimens were more than 90 years old, because no one has collected in this area in recent times. “As we move across the eastern Pacific, we realize that our knowledge about soft corals still is poor,” said Breedy. Both scientists agree that “We need to continue exploring new shallow and deep water sites but funding is always a limiting factor.”

“With logistical support from the Peruvian National Protected Areas Service, SERNAP, we’re beginning to discover the amazing biodiversity of corals and marine invertebrates in the Peruvian Pacific,” said Hooker. “It’s mostly a matter of looking in the right places and inviting experts who can identify these relatively unknown and unstudied creatures.”